Our talented engineers have spent the last month building a new internal system to handle dashboard queries, resulting in significantly faster dashboard performance speeds! In a nutshell, they’ve built a distributed query engine that splits up complex queries into chunks and runs the computations in parallel, resulting in faster dashboards for you. 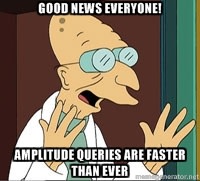 Almost all queries will now run in less than 10 seconds, with more complex queries (ie. involving multiple event property filters/group bys, or spanning several months of data) taking no more than 60 seconds. We’d love your feedback on this new system – if you experience queries taking longer than a minute, please let us know so we can investigate how to make them faster!

You can now upload your own list of users into the Cohorts Tab and then see that cohort as a segment on pages like Funnels and Retention. This allows you to construct a complex cohort in Redshift or your own internal system and then see those users in action in the dashboard. To use this feature, click on the “Upload Cohort” button on the Cohorts Tab and select the file you want to upload. You can upload a CSV or text file containing either a list of user_ids or amplitude_ids.

We’ve made a slight change in the way we count funnel conversions. Users will now only be counted as converted in a funnel if they have completed the actions in the funnel within 30 days of entering the funnel.

Our old system would give all users who entered the funnel 30 days from the last date in the time series to convert (so in the example above, all users would have until January 31 to convert). That wraps it up! As always, if you have any questions or feedback, you can find us at contact@amplitude.com.