There have been many companies that have gone from product monopoly status to being ripped out of the market by their competitors.

Establishing a monopoly — near-total domination of a market — may seem like the ultimate marker of success. You’ve edged out your competitors, and have the ubiquitous product in your sector. But having a wildly successful product can be dangerous. It can take your focus away from product development, and shift time and attention towards beating competitors and securing your business with sales and marketing. This can seem like the right decision in the short-term, as ramping down on R&D decreases your operating expenses and exposes some fat profit margins. However, that shift in focus can cripple you down the line. It can take behemoth companies and bring them to their knees. As Steve Jobs said in a legendary interview with Bob Cringely, “The product genius [that] brought them to that monopolistic position gets rotted out by people running these companies who have no conception of a good product versus a bad product… they have no conception of craftsmanship that’s required.” There have been many companies that have gone from product monopoly status to being ripped out of the market by their competitors. We’ll look at this phenomenon in three of the biggest names in the history of tech: IBM, Xerox, and Apple itself (circa 2017).

IBM and the fear of cannibalization

In the mid-1970s, the personal computer was emerging as a new consumer-ready technology. With Apple looking to dominate the market, IBM quickly built their own version of a personal computer. It seemed like everything was set for IBM to become a major force in the blossoming PC market. But then management began to fear that the PC would cut into their mainframe computer monopoly. Instead of delving into their products to understand the future of computing, IBM played it safe to keep turning a profit. That profit was short-lived. By the mid-1980s, IBM’s profits were ready to tank. Their PC venture never became a success, ending when they sold the floundering business to Lenovo in 2009. 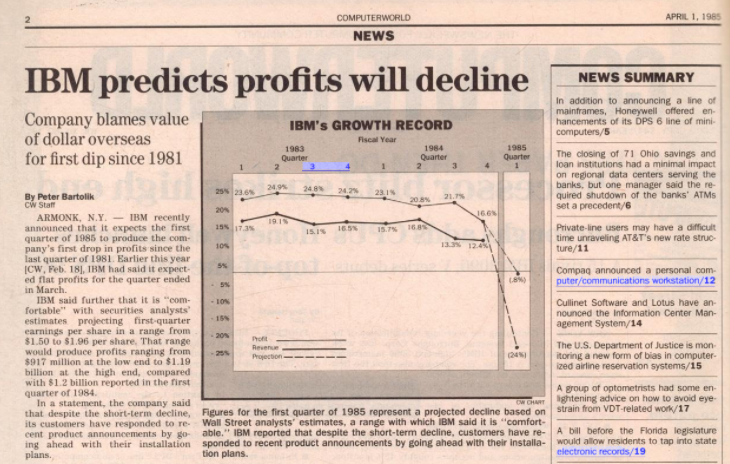 An article printed in Computerworld on April 1, 1985 shows IBM’s falling profits. Source. IBM was so scared of losing profits from their mainframe computers that they refused to take a chance on the PC. Little did they know, the PC would eventually find its way into the hands of 73% of adults in the U.S. When journalist Peter Drucker wrote about IBM’s demise for the Wall Street Journal in 1993, he said they had committed the “deadly sin” of “slaughtering tomorrow’s opportunity on the altar of yesterday.” Risk aversion like that exhibited by IBM comes from a misguided idea that what has been profitable will always be profitable. Especially with technology, there’s no guarantee that a product of today will be relevant tomorrow. If IBM had been willing to follow through with their PC model, even knowing that they would lose some mainframe business, they could have come out on top. Mainframe business dissolved anyway, leaving them without either product to bring in revenue.

You know a product has penetrated the market when the name of the product becomes the a generic trademark. Like Kleenex stands in for tissue and “Google it” has replaced “searching the Internet,” “Make a Xerox,” means “Make a copy.” But Xerox’s eponym status and total monopoly on the industry did not guarantee the brand’s long-term success. In the 1970s, Xerox started to spend more time focusing on their margins than on their product. They added bells and whistles to create a product with a premium pricing plan that brought in money, but alienated customers who needed a simple copy machine. Then came Canon, a Japanese company with a cheap copier that converted the customers who had been ignored by Xerox’s fancy upgrades and price hikes. 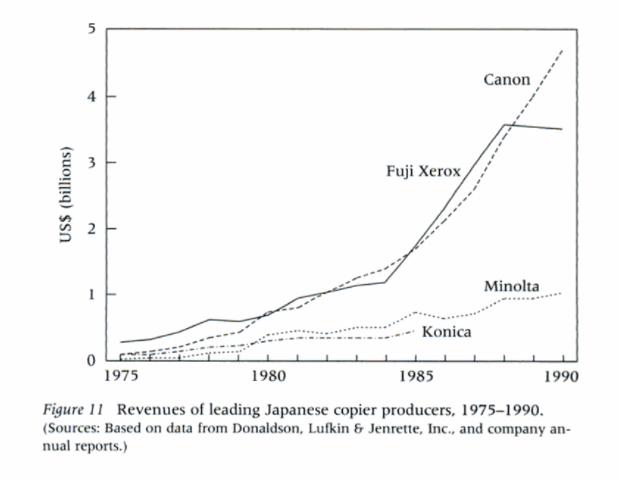 Revenues of leading Japanese copier producers 1975-1990. Source: The Alliance Revolution: The New Shape of Business Rivalry Worse, Canon wasn’t just vying for the copier market. They focused on a diversity of products, acquiring patent after patent — from toner, to better camera components, to novel digital technologies. Xerox, meanwhile was so narrowly focused on making money off of copiers that they neglected investment in a product research system. By the mid 1980s, Xerox was failing to regain their hold on the market. Today, Xerox is in control of the production printer market, but isn’t in the top 5 for the hardcopy peripherals market (printer, multi-function printer, digital copier), where Canon sits in second place. Canon’s non-printer business has also paid off, leading it to number one in interchangeable lens digital cameras, whereas Xerox, despite acquisitions, has relegated itself almost entirely to copying. Xerox’s desire to profit off its copy machine monopoly prevented breakthrough development of that product. Upselling can be great for your profit margins, but additions to a product should add value, especially if they lead to a price increase. Tip to product managers of today. Do not view success of one product as a free pass to slow down development elsewhere. If you’ve finally got the resources to propel new projects forward, don’t waste them.

For Apple, the jury’s still out

Apple’s history is riddled with ups and downs. The jury is still out as to whether or not their current iteration has gone full marketing machine and lost touch with their products. It might seem as though they’ve taken somewhat of a Xerox approach to their product lines, making expensive tweaks to existing products. The iPhone, for example, has become increasingly similar with each iteration, and the MacBook Pro remained virtually untouched for years. This is a sharp contrast from the 2000s, when consumers saw innovations and new products from Apple every few years. From one perspective, it looks like they’ve paused developing new products in favor of extracting profits from existing ones. “Apple under Cook has doubled its revenues to $200 billion while doubling profit and tripling the amount of cash it has in the bank (now a quarter of _trillion dollars),” _entrepreneur Steve Blank wrote in October 2016. “The iPhone continues its annual upgrades of incremental improvements. Yet in five years the only new thing that managed to get out the door is the Apple Watch.” The problem, Blank argues, is that Steve Jobs chose a successor focused on execution, not on vision or product. “Execution CEOs value stability, process, and repeatable execution,” Blank says, “This culture shift ripples down from the top and what once felt like a company on a mission to change the world now feels like another job.” On the other hand, what looks like complacency could be the silent stirrings of a revolution. Take their latest release of the AirPods, for example. Their proprietary W1 chip has far better device pairing and performance than ever before. It’s essentially a little computer in your ear. Although the headphones themselves aren’t exactly disrupting the entire market, they could be a taste of what’s to come. Consider how consumers first received Touch ID compared to how integral it is for so many of us today. It wouldn’t be the first time Apple had introduced a product that was somewhat uninteresting at first and became a cornerstone of their universe later. As Ben Thompson writes in Stratechery, “Apple’s willingness and patience to lay the groundwork for new features over multiple generations remains one of its most impressive qualities.”

Companies of all sizes and stages can learn from the mistakes of IBM, Xerox and Apple. When you pause developing products in favor of chasing profits, you lose what made you profitable in the first place. For these companies, risk aversion set in — and that’s a trap anyone can fall into. When you have a profitable product monopoly , the stakes of venturing into a new market segment are high. The desire to cling onto the “safety” of your current product can be incredibly strong, but this thinking won’t always benefit your company. Of course, market your successful products, look for opportunities to upsell and find ways to increase your margins. But stay focused on innovation, whether that’s a better version of your old product, or cracking into a new market entirely. In other words, don’t rest on a product monopoly to maintain your success. Invest in refining what you already have but not at the cost of exploring other ideas.