Crunchyroll, the world’s most popular anime brand, connects anime and manga fans across 200+ countries and territories with 360-degree experiences. In addition to Crunchyroll, they have a full suite of brands: Anime Digital Network (in partnership with Citel, a subsidiary of Média-Participations), Anime on Demand, KAZÉ, and Eye See Movies.

One revenue channel centers on driving subscription growth through freemium VRV and Crunchyroll offerings. Part of Crunchyroll’s value proposition is nurturing fan communities, to increase AVOD engagement or convert them into paying subscribers.

“When I got here three years ago, we were more focused on running as fast as we could to find product-market fit,” said Jerry Fan, Crunchyroll’s Head of Growth. “After we saw significant traction, we realized that we needed to take a closer look at how to optimize.”

The Crunchyroll team is driving initiatives to expand the 360-degree community “Amplitude gives me confidence in the changes we’re making.”Jerry Fan, Head of Growth at Crunchyroll experience that they offer their members. As they create and release more content experiences, they rely on Amplitude to understand the impact and guide insight into conversion and retention.

We spoke with Jerry about the numerous ways Amplitude is revolutionizing product development at Crunchyroll: “Amplitude gives me confidence in the changes we’re making,” Jerry said.

Crunchyroll expected that some users would enjoy their broader VRV platform and rolled out three different packages. To avoid confusion, Crunchyroll was mindful about clarifying the offering of each pricing bundle. The goal was to avoid unnecessary confusion by helping customers know exactly what to expect from each plan.

When Crunchyroll analyzed their new offerings in Amplitude’s Funnels and AB Test View, they initially saw a slight increase in immediate conversions among users who chose a price plan and began their free trial.

“Data insights and product improvement go hand-in-hand. Amplitude lets us learn at scale; we track the performance of every release so that we can learn and iterate at each step.”
Jerry Fan, Head of Growth at Crunchyroll

But, using Amplitude, Crunchyroll was able to dig deeper into the analytics. With user segments, the team could compare the impact on ARPU for multi-tiered pricing versus their single-tier control. The change made it possible for the team to confidently pursue a more data-informed pricing strategy. 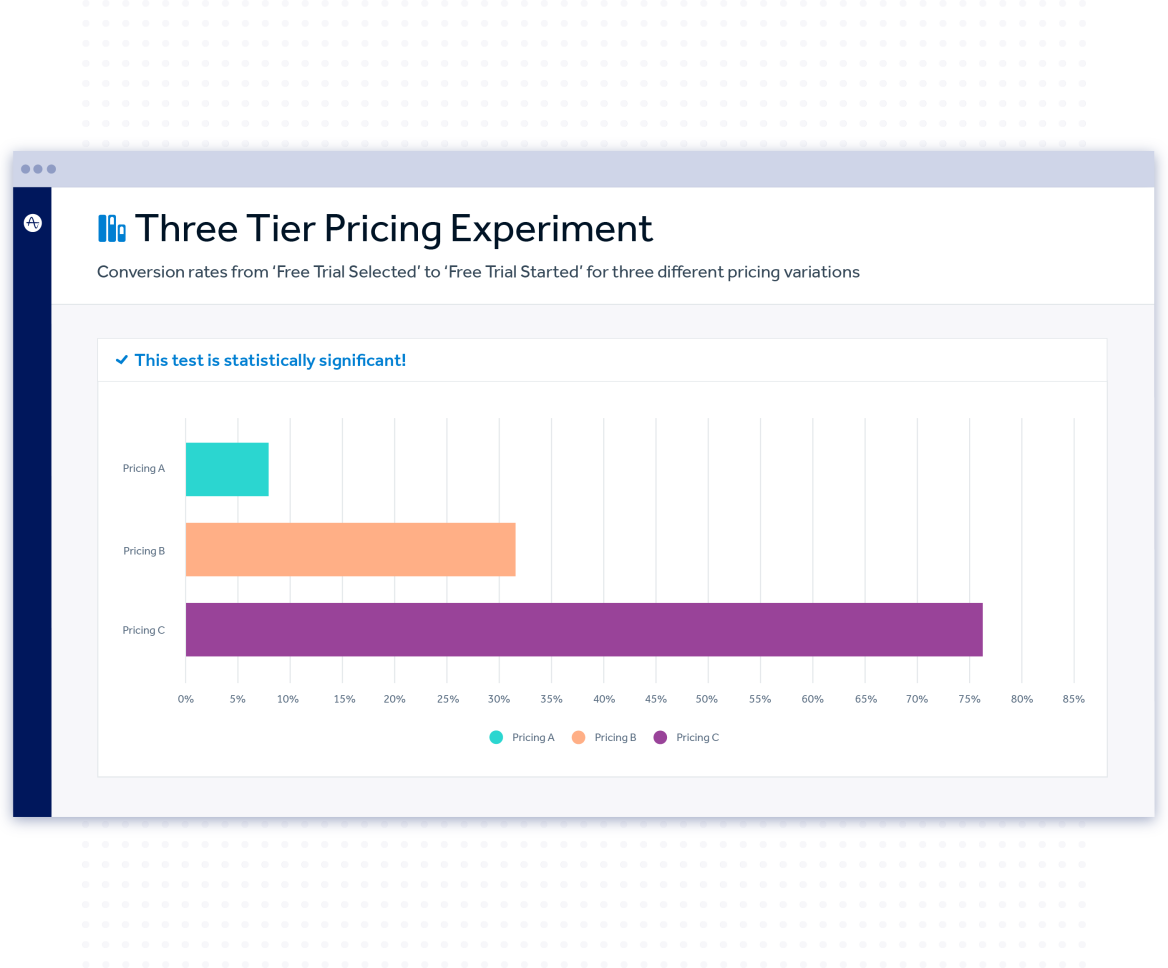 Looking at the immediate impact, this netted out to increase in conversion—and more importantly, a 12% increase in ARPU because Crunchyroll was able to segment users by providing more value at higher tiers.

In another experiment, Crunchyroll wanted to understand which product in their bundle of streaming content was most attractive to users. The marketing and product teams collaborated to test which partnerships were most valuable to users.

“The more collaborative teams are, the more that teammates can learn from one another. With Amplitude charts, for example, you can get inspiration from your co-workers but still create your own version. That way, you can customize charts to the exact view you want to see.”
Jerry Fan, Head of Growth at Crunchyroll

The Crunchyroll team used Amplitude’s Cohorts to select two cohorts of users—controlled for the same behavior—and A/B test a campaign with two different partners. Both partners showed relatively equal chance to activate users based on the click-through rate of from the email campaigns.

However, when they dug deeper by applying their two cohorts to a Retention chart, they found that users used one partner provided more value to their users and drove longer-term retention.

Quantitatively, the difference in retention (defined by DAU of Crunchyroll users that use the partners’ services) between the partners was 8X after 6 weeks. Qualitatively, it allowed Crunchyroll to understand which type of services their users say they want versus which type of services they actually use. In short, even though users demonstrated an interest in both partners in equal measure, the user behavior on the two partner services was drastically different. 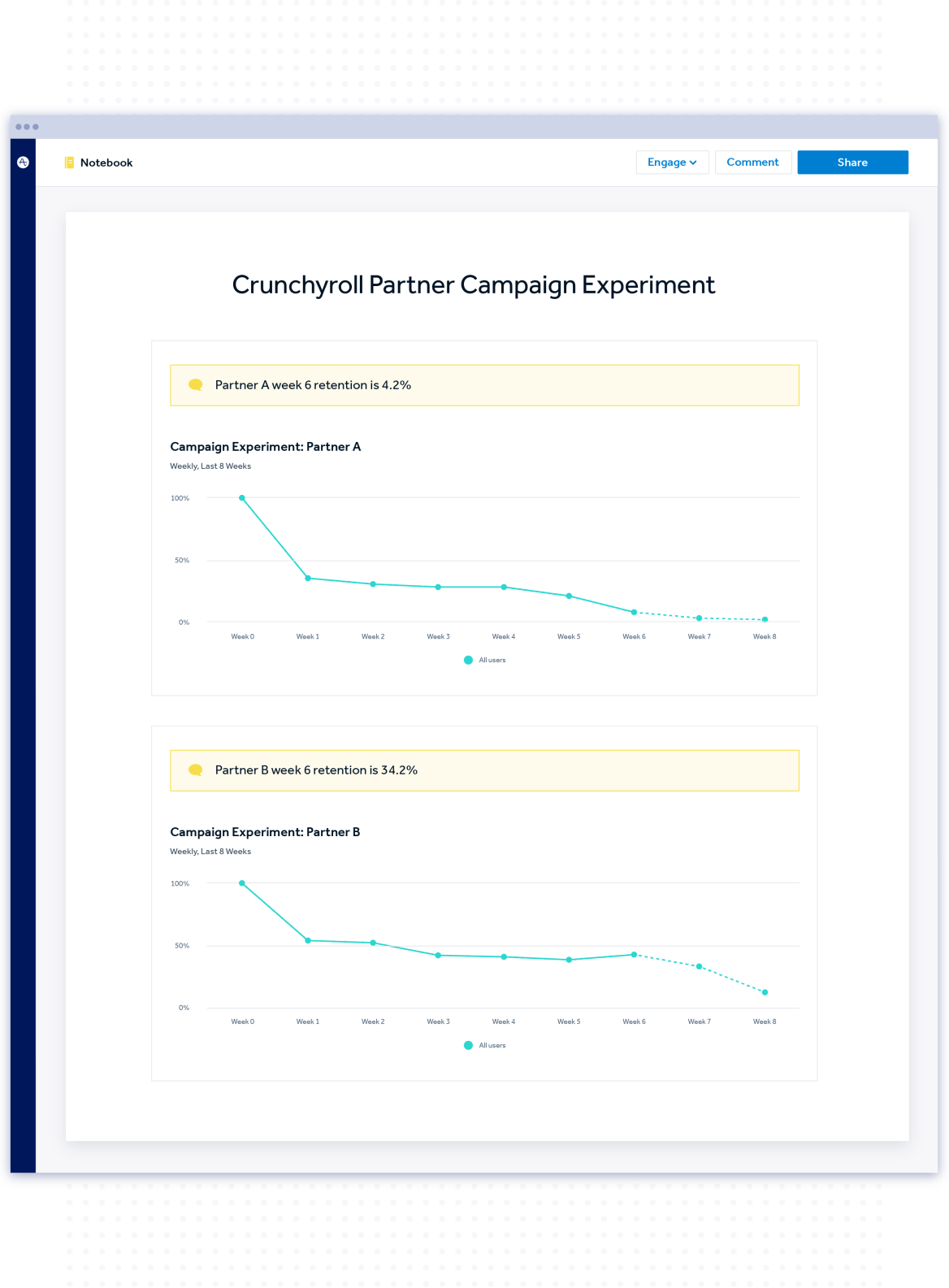 Data-driven strategy, from infrastructure to advertising

Product data is useful to more than just our PMs. By understanding the measurable impact of features, Amplitude insights empower our engineers to weigh in on data-informed product decision making. — Jerry Fan, Head of Growth at Crunchyroll

“The biggest difference with Amplitude is how quickly you get a visual. With other tools, you spend a lot of time setting up the query before you actually see it. With Amplitude, the minute you add a single event, you get a visualization. It makes it more friendly. You’re more willing to explore. It’s just so easy to throw an event out there and then, the minute you see something, you say, “Wow. What else can I learn?”

Crunchyroll offers community-focused subscription-video-on-demand (SVOD) and advertising video on demand (AVOD) through three of its platforms, Crunchyroll, VRV, and Anime Digital Network (in partnership with Citel, a subsidiary of Média-Participations).