By partnering with Amplitude and Braze, the Postmates team was able to build an effective stickiness strategy with a unique external trigger.

Postmates is the largest, most reliable on-demand delivery and pickup platform. Able to deliver anything from anywhere, Postmates is the food delivery, grocery delivery, whatever-you-can-think-of delivery service to bring what customers crave right to their door.

Postmates’ product north stars are centered around making local inventory easily accessible to everyone. One way the Growth Marketing team supports these metrics is by making Postmates more sticky.

The team has to figure out how to develop the right kind of triggers to help users repeatedly see the value of their platform, while also maintaining an impeccable customer experience.

According to data from Braze, users who receive messages from brands using a single channel (either email, push, or in-app messages only) saw average engagement levels that were 179% higher than users who received no messages at all. That means an email, push, or in-app message could be the difference between a lapsing user and an actively engaged customer.

Knowing this, Postmates sought a versatile engagement platform that could help them increase customer stickiness, build loyalty, and increase LTV through omni-channel messaging. And, just as importantly, they needed a way to measure how their customers were behaving in response to those messaging campaigns.

“You can make small incremental changes in messaging but the more transformative result comes from better understanding your customer experience, and augmenting your product and marketing to work together, as opposed to doing both of those independently. With Braze and Amplitude, we were able to bring marketing and product a lot closer together.”
Andrew Touchstone, Director of Growth Marketing at Postmates

Tying together marketing- and product-based experiments with Braze and Amplitude

Product and marketing partnered worked hand-in-hand to drive customers engagement, starting when they partnered with The Bachelorette on ABC. They launched a campaign where Postmates used Braze to deliver different types of “Bachelorette experiences” to their customers. 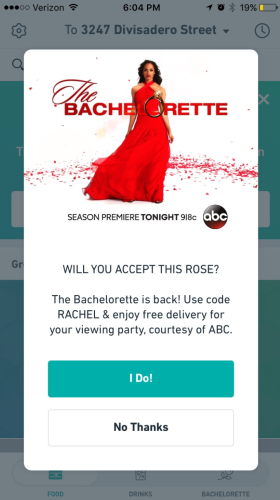 During the campaign, Postmates offered viewers of The Bachelorette free delivery for one night only. They launched the promotion via their app, emails, and social media posts such as:

“Before the drama unfolds, open the Postmates app at 5 PM and look for your code. Then order in an epic viewing party and enjoy free delivery.”

“Then, share your order with us on social with #TheBachelorette and @Postmates for a chance to win 1 year of free Postmates! (Rules).”

The Postmates team used Amplitude to analyze resulting customer behavior, and Braze to make real-time campaign optimizations on the fly. Touchstone, Director of Growth at Postmates, described the Bachelorette campaign as a “product-based experiment to a marketing experiment.”

“We were testing how this messaging and this new product experience worked together,” he said. “In Amplitude, we could view which experiment a customer was in, which marketing message they received, and how that changed their behavior downstream.”

Monitoring their campaign in real-time helped Postmates use their marketing budget for this campaign far more effectively. Their behavioral insights from Amplitude helped them answer where in the campaign they needed more communication and which variants were resulting in the highest conversions. Braze then allowed them to iterate on their messaging in real-time, driving more effective customer engagement.

“We were able to improve marketing spend efficiency by 3x, as measured through A/B tests and LTV improvements.” Andrew Touchstone, Director of Growth Marketing at Postmates

Postmates needed to figure out how to develop the right triggers to help users repeatedly see the value of their platform.

By using Amplitude and Braze, Postmates was able to create meaningful, engaging experiences that keep customers coming back.

Democratize access to product data and metrics with easy-to-use and collaborative analytics.

Utilize behavioral reporting to see how users interact with your product.

Get instant, meaningful insights into what is and isn't working with a real-time platform.

Improve critical metrics like conversion and retention to drive revenue and impact for your company.

FREE version of Amplitude. Upgrade with our plans as you grow.