MINDBODY is the wellness industry’s leading digital platform on a mission to connect the world to wellness. The platform supports consumers and companies alike. Worldwide companies in fitness, beauty, and wellness use MINDBODY’s integrated software for booking management and scheduling. Consumers can use the MINDBODY app to discover and book classes and appointments available locally.

“With Amplitude, I can better understand what people like about our app in real-time. This data supports me being able to come up with business cases quickly in order to change things or add new features in the app.”
Natalie Efstathiou, Product Manager

As MINDBODY caters to multiple user personas, they need to offer a wide range of in-app features that are able to cater to a diversity of demands. Before Amplitude, MINDBODY’s analysts spent 60% of their time answering questions for other teams. Behavioral questions were difficult to piece together across different data sets.

“With Amplitude, I am able to understand important user feedback in real-time,” said Natalie Efstathiou, MINDBODY Product Manager. “Our data science team has a constant stream of new requests coming in and there isn’t always enough time in the day to answer every data question. Streamlining our process with Amplitude allows me to back up new ideas with supporting evidence and prioritize feature updates based on recent user data.”

To track user segments and complex funnels, MINDBODY brought on Amplitude. Product analytics put the entire MINDBODY team—not just the analysts—in a better position to pinpoint which user behaviors led to fitness class bookings, one of their key revenue streams. By leveraging product data, MINDBODY took steps to cater to multiple user segments, double down on high-impact features, and redesign their app’s UX—resulting in a 24% increase in conversion.

MINDBODY offers a number of different functions to consumers: finding classes, booking classes, tracking fitness goals. Users can connect through their mobile app or on desktop.

MINDBODY was curious whether key user segments wanted to be able to track personal fitness through their app. To understand their different key user segments, the company used Amplitude’s Engagement Matrix and Personas feature. Then, they rolled out a new feature, an “Activity Dashboard” and launched an analysis to track the behavior of their target users. 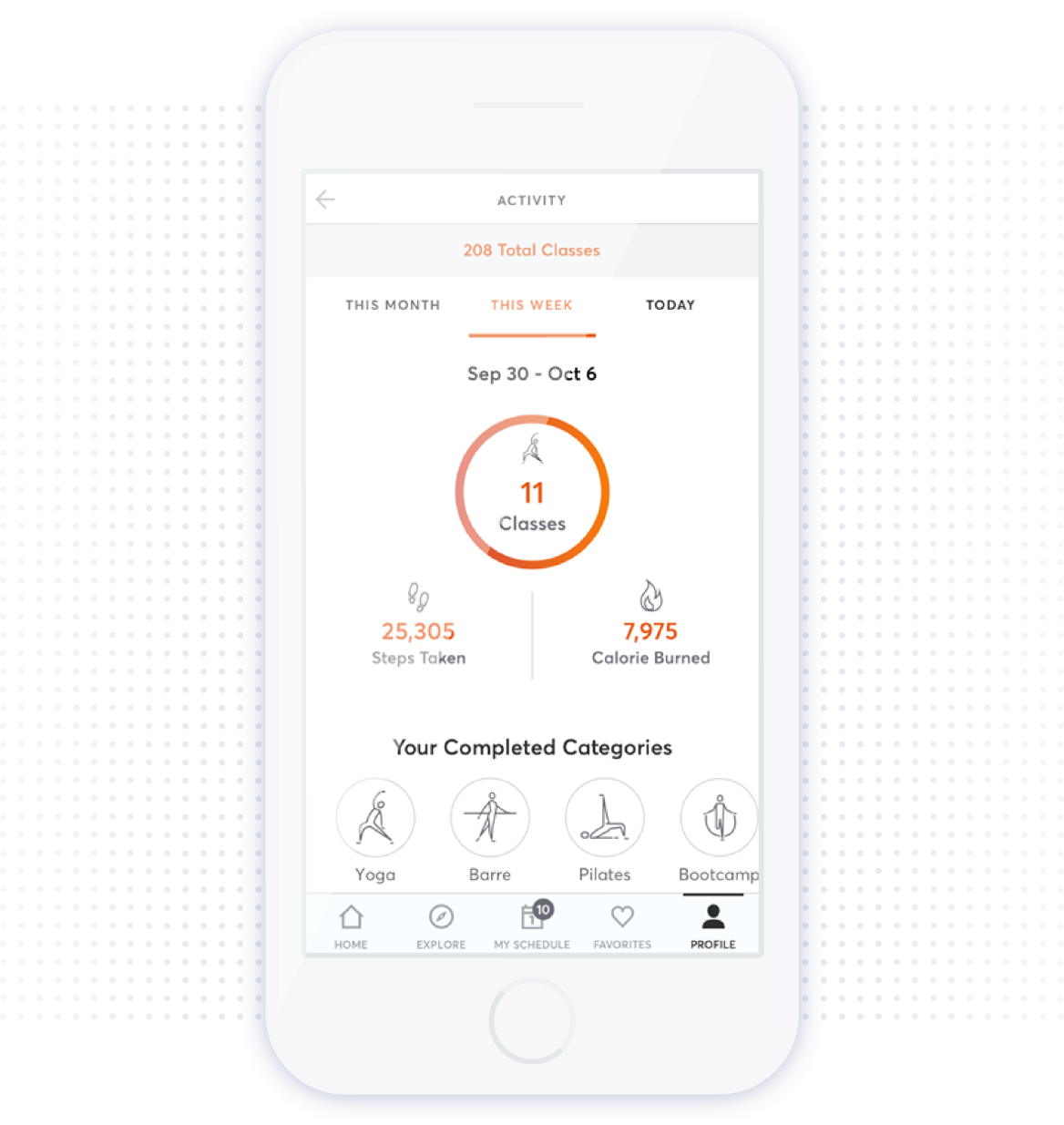 To run their analysis, the team created multiple cohorts. They triaged users based on behavior: those who engaged with their new feature and those who did not. Then, they compared user conversion paths using Amplitude’s Funnel chart. 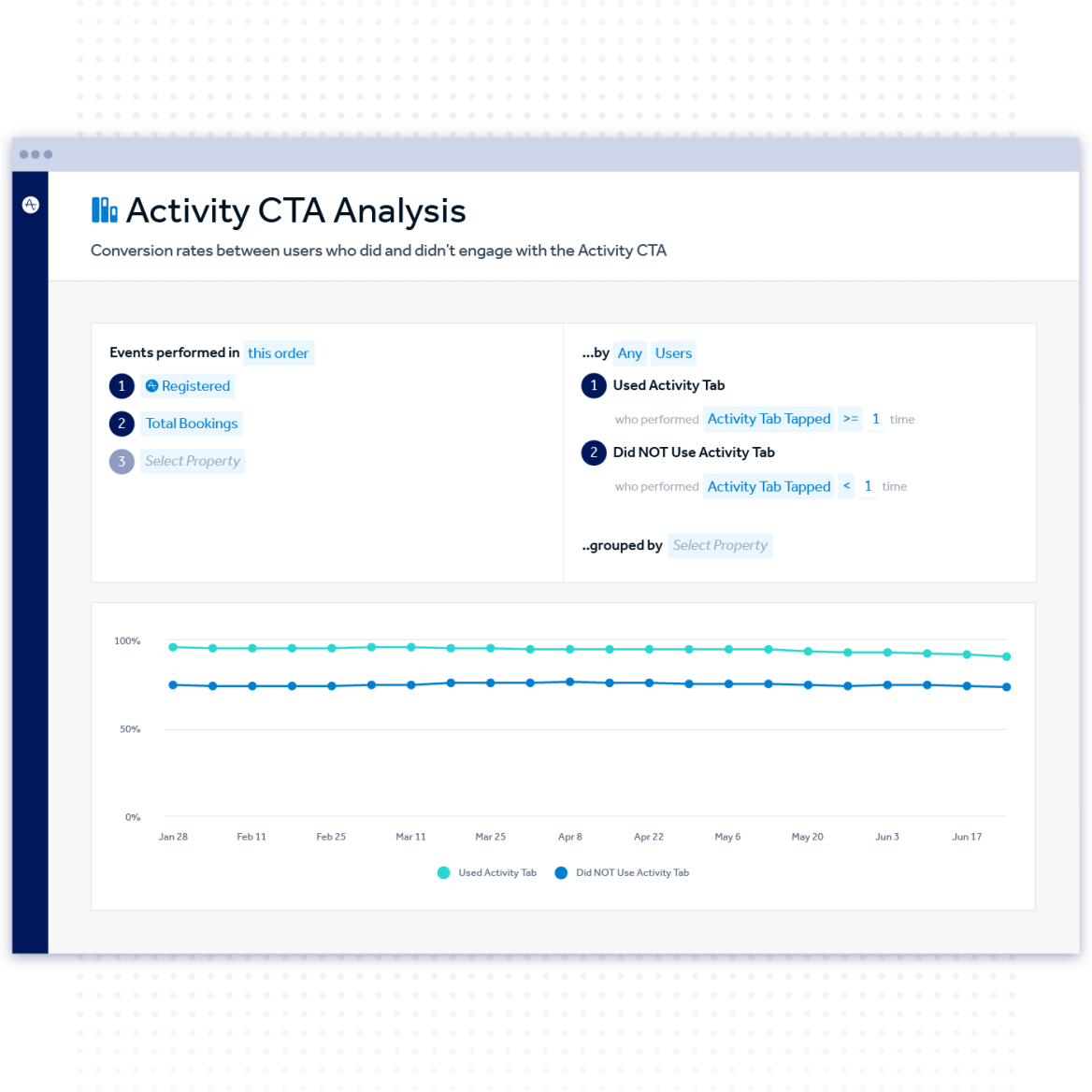 MINDBODY found that engaging with the Activity Dashboard resulted in a 24% increase in conversion to classes booked per week.

To make their Activity Dashboard more discoverable to users, MINDBODY added the feature to their in-app nav bar. 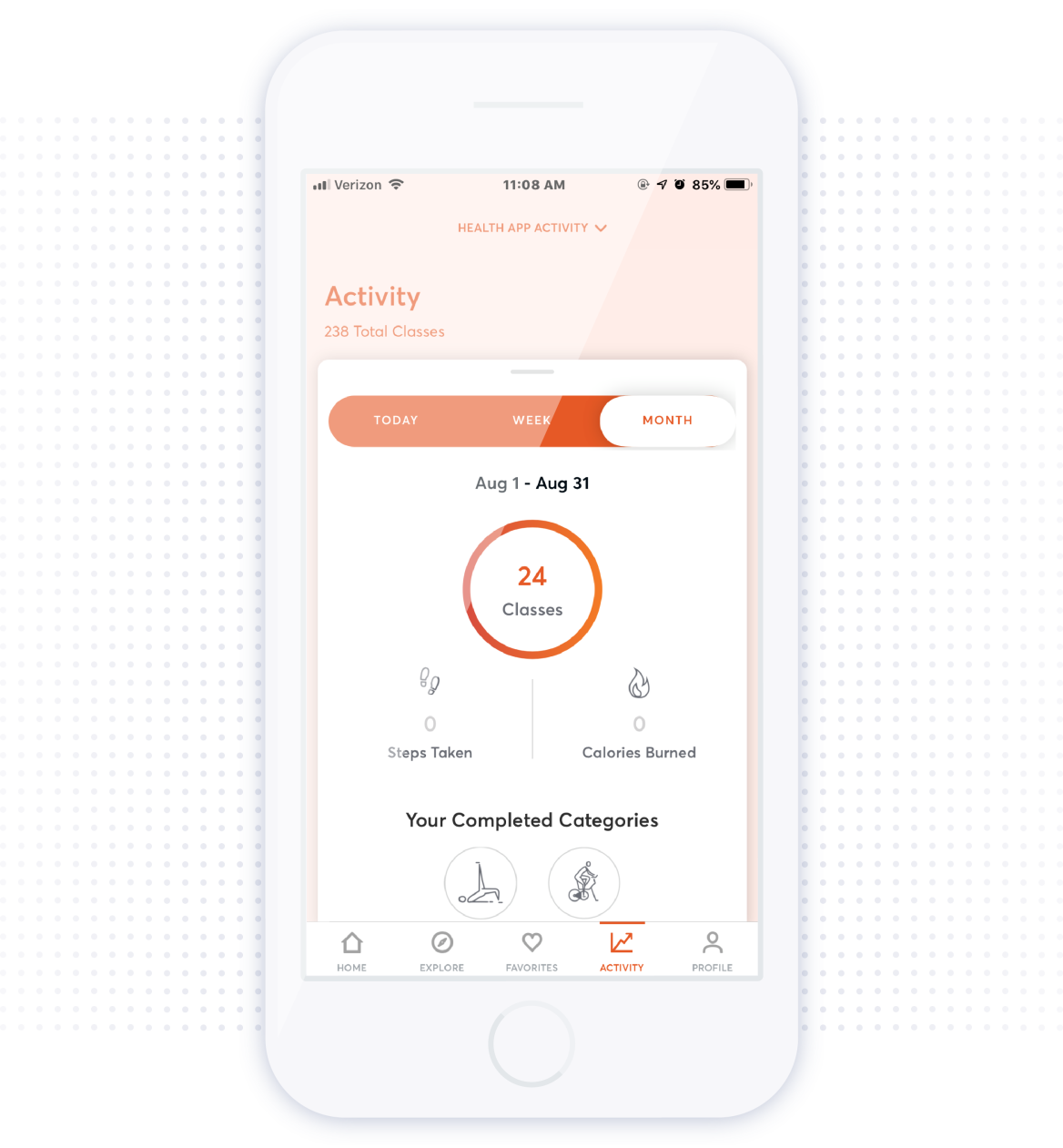 Moving forward, the team plans to build on their success by further gamifying the Activity Dashboard.

Dynamically prioritizing their roadmap based on results

In an effort to make their app more personal, MINDBODY released an integration to allow users to connect their smart devices to their MINDBODY app.

They used Amplitude Cohorts, Segmentation and Funnel analyses to understand the impact of their change. Their analysis revealed that users with a connected device remarkably more engaged and made 35% more bookings than users without a connected device. 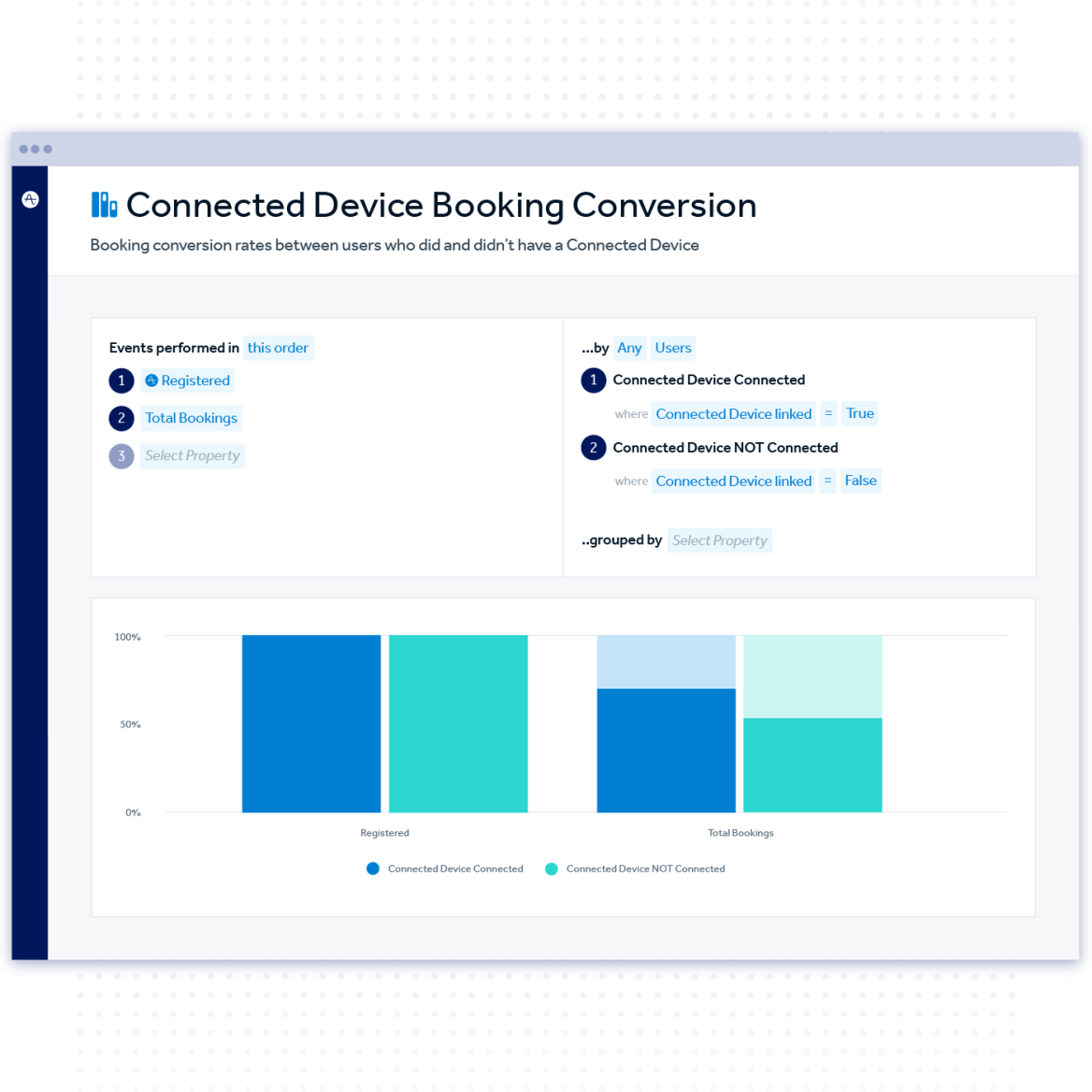 This data helped the team prioritize building integrations with the other two most popular device apps—Google Fit and Apple Health—to give a contextual experience to even more of their users.

“We already had plans to integrate Health app and Google Fit, but having that data to show that other connected device users were more engaged helped us prove that we should spend the time to integrate with other big players in the game,” said Efstathiou.

Learning that a new CTA outperforms by 4.5x

MINDBODY used Amplitude’s user flow analysis tool, Pathfinder, to understand the most common paths users took to get from their app’s home screen to their conversion event: booking a class.

The product team was excited to see that their newly-released “Book It Again” feature, which allows users to easily re-book a favorite past class, was one of the most successful paths to booking a class. Amplitude’s Funnel chart revealed that “Book It Again” had a 4.5x higher conversion rate compared to other entry points for new classes, another option on the home screen.

In contrast to the positive insights about the Activity Dashboard and “Book It Again”, Amplitude’s Engagement Matrix also showed that few people were using MINDBODY’s Explore page, let alone the filter feature on the page.

Their learnings cumulatively inspired the MINDBODY team to tackle a navigation and homepage overhaul:

The MINDBODY team’s goal is to make their most valuable features easy to discover and use, and ultimately to drive their key KPIs: conversion and retention. 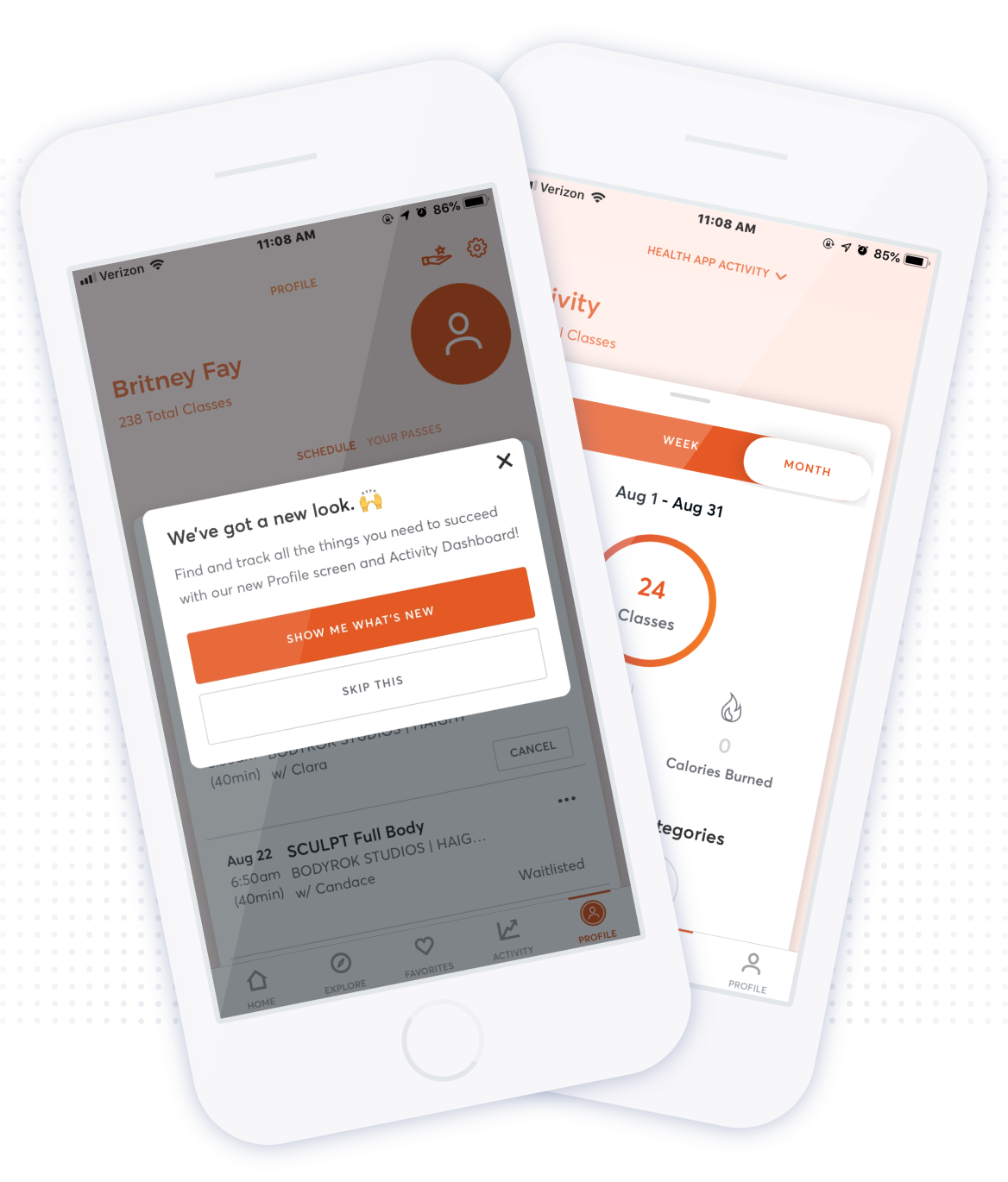 Saving time for both PMs and Data Scientists

Josh Curry and Ryan Kaltenbach from MINDBODY’s product data science team estimate that before Amplitude, 60-90% of their time was dedicated to answering questions from PMs, Designers, and other business teams. Now that 60% of the company can answer their own questions in Amplitude, data scientists only spend 5 - 25% of their time responding to those kinds of questions. Which means they get ~60% of their days back to invest in other initiatives.

Efstathiou confirms, “Amplitude saves me time because rather than asking our data science team for small, quick queries, I can find things like my user composition on my own such as, how many people are using an iPhone X? Should we optimize for that?”

She adds, “Efstathiou adds, “That data lets me make confident decisions on how we should proceed with product changes.”

MINDBODY is the leading technology platform for the wellness industry. Local entrepreneurs worldwide use MINDBODY’s integrated software and payments platform to run, market and grow their businesses. Consumers use MINDBODY to more easily find, engage and transact with fitness, wellness and beauty providers in their local communities. For more information on how MINDBODY is helping people lead healthier, happier lives by connecting the world to fitness, beauty and wellness, visit mindbodyonline.com