Of employees use Amplitude

Dave is on a mission to build an all-inclusive financial ecosystem that strives to help the 4 in 5 Americans who live paycheck-to-paycheck thrive. Their core products helps with budgeting, building credit, finding work, and accessing money to cover immediate expenses.

“We chose Amplitude for our behavioral analytics platform to help the company make more data-driven decisions. It was super easy to implement, and we had it up and running within my first month of joining the team. Very quickly it became a part of the product development conversation.”
Ryan Prust, Senior PM

When Senior PM Ryan Prust joined the team, one of his responsibilities was to help the team grow past the early stages of product strategy driven by intuition, and build a mature, data-driven product development process. “We chose Amplitude for our behavioral analytics platform to help the company make more data-driven decisions,” Ryan said. “It was super easy to implement, and we had it up and running within my first month of joining the team. Very quickly it became a part of the product development conversation.”

Through regularly closing the “build-measure-learn” loop, Ryan’s team found their key retention drivers and established strong product-market fit. They are now using Amplitude to identify new opportunities for growth (they’ve 2x’d their MAUs since partnering with Amplitude!) as they expand their product offerings.

In order to solidify their product-market fit, the Dave team explored different retention loops to enhance their target users’ experience. In their North Star Metric workshop run by Amplitude’s Success Manager, Dave Sachs, the Dave team discovered that retention was higher for users who added more recurring expenses to their account.

“Without Amplitude, I think we would need twice as many analysts to answer all of the questions that people are answering self serve right now.”
Ryan Prust, Senior PM

With this learning, they reworked their onboarding flow to significantly increase the average number of expenses added. And that has driven even higher retention and increased revenue: users who add expenses during onboarding are 5.7x more likely to still be using Dave 3 months later. 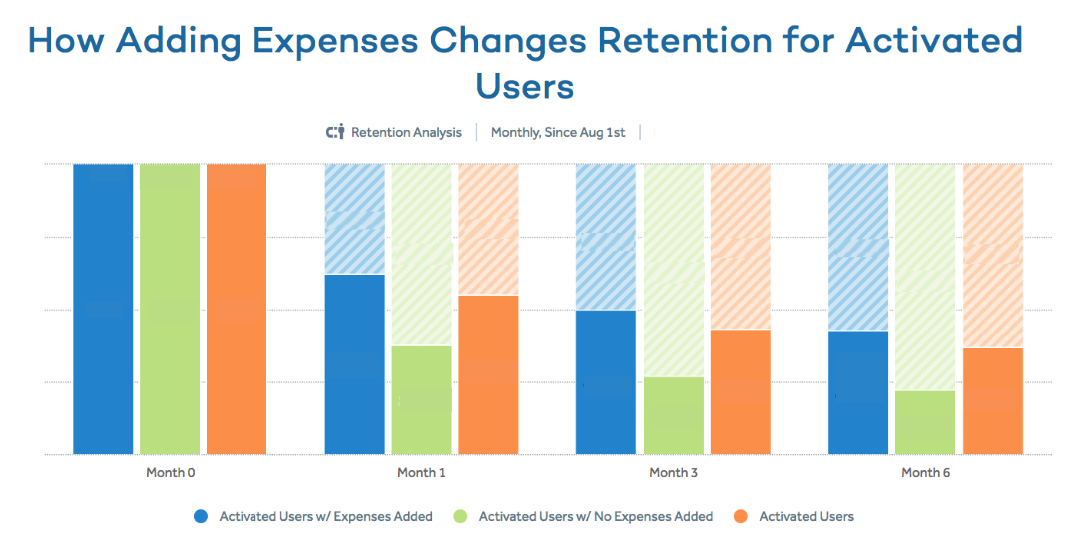 They also created an Amplitude cohort to track “successful members” who take certain key actions in the product. Growing that cohort is now part of their quarterly objectives, and they are further using this data to drive marketing decisions by targeting users who are similar to those in the successful member cohort.

They continue to use Amplitude’s North Star Framework to ensure that all of the teams at Dave are working together to create a product their users love and want to use again and again.

As Dave looked to expand on their core budgeting and paycheck advance product, they needed to figure out other creative ways to drive more engagement from their users and provide more value. The Dave team hypothesized that now that they had users saving more money, they could try to help them earn more money. Their new product, “Side Hustle,” connects Dave’s users with flexible jobs.

One of the reasons they chose Amplitude was for our unique Microscope feature, which can create a cohort of users at any specific point of a funnel, and Amplitude Engage, to then engage that cohort through push, email or SMS. They put it to use in a big way as they built this new feature and revenue stream, using Amplitude Engage with Braze to define and target key user segments.

The Dave product team used behavioral segmentation with Amplitude’s cohorts to identify users who would be interested in trying this new product. Using Amplitude Engage with Braze, they were able to seamlessly engage this behavioral segment of users, and are now running 10-15 targeted messaging campaigns simultaneously.

Before they had Amplitude Engage, they weren’t passing information at all between their analytics and messaging platforms. They estimate that without Amplitude Engage, it would have taken a data analyst at least a week to do the segmentation that a PM now does in “5 seconds” with Amplitude. With this huge reduction in effort, Dave can invest analysts’ resources elsewhere.

Since launching, they have driven an average of 8% MoM growth!

They used Amplitude’s precision tracking, property segmentation, and funnel analysis to track which Side Hustle job opportunities get the best response—and it wasn’t what they expected. Counter to their instincts, their data revealed that what they assumed would be a less popular option amongst their users was chosen 3 times as often.

They’ve improved the product to reflect that and drive even more referrals.

This is just one powerful example of how Amplitude has helped them move from building based on intuition, to making data-driven decisions about product strategy.

“The first way that we started to use Amplitude was to prove whether or not our hunches were true,” says Prust. “In product strategy conversations, it would often start with somebody having a hunch. Then we’d go to Amplitude and spin up some charts, and identify: that hunch is true, or that hunch isn’t even close. That was really powerful. We were able to pretty quickly see times where we would’ve acted on hunches that would’ve been completely wrong.”

“The first way that we started to use Amplitude was to prove whether or not our hunches were true. In product strategy conversations, it would often start with somebody having a hunch. Then we’d go to Amplitude and spin up some charts, and identify: that hunch is true, or that hunch isn’t even close. That was really powerful. We were able to pretty quickly see times where we would’ve acted on hunches that would’ve been completely wrong.”
Ryan Prust, Senior PM

Dave added a checking account offering to further expand the financial ecosystem that they’re building. This service, which launched in June, was built using Amplitude to power iteration throughout development.

The first step was to verify that people actually were interested in a Dave checking account through qualitative and quantitative analysis.

According to Prust, “We knew from past data that our most valuable members—who we suspected would be most interested in the checking account—are the people that successfully avoid overdraft penalties by taking an advance.”

To validate this big bet, Ryan and his team showed these most successful members a new experience aimed at investigating their interest in a checking account. They saw that over 50% of these users exposed were excited about this new opportunity.

Once they had confirmed high demand, they used data again to determine the key features of the new product. They hypothesized different value propositions for the checking account, like an increased maximum paycheck advance, no overdraft, and faster and more reliable advances.

To understand which were most appealing, they tested a variety of possible value propositions to see which resonated best with their target personas.

The data gave them a definitive answer that one option was preferred up to 2.5x to the others. They then chose their beta testers with Amplitude as well, creating a cohort called “possible bank testers” with a set of criteria that they expect will predict success with the new feature.

In the coming months, as they roll it out to all their current members, they anticipate doing further life-cycle growth marketing based on Amplitude funnels to drive more users to this new checking account product.