Le Monde is a French news publisher delivering news to its readership in print since 1944, online since 1996, and via mobile app since 2008. Their digital channels operate based on a monthly subscription business model where some of their content is available to read for free, while the rest is gated and only available to subscribers.

Over the last decade, Le Monde’s online business has become increasingly driven by online subscriptions leading the company to focus on understanding its readership in order to retain its current subscribers as well as drive new subscriptions. As a result, Le Monde chose Amplitude as one of their main analytics platforms to help them track and understand how users behave on their website and throughout the subscription flow—an essential part of growing their online business.

For the past few years, Le Monde has specifically focused on driving reader revenue on their digital channels. The publisher has a premium paywall, where subscribers pay €9.90 ($8.80) a month for the first year of digital access to Le Monde’s best content. Led by their Subscriptions Director, Lou Grasser, and their Head of Audience Engagement, Kevin Singer, the Le Monde team put a great deal of effort into figuring out how much content they should give away for free and how much to hold back as an incentive to subscribe. They used Amplitude’s Funnel Analysis, Compare Behaviors, and Engagement Matrix, to understand readers’ behavior and help them determine where they could optimize their website to deliver better conversion to subscription. These learnings informed a website redesign at the end of 2018.

On the new site they changed a few key things. Previously, subscribers were taken to a separate tab with content specifically for paid users. With the redesign, Le Monde unified the landing page experience for both readers and subscribers. With Amplitude’s Event Segmentation, they identified the paid content users engaged with the most and displayed it on the homepage to help entice readers to subscribe. All readers now see the same homepage, and yellow flags signify content that requires a subscription. The new site design increased subscriber conversions by 46 percent and helped Le Monde grow digital subscriptions by over 20 percent. 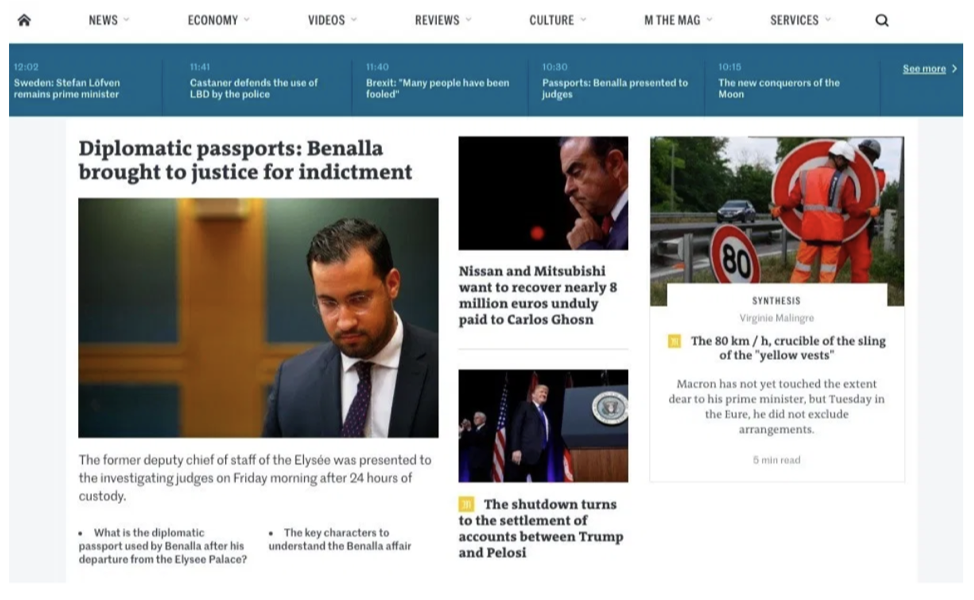 As Le Monde rolled out the redesigned website in 2018, Amplitude played an important role in helping them gauge the performance and ensure that they were hitting their key performance indicators (KPIs). “In the beginning, we only put 1% of our online traffic to the new site,” explains Lou Grasser. They then monitored their KPIs in Amplitude to understand the impact on subscriptions, reading rate for articles, advertising revenue, and audience growth. If everything tracked well, they increased to 2% of their traffic to the new site, then 5%, and so on.

“Amplitude helped us understand if the performance of the new website was better than the previous version and ultimately helped us confidently transition to the new website”
Kevin Singer, Head of Audience Engagement

As often happens with the launch of a new site, Le Monde ran into a few unexpected bugs and performance issues. At one point, the team saw in Amplitude’s Event Segmentation, that many users were subscribing multiple times or trying to access individual articles numerous times without success. They did a deep dive on these data points with Microscope and saw that almost 30% of web paid subscribers were not able to properly access the gated content just after their subscription, both on the previous and the new website. “With Amplitude, we found that there were several bugs leading to this access problem,” explained Lou Grasser. “It took us a while, but we solved almost everything, and we now have about 97% success in registering and in access on the web. This is what is most important to us—that our subscribers get the content that they pay for.” Finding and fixing this bug early on reduced a huge amount of burden on their customer support team as well.

With the new site in place, Lou Grasser, Kevin Singer and their teams are now focused on making sure that their readers continually come back and that their most valuable subscribers see real value in their experience. “Even more than subscription, Amplitude is helping us on retention,” Lou Grasser explains. “It’s the only tool we have that tells us, for instance, the retention of people who subscribed from specific articles, or specific types of articles.” With Amplitude’s in-depth Retention Analysis, they can better understand if readers subscribe for specific topics, certain types of content, or a particular style of writing. Over time, they’re also getting a better understanding of what makes subscribers more likely to renew year after year.

An improved way of working at Le Monde

“Amplitude has really changed the way we work internally. We used to work with data in silos and now, thanks to Amplitude, we have created a big team where we are all using Amplitude together on a daily basis”
Lou Grasser, Subscriptions Director

Where previously only a few people in the organization could really answer data questions, now almost 30 people have access to the data in Amplitude. According to Lou Grasser, “we used to ask for new data and it could take some time to get it. And nowadays you ask for data and it’s two minutes. It’s really two minutes. So we can be super agile with it.”

Le Monde is a French news publisher delivering news to its readership in print since 1944, online since 1996, and via mobile app since 2008.