Why You Need A Retention Playbook

Today, there are more than 4 million apps available for download across both Android and iOS devices.

_This article is an excerpt from the first volume of The Product Analytics Playbook: Mastering Retention.

Retention is the one metric that matters for sustainable growth. The Playbook is a comprehensive guide to understanding user retention that provides a novel framework for analyzing retention at every stage of the user journey._

When it comes to growth, retention is king.

Without good retention, your app’s like a leaky bucket—you can pour in as many users as you like and wind up with nothing.

A mobile app with good acquisition but bad retention may grow quickly at first, but it will hit a plateau. Then it’s just a matter of time before you’ve churned through all the people in your market—and the slow, painful decline begins.

It’s excruciating to watch happen, and because building a successful app has never been harder, it’s become an all too common result.

Retention is not sexy the way marketing, advertising, and other means of user acquisition are sexy, but even the most clever growth hack will ultimately leave you high and dry if your product can’t retain its users. You’re competing to chart in the App Store and grab the attention of your potential users—and the competition’s never been tougher.

The State Of The App Union

The unsexy work of building retention has become all the more important in the last few years. With App Stores saturated with product, users are quick to try apps—but highly unlikely to keep them around for long.

Today, there are more than 4 million apps available for download across both Android and iOS devices. Count how many you have on your phone, count how many you use on a regular basis, come up with a ballpark figure for how many you’ve downloaded in your life, and you’ll get a sense of the challenge ahead.

App stores are live-fast-die-hard economies saturated with apps no one uses. According to a 2015 study by the Application Resource Center from Applause, more than 90% of apps in the English-speaking iOS/Android app stores qualify as “zombie apps.” These are apps that you cannot organically discover in any list, any category, or any genre because they don’t have enough users.

Zombie apps make up about 75-90% of every app vertical. That means the vast majority of apps out there can only be found by searching for their actual titles. 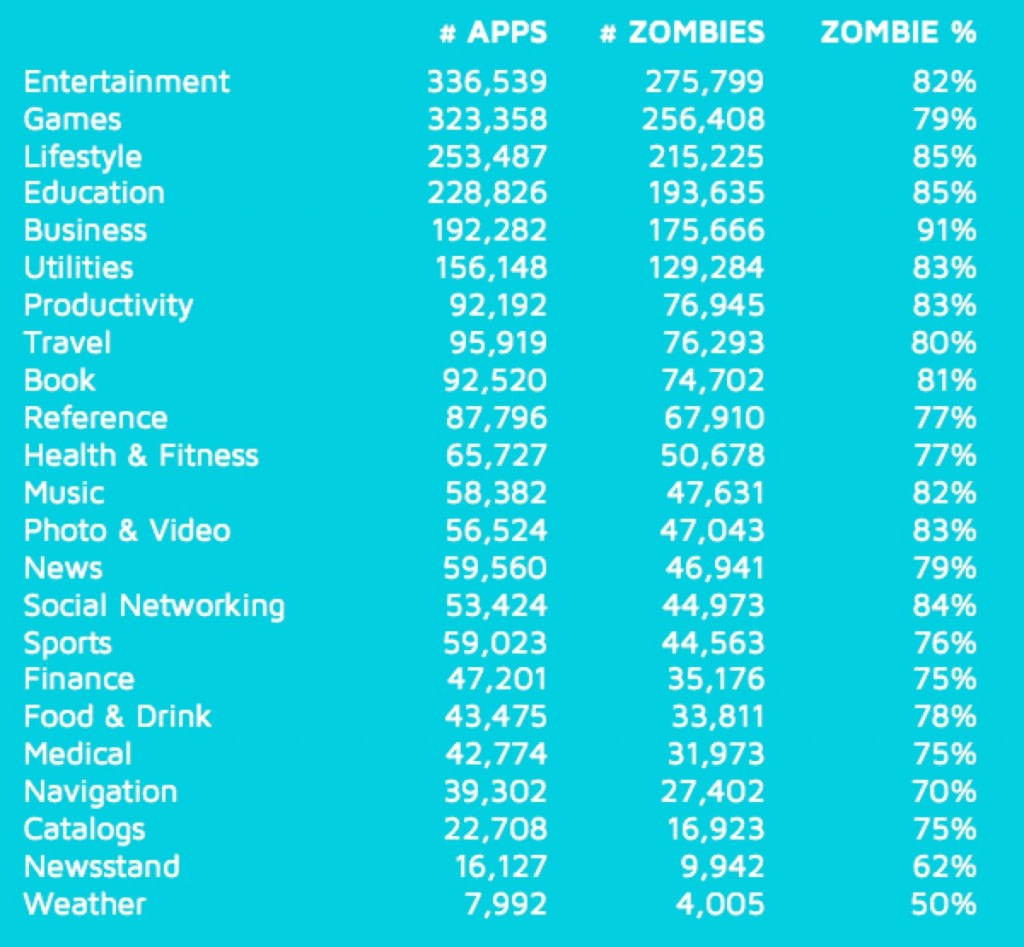 And the rate of app zombification isn’t slowing. Just three years ago, almost half of all the apps in the App Store appeared on a list that you could browse. That figure recently dropped to 9%.

To avoid meeting the same fate as one of these zombified apps, you can’t just focus on your top-of-funnel. In fact, doing so is just counterproductive.

You might be able to pay and get yourself five minutes of fame on one of the top charts temporarily, but users don’t tell their friends about an app they stopped using after a couple days. They don’t make in-app purchases. They don’t subscribe.

The long-term growth of your app and the health of any business you want to build on top of it are based almost entirely on how well you keep your users coming back. That’s how apps demonstrate they have real value.

In a study of 75 million Android phones, Quettra looked at the retention rates of 22 well-known social apps. If you needed one picture to express the difficulty of user retention, it would be this one: 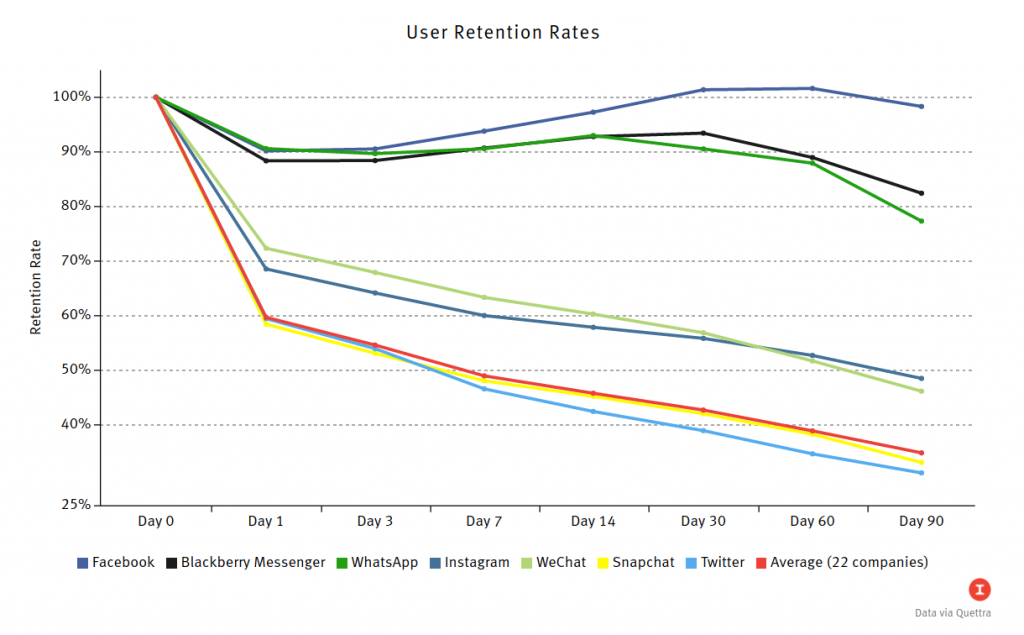 You might’ve heard the stat that mobile users spend almost all of their time in just five different apps. What we see here is that even if a user _just _has five apps on their phone, they’re likely to spend significantly different amounts of time in each one. Facebook and Whatsapp retain users incredibly well, but they’re in a league all their own. Below them you can see that some of the hottest social apps on the market—Twitter, Snapchat, Instagram—all lose half of their users at minimum over the course of three months. And those numbers are actually great. The average app loses way more than half its users after just one day: 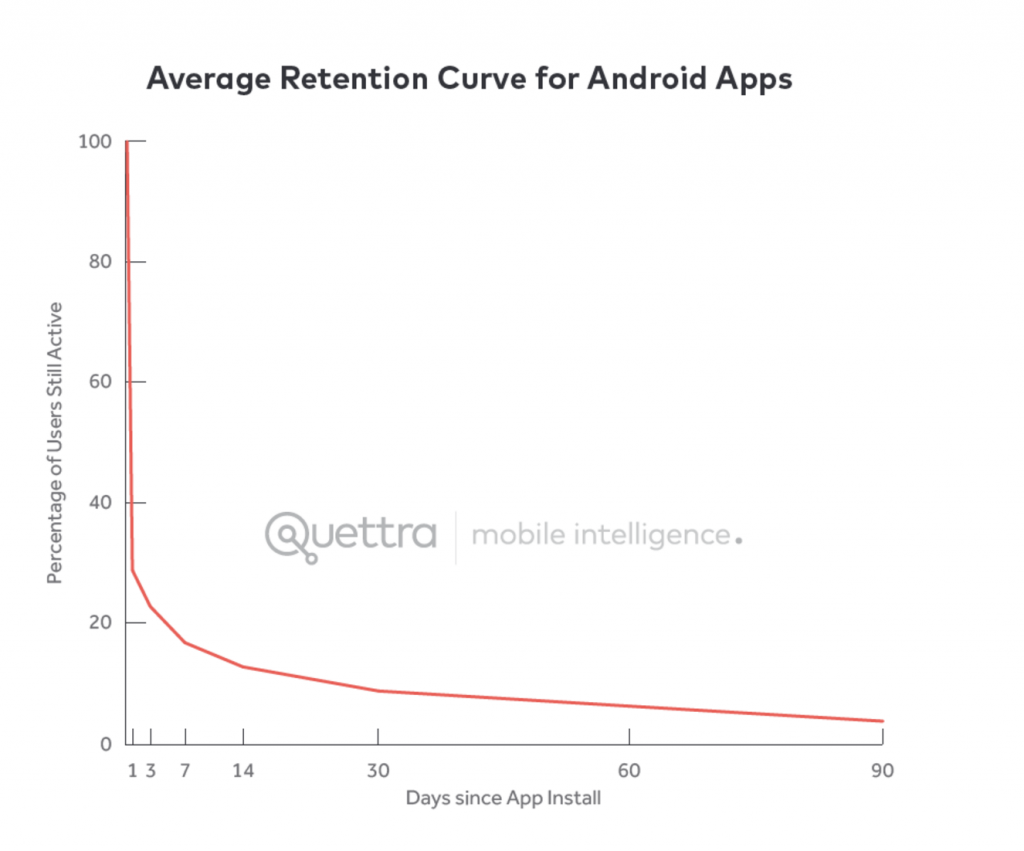 A week after install, most apps lose more than 80% of their users. Ranked apps perform much better than the average, of course: 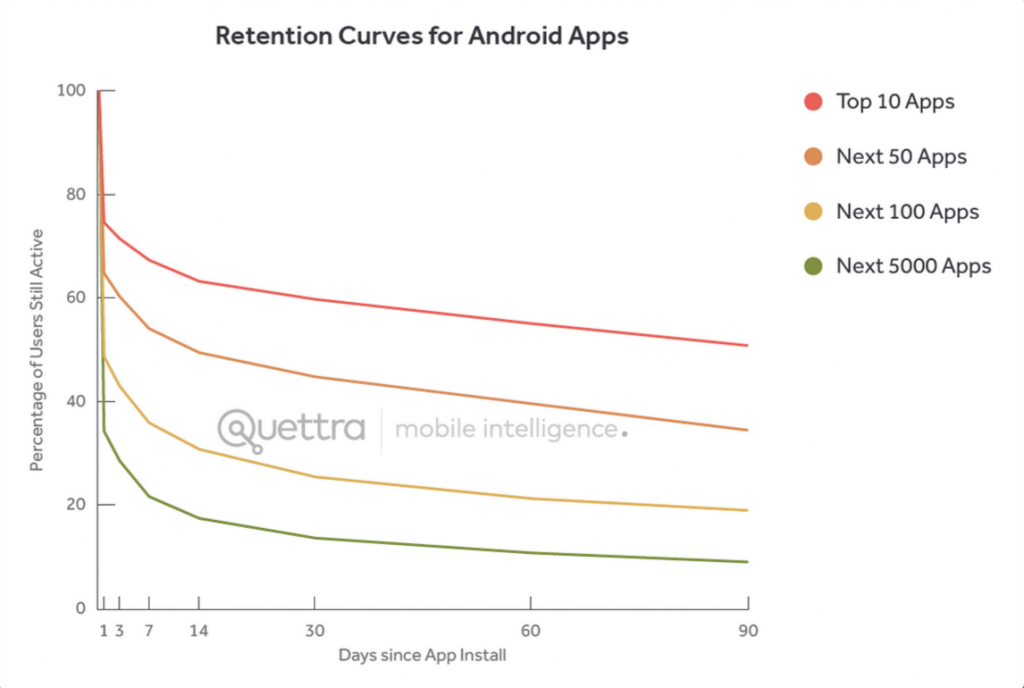 This is a sobering portrait of the reality of app usage, but it also demonstrates the way forward. Lay all of these datasets on top of one another, and there’s one massive trend that pops out at you:

It’s no mystery when your users are deciding either to continue using your app or ditch it—it’s the first day.

After someone downloads your app, the clock starts ticking. Every interaction they have with your app moves them closer to Keep—or Ditch—and after 24 hours, their decision is essentially final.

It’s not necessarily “smooth sailing” after that, but virtually every app loses users at the same rate after about a month—making it all the more crucial to focus on making a great first impression.

Using behavioral cohort analysis and other mobile analytics techniques make it possible to bend that retention curve up and start generating real growth. From understanding your app’s Aha! moments to identifying and learning from your power users to testing out different triggers and rewards, this Playbook will teach you everything you need to know about building a stronger, stickier product that can be the foundation for a great business.