Your Mobile Users Are Just Not That Into You

This is part of our “How to Court Your Mobile Users” series with Prolific Interactive and Branch Metrics. The best relationships are always a work in progress–whether that’s with your significant other or with your mobile app’s users. But some dates and relationships just don’t work out no matter how much effort you invest in them. What do you do when your mobile users are just not that into you? Sometimes, the only thing you really can do is accept that it’s you, not them. Do the best you can to learn from your mistakes and move on. Two strategies that you can put in place to learn the most from your churned users are:

“Success consists of going from failure to failure without a loss of enthusiasm.” - Winston Churchill

Get cozy with your data

After a painful breakup, you may find yourself wondering when, exactly, things started to go wrong. You might brood over all the things you ever said, all the things you should or shouldn’t have done. In an actual relationship, introspection like this may not always give you clarity into the situation–but if you’re looking to understand your relationship with your mobile users, analytics helps you do just that.

Analytics can help you understand exactly what differentiates mobile users who churn from the ones that stick around. “Maybe churned users are running into a confusing UX problem, while retained users are following a path in your app that you didn’t expect,” says Wendy Vang, Success Manager at Amplitude. Using analytics to track a user’s journey through your app, from download to conversion or drop-off provides an opportunity to explore how the experience can be altered in favor of better conversion and retention. After making the appropriate UX changes based on your analyses, you can run tests to see if those numbers (and your overall relationship with your users) change. Here’s an example. Wendy worked closely with a team building a mobile news app. They thought their “secret to retention” was to get users to follow as many news categories as possible, so they designed their onboarding process to force new users to follow at least three categories. But, when the team analyzed their app data, they realized that the users who retained were actually the ones who dove deeply into only one category; the number of categories these users were following didn’t make a difference. The team then changed their onboarding process to encourage new users to follow one category and additional subcategories within it. They saw a 40% increase in retention as a result. Not being attentive to what your mobile users are telling you through the data that you collect is one of the biggest dating mistakes you can make during the courtship phase. “Your data is telling you what your users want,” says Wendy. Not paying heed to those messages will weaken and eventually destroy your relationship with your users. 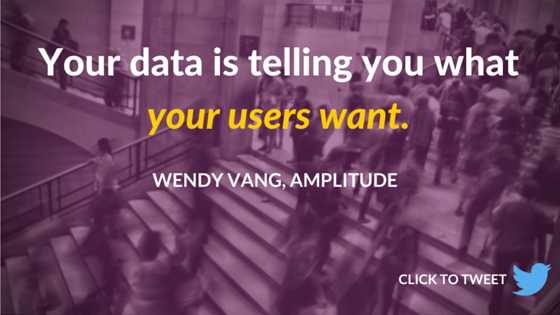 Pay attention to your users

Let’s be real. In the dating world, not very many people manage to stay friends with their exes. Sometimes, you just don’t get a chance to rationally discuss why your relationship ended up the way it did. One big reason relationships–both with significant others and with your mobile users–may not work out is because someone is just not being attentive. As the developer or product manager of your mobile app, you have to pay attention to what your users say they like, and then use that to make their experience as enjoyable as possible.

[Tweet “You have to pay attention to what your users say they like”] Sure, analytics is great for uncovering trends but your users probably comprise a wide and varied group, each with different challenges. Sometimes the best way to pay attention to your users is simply by asking. This might be through user research, usability testing, and through contextual inquiries within the user’s environment to uncover external influences. “All of this enables you to make smart guesses,” says Nandhita Kumar, Sr. UX Designer at Prolific Interactive.

Nandhita offered the example of Le Tote, a clothing rental service that Prolific was working with to improve their feedback flow. After talking to some of Le Tote’s customers, the team realized something. Users weren’t necessarily churning for the reasons they might’ve suspected. Some users absolutely loved a piece of clothing but it wasn’t in their size, or they wished they had the piece in another color, or they hated how it fit, but wanted to get more things like it. “It’s talking to people and understanding what fidelity of feedback they want to give you and implementing that,” says Nandhita. There comes a point however, when the amount of time spent on gathering user feedback yields diminishing returns. Sometimes you and your mobile user really, truly, just aren’t made to last, and spending the time and effort to keep them around becomes wasteful to your business. “It’s important to understand when a [certain type of user] is a bad fit and move on,” Nandhita advises. “You’re not just iterating on your product, you’re iterating on your acquisition strategy as well. Sometimes people will enter the funnel who are outside your target audience and you have to know that you can’t please all types of people while still staying true to your brand. That doesn’t make you a bad person.”

Dina Chaiffetz, Director of Product Strategy at Prolific Interactive, brought up an important point to consider when it comes to requesting app store reviews on mobile. It can feel manipulative, says Dina, to be asked if you’re enjoying your experience and, if you answer positively, to then immediately be requested to leave a review. Some of your users may recognize such tactics as self-serving and purposefully neglect to leave a review. The same can be said of prompting feedback after specific conversion points. Dina gave the example of food-delivery apps, which often prompt their users to rate a dish after it’s delivered. If a user likes a dish, they rate it highly, but this is not a real indication of how they feel about the app itself. Asking for structured feedback can mask how users feel about the app at stages between conversion points. One thing that’s clearly lacking in many mobile apps is a process for users to provide general, semi-structured feedback. Without that opportunity, users are in danger of churning.

No relationship is a wasted one. There’s always a thing or two you learn about yourself at the end of a breakup, and a thing or two you can learn about the person you were dating. With behavior analytics, you can systematically understand what the majority of your users like, why some of your users have churned, and come up with an action plan to hang on to the users who really like you. It’s important to couple quantitative analyses with paying attention to your users through qualitative feedback. You can really show how much you care by listening to their likes and dislikes–but don’t hesitate to break up with the users who just don’t fit your target audience! For more insight into how to court your mobile users, be sure to read the rest of the posts in this series: