Zachary Kinloch on the ‘analytical mindset’ needed for growth

This month I sat down with Zachary Kinloch, Head of Growth at DoorDash.

The Amplitude Datamonster of the Month series is our way of spotlighting product and growth experts who have made data a central part of their success. Through their stories, we hope to empower other industry professionals with proven analytics strategies and advice for leveraging analytics across their organizations.

_We select our Datamonsters based on the impact they have at their respective companies. This ranges from how these individuals enable their entire organization to be data-informed to how they leverage analytics to make meaningful product and marketing decisions. _

This month I sat down with our August Datamonster Zachary Kinloch, Head of Growth at DoorDash.

In the explosive industry of on-demand delivery, DoorDash remains one of the most popular restaurant delivery businesses to date. In the past year, DoorDash took steps to expand its market by partnering with brands like 7-Eleven and Dunkin’ Donuts, going international into Toronto, and even offering up alcohol delivery.

Being data-driven from the outset is one of the main reasons DoorDash is as successful as it is today.

Recently, I had the pleasure of sitting down with Zachary Kinloch who heads the growth team at DoorDash to chat about how he grew (pun intended) into his role.

Tapping into one’s analytical side

“I didn’t ever intend to become head of growth or lead a growth team,” Zach said with a laugh, when I asked him about his journey to DoorDash.

Considering the newness of the field of growth is and the fact that it’s still, well, growing, I wasn’t surprised to hear this. Our previous Datamonsters Instacart’s Fareed Mosavat, Yik Yak’s Julie Zhou, and Brian Balfour – found their way to growth in, as Zach put it, equally “circuitous” ways.

Zach graduated with a degree in Petroleum Engineering from Stanford, but then went into finance. He spent four years in the industry, first as an investment banking analyst at Morgan Stanley and then as an associate at TPG Growth, where he gained in-depth financial modeling and forecasting skills

“Doing anything quantitative helps you learn how to break down complex problems into something that’s much more bite-sized and easy to tackle.”

Both engineering and finance helped form the analytical foundation that underlies Zach’s growth expertise today but so did another, somewhat unexpected role.

“While working and meeting with a lot of companies, I felt the people who had the most insight and impact were the ones who were in operations,” explained Zach. “Every time we would evaluate a company at TPG [a private equity firm], we would bring a person with ops expertise into the deal to evaluate the opportunity.

The people in operations were the ones thinking about how to improve the company and who to hire so the company grows. “I felt like those were the people in the room that provided the most value,” said Zach. “I wanted to be in that position, where I could see how we could improve and operate a company from the ground up.”

From operations at LinkedIn to growth at DoorDash

That’s how Zach joined the growth and engagement team at LinkedIn, where he focused on product operations. “We partnered up with product managers to help them understand which product were working, which ones were not, and then help them iterate and optimize on those products,” Zach said.

Two years later, Zach looked to take his ops skillset to an earlier stage company where he could have more of an impact. In 2014, he joined DoorDash as associate general manager.

Though he wasn’t hired under the title “Head of Growth,” that, essentially, was what his role ended up being.

At the time DoorDash was in very early stages, in just two markets.
“I was actually helping DoorDash grow out its Silicon Valley operations,” said Zach. He started out thinking about growth on a “much more localized level,” hyper-focused on growing out and scaling just the company’s Silicon Valley Dashers.

As DoorDash scaled to more markets, it became clear that they needed someone who could think about growth full-time–about how the company could acquire both “Dashers” and customers cost-effectively, at a more global level.

Zach became that person. He also recruited like-minded individuals at DoorDash who had both the intrinsic interest” and strong analytical skills to join what would soon become the growth team.

A unique combination of skillsets

When I asked Zach what part of his journey most significantly impacted where he is today, he said, without hesitation: “It’s a combination of the specific domain expertise I picked up at LinkedIn, combined with some more tangible skills that I picked up in finance.”

While Zach was at LinkedIn, the company’s growth had begun to re-accelerate–very rare, for a company of that scale. During that time, he had the opportunity to learn from the very best of of LinkedIn’s growth team, citing Aatif Awan (Head of Growth at LinkedIn) and Elliot Shmukler (VP of Growth at Instacart) as “some of the best growth people in the business.”

While building DoorDash’s initial growth team, Zach looked for the same traits that made LinkedIn’s growth experts like Awan and Shmukler so successful: a methodical, super-analytical mindset. 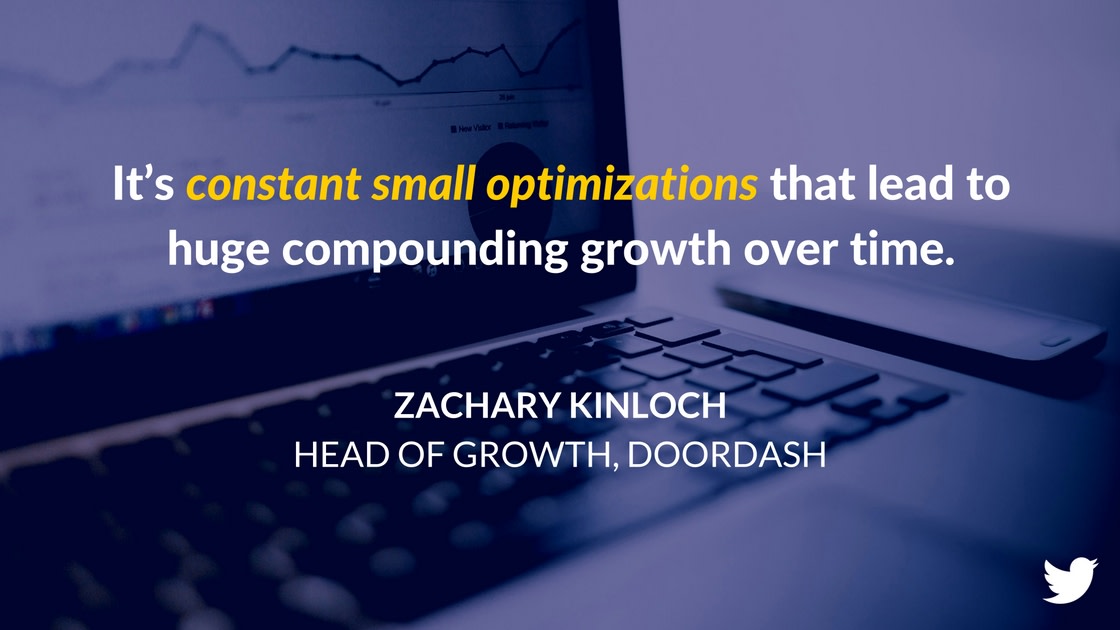 Even though Zach’s path to growth wasn’t direct, he says he wouldn’t change anything. But what about those who are interested in getting into growth in a less circuitous way? There are a few solid steps Zach says anyone interested in growth should take:

I asked Zach to describe his job in one word.

“I would say persistence or relentless,” he says, after taking a moment to think about it.

But it isn’t as grim as it sounds. “The fun part about growth is that you have a hypothesis, you test it, and you keep on iterating over and over and over again. You move very quickly, collect data, and then inform your next decision. The cycle times are much faster than any other group at the company,” says Zach. 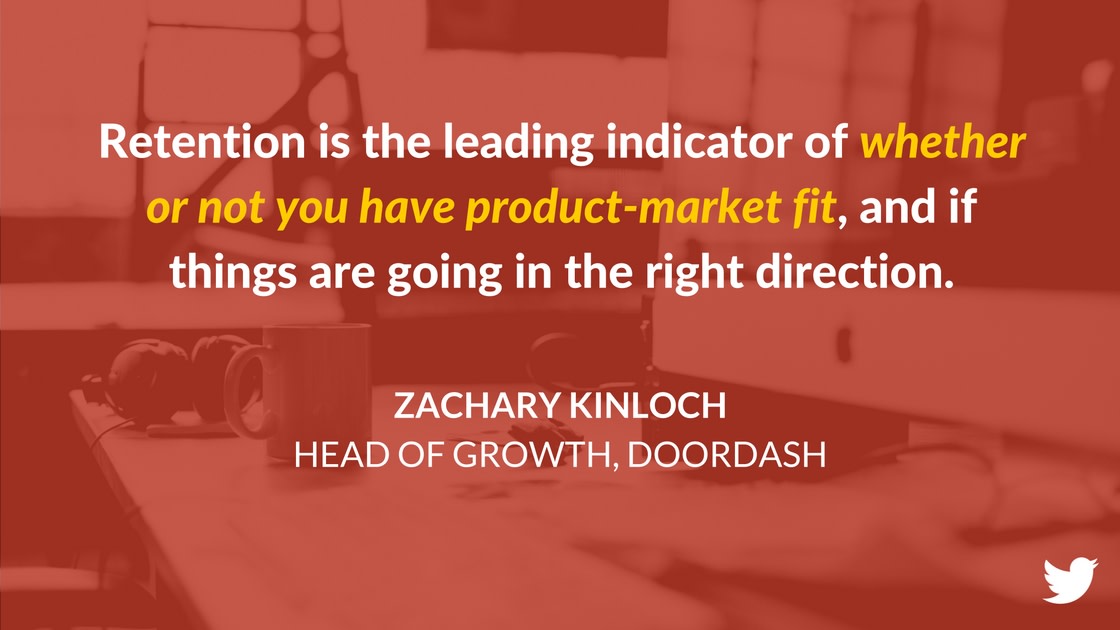 The growth team, specifically, uses Amplitude on a daily, even hourly basis, looking at key conversion funnels and running behavioral analyses on different cohorts. Understanding from where users are being acquired and which channels are performant are just a couple examples of questions of the team asks of their data.

Across the company, DoorDash uses Amplitude to monitor the metrics they care about. “It’s not just contained within the growth team or some engineering team,” says Zach. “It’s everyone across the company from support, engineering, growth, product, and whatnot. It’s used universally.”

At a high level, DoorDash’s most important metric is retention – the proportion of users that come back over time.

“If you have good retention, then you can accelerate growth, and everything follows. It’s the leading indicator of whether or not you have product-market fit, and if things are going in the right direction,” says Zach. “That’s what we look at most frequently.” 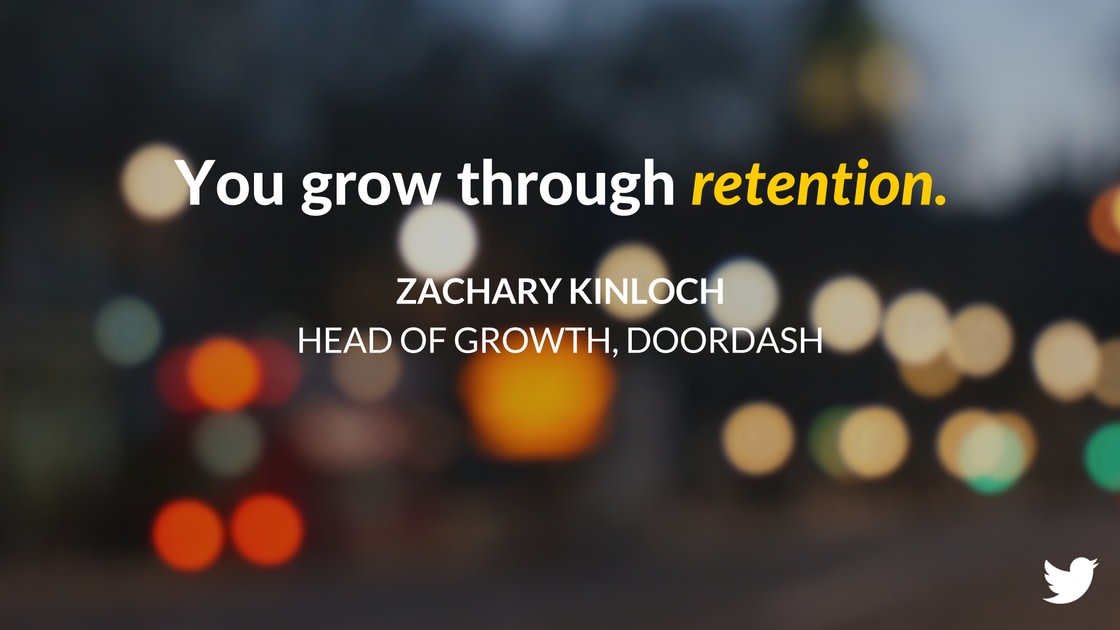 For DoorDash, it was easy access to the behavioral layer, speedy retention analysis, and access to the raw data that put Amplitude ahead of their competitors.

Prior to Amplitude, retention analysis would take 30 minutes to an hour to see something simple; now, says Zach, it only takes minutes. “It saves a lot of time for the marketing team and the paid acquisition team,” he added.

And while Amplitude was great for allowing anyone at DoorDash to access the data they needed and arrive at insights, it also allowed more technical users the ability to dig into the raw data via Redshift.

“You always want to peel back the layers of the onion. When you see an interesting trend, you always want to go back right into the raw data, get your hands dirty, and start querying it directly,” says Zach. “That was one of the key selling points of Amplitude.”

As we wrapped up our interview, I asked Zach to offer up one piece of advice for people just starting out thinking about their company’s growth. His words are something we believe in unwaveringly at Amplitude: