How Pokémon GO Lost the Players But Won the Game

Sure, the fad might have been over quickly—but the game is continuing to prove that it can be successful long after the hype.

Within 24 hours of its U.S. App Store release, Pokemon GO became the biggest game of 2016.

Pokemon GO broke the record for first-week downloads and became the fastest app ever to reach number one on the Top Grossing Apps chart.

But Pokemon GO isn’t as short-lived as this spike and fall would suggest. Sure, the fad might have been over quickly—but the game is continuing to prove that it can be successful long after the hype.

Since their record-setting first-week download numbers, Pokemon GO has seen a nosedive in acquisition. 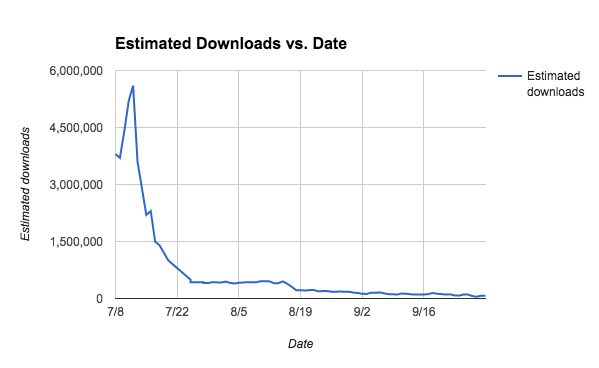 As the graph depicts, after the initial surge of downloads in mid-July, the game saw a steep decline in downloads from over 5 million per day around July 12, to around 450,000 per day by July 25. Downloads have continued to decline since then.

The drop-off looks damning compared to the spike in downloads that came right before. But that spike was caused by the incredible public hype surrounding the launch—the hype that led to 50 times the initial user acquisition than software developer Niantic expected.

And since Niantic spent virtually nothing on player acquisition, none of this cost them anything. Except in terms of server maintenance, of course.

The decline in public interest and downloads is not necessarily a death sentence for Pokemon GO, or even an indication that the game was a flash in the pan. Plummeting acquisition numbers can be a bad sign, but they can also be a sign that you quickly saturated a market or got a huge press bump. Pokemon GO had both.

A study by mobile research company Apptopia published Pokemon GO’s ratio of Daily Active Users / Monthly Active Users. This is a standard way of measuring mobile app usage that compares usage each day to usage for the entire month. Pokemon GO’s DAU/MAU ratio drops to 40% of peak engagement by August 4, almost a month after the game’s release.

It’s tempting to use stats like this to create a narrative about Pokemon GO’s “decline.” But this ratio is probably not a good indicator of Pokemon GO’s long-term retention. In the first month of an app’s release, the MAU is probably going to reflect acquisition numbers more than real usage numbers.

There is a better way to look at this: weekly retention is not skewed by a particularly large spike in acquisition because it compares the number of active returning players each week from the previous week instead of comparing each day to the entire month. 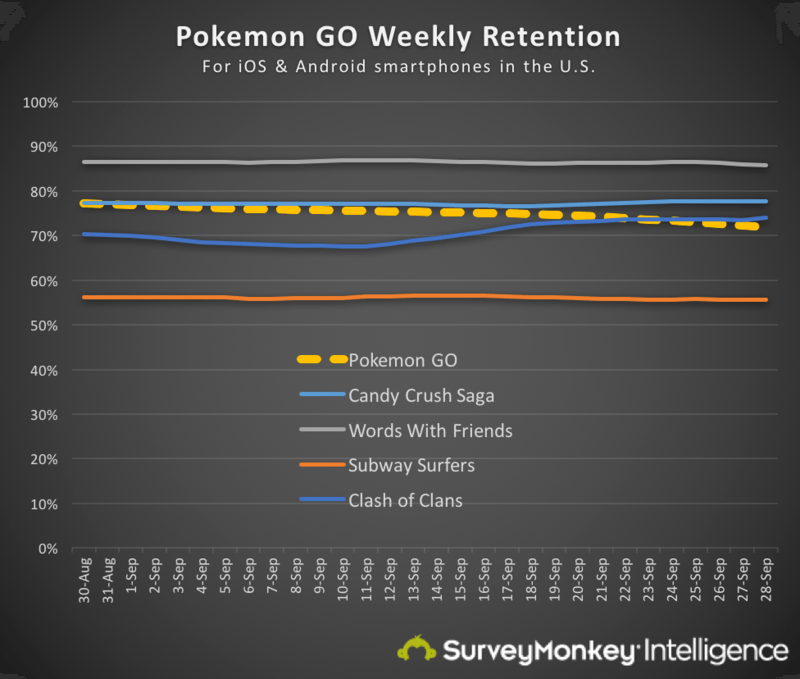 Through September, Pokemon GO’s weekly retention rate of 70% was on par with that of Candy Crush Saga and Clash of Clans.

Pokemon GO may have lost over 15 million daily users a month, but the game’s rate of churn is actually on par with other smash-hit games like Clash of Clans. Both apps were seeing weekly churn rates of around 25% as of October 5.

Pokemon GO’s DAU/MAU ratio for its first month is misleading. It was skewed by the spike in acquisitions following the app’s launch.

Pokemon GO has normal weekly churn rates for a top app—it just has more players to lose, which makes its numbers of lost players sound worse than they are. At the beginning of October, Pokemon GO still had over twice as many monthly active users as Clash of Clans—and most importantly, it had a loyal core of paying players. 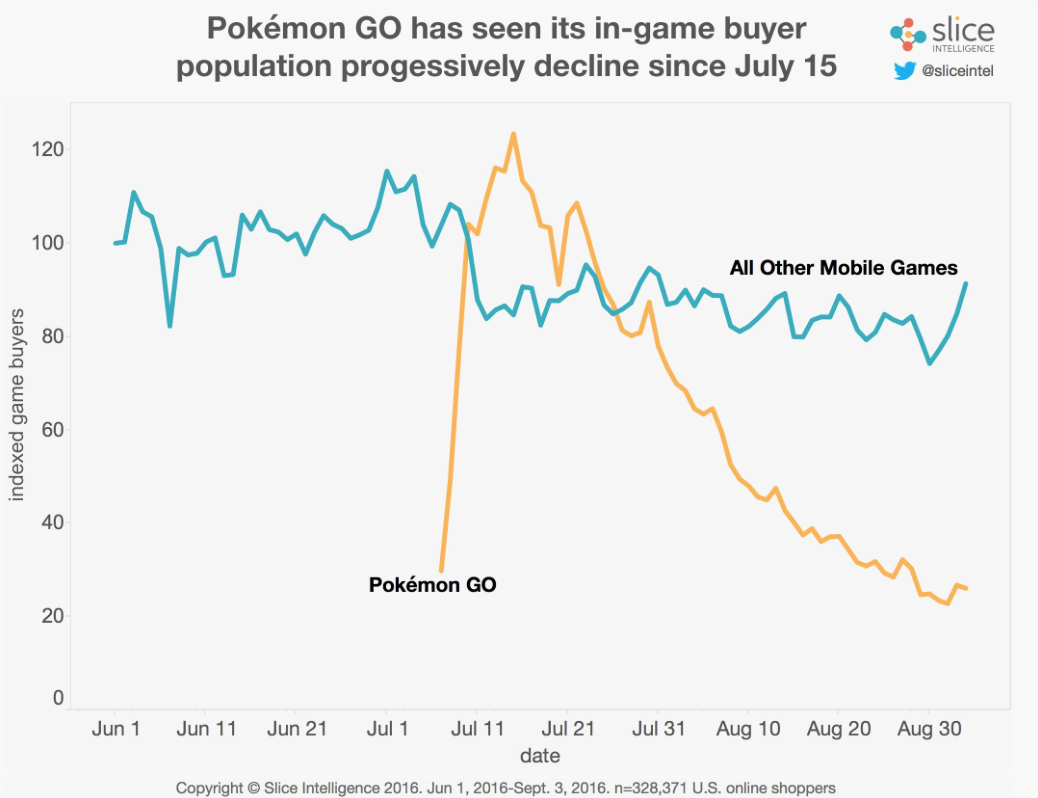 Yet Pokemon GO was still generating over six times the in-game revenue of Candy Crush Saga—the second-most profitable game in the app store. 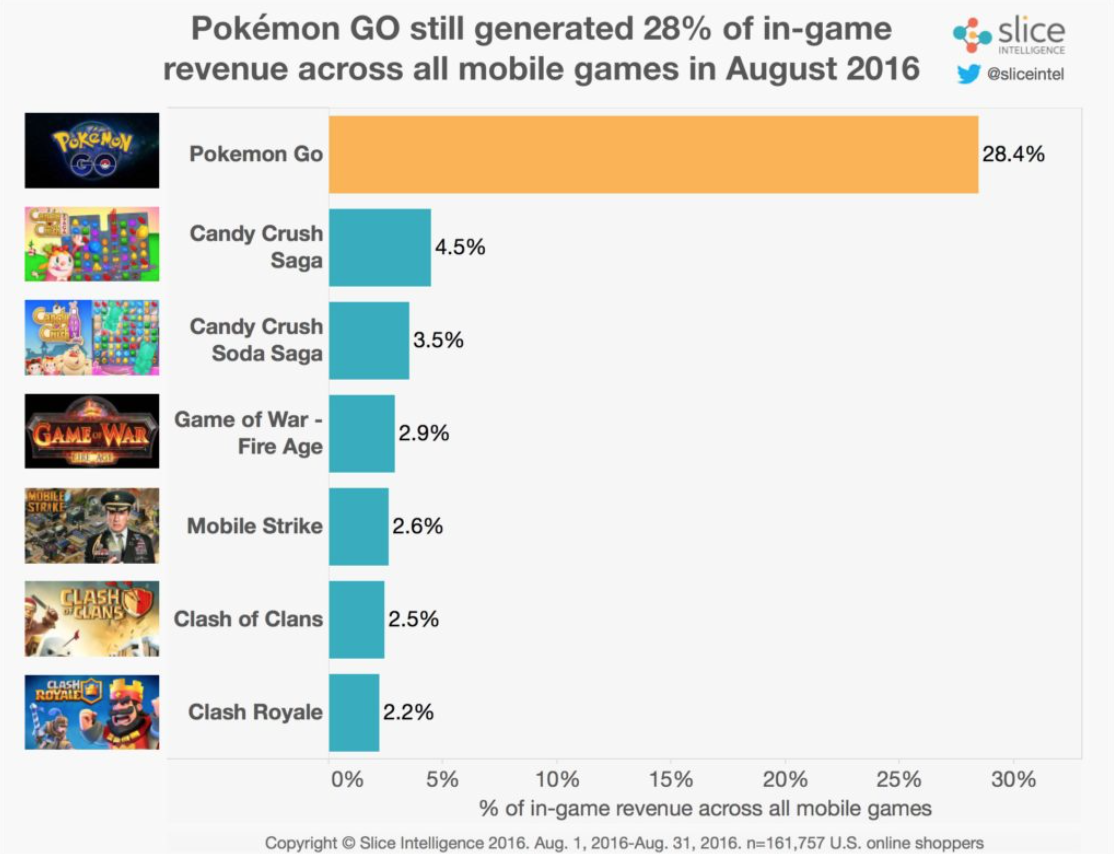 This indicates that most of the revenue—which comes from in-app purchases in the free-to-download game—is coming from a loyal player core.

Slice Intelligence also reports that 11% of users making in-app purchases were players who had made 10 or more in-app purchases in the previous year. In the mobile gaming app industry, these rare but valuable players are called whales, like the high-rollers in casinos who are lured to spend a lot of money.

Pokemon GO can lose 80% of its paying players and still pull in more revenue than any other mobile game thanks to its core group of paying players.

Whales only make up 3% of the overall mobile game app user population, but they generate two-thirds of the market’s revenue. Pokemon GO’s financial success was in catching these loyal whales who will continue to stay and pay while casual users (who were contributing very little to revenue) churn.

The reality of Pokemon GO’s longer-term success is less exciting than its sensational debut. Pokemon GO’s rates of churn are generally on par with other top mobile gaming apps. And despite decreases in other metrics, Pokemon GO is making over $2 million a day and has sustained a top 10 grossing figure in the app market.

Naysayers who dismiss Pokemon GO as a “craze” are missing the point: if you hook enough high-paying players who love your game, you don’t need sky-high acquisition rates or media attention.

And despite what the haters are saying, Niantic is quietly releasing updates and new features even now—whatever they need to do to keep those core players around and keep the money rolling in.