Building a sustained active user base helps a product stay alive and thrive.

You’re seeing those download counts for your app start to rise. More and more people are signing up, logging in, and taking first steps. Your app looks like it’s on its way to success.

But it may not be time to celebrate just yet. While downloads and first-time visits are exciting, they only tell a fraction of your app’s story; it’s important to measure how many users actually find long-term value in your app.

By analyzing long-term metrics, you’ll get a better idea of exactly how valuable users consider your app for continued use weeks and months after launch. The most important of these metrics are:

Here we’ll show why measuring this mobile user data helps you track your own progress and see how you stack up against other successful apps. You’ll learn how to plan the long-term trajectory of your app’s development, and ensure that it’s a long trajectory for users too.

1. Understand how to measure your retention

Many products measure the long-term success of their product with retention, the change in active users over time.

The tech industry measures retention in a number of different ways, each of which makes sense in different contexts.

As we’ve mentioned before, N day retention measures the proportion of active users that are active on exactly the Nth day after performing some start event; typically this “Day 0” is the first day the user uses the product.

Analogous to N day retention, weekly or monthly retention looks at the proportion of users that are active any time during the Nth week or Nth month after first use.

Pokémon GO, for example, found that trying to measure retention by looking at their DAU/MAU ratio for the first month after the app’s launch was misleading. The hype surrounding the game’s launch drove up the initial downloads. This led to a very high MAU. However, the DAU on subsequent days as hype leveled off was low. This made the DAU/MAU ratio on any given day much lower than for other apps.

Measuring retention on a week-by-week basis was a better indicator for them for determining how many players were actually coming back week after week.

Take action on your retention

A successful growth team will investigate retention of their users as they move through different phases of being an active user. Among these phases, retention of your new users is incredibly important because it’s your app’s first impression.

Most users decide whether they want to keep using an app within the first 3-7 days after download. This means that measuring 7-day retention after the date of downloading will help you determine if your app is succeeding at getting users to return within that critical window. 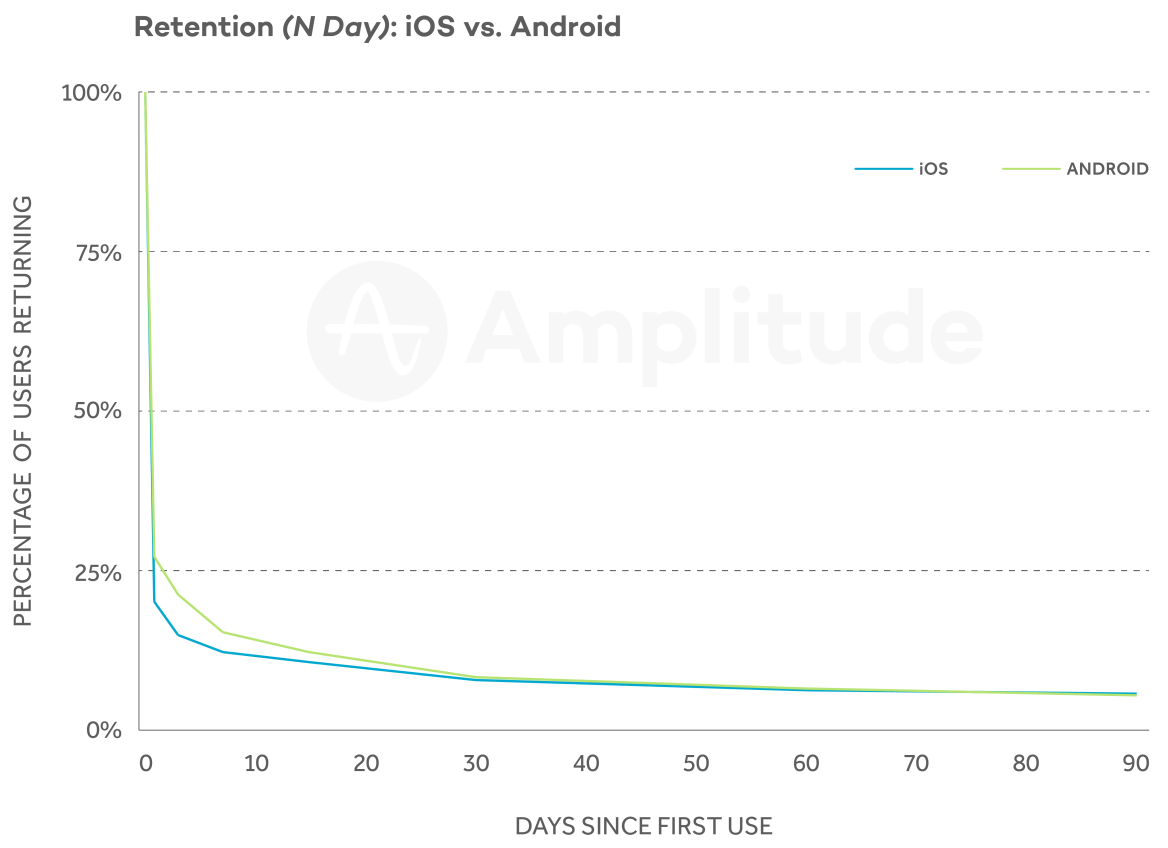 The benchmark for the upper limit of Day 7 retention is 22% for both Android and iOS apps. Aim for this retention rate seven days after download to shift this curve up and have more sustained active users at 30 days, 60 days, and later after downloading.

Take action and get more users to return within this critical window by making sure the user experience in the first few days is the best it can be:

Engagement measures how many times a user performs a specific action in your app. These events may include opening the app, using a certain feature, reaching a new level, or making in-app purchases.

When a company finds the event that best engages users, they say that a user taking that action is having an “aha moment.” They are realizing the value of the product so that they will want to return and keep using it.

The events that cause “aha moments” are often startlingly simple. Twitter found that users who followed at least 30 people were likely to continue to be active, while users who didn’t follow 30 people were unlikely to remain active.

Take action on your engagement

Your aim is to maximize engagement by finding the event that is most successful at getting users to return.

You can measure engagement for any event by measuring the percentage of people who perform an action out of the population of people that use the app. You can then section off this population as a behavioral cohort.

Creating behavioral cohorts allows you to group users based on actions they perform and learn more about how those particular users interact with the app. You’ll gain insight on the engagement impact of different actions by measuring which event is most closely correlated with returning users.

Here’s how to calculate the positive predictive value: divide the number of people who returned after performing a certain action by the total number of all returning and non-returning people who performed that action.

3. Be aware of your product usage interval

Some apps are meant to be used daily, while others might serve purposes that only make sense every other day or weekly. The product usage interval for your app is the frequency with which you expect people to naturally use your product.

Understanding your app’s usage interval will allow you to better understand metrics like retention rate and engagement. If your product usage interval isn’t daily but is instead weekly, measuring N-day retention on an arbitrary day might not capture an accurate sample of your returning players. In that case, something like this graph would look very disheartening. 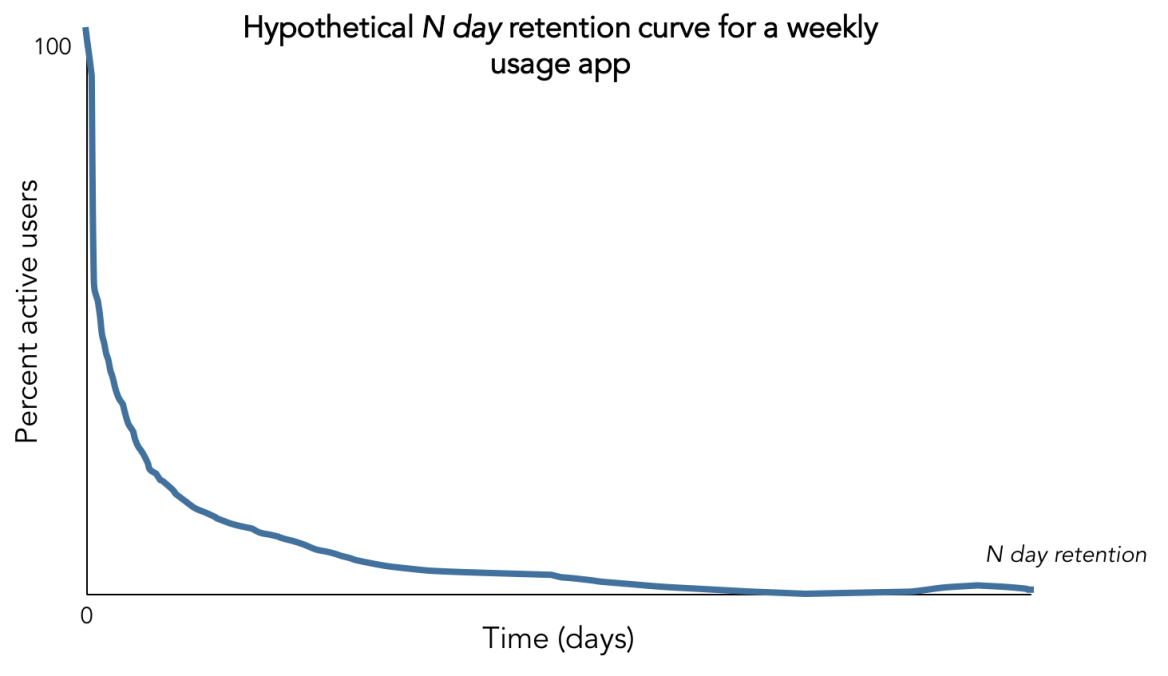 Meditation app Calm, for example, realized that their optimal product usage interval was about once a week .

Your product usage interval is a metric that characterizes your product, and it should be one that you monitor and pay attention to, though you may not necessarily set any goals against it.

While you may have an intuition already about how often users come back to use your app, you can systematically determine your product usage interval by:

We usually define the product usage interval as the time it takes 80% of users to complete the two critical events. 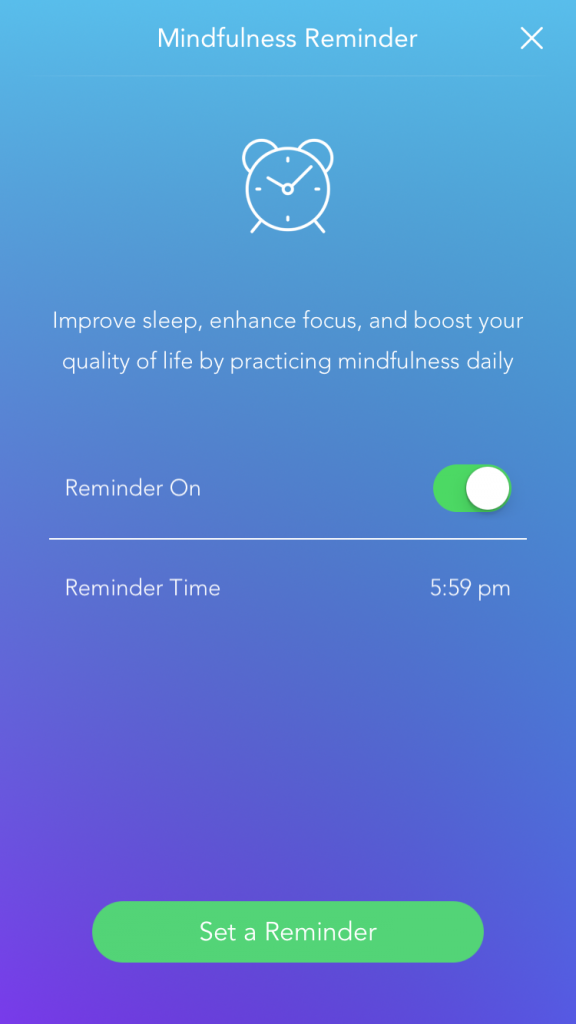 Focusing on short-term success is a great way to fuel your ego. But building a sustained active user base helps a product stay alive and thrive.

Strive for these benchmarks when you’re aiming for long-term success:

When you see users retaining, engaging with your app, and completing important actions sooner — then you can think about the champagne.

Check our Ultimate Guide to Mobile Analytics for even more information with over 50 more resources for app makers.