Are You Sabotaging Your App Downloads? Read This Before You Launch

Daily, we hear companies tout their new app as the latest and greatest. Have you ever stopped to think about the sheer number of apps that exist today? The stats are mind blowing. Here are just a few of them:

It’s every developer’s dream to launch an app that drives millions of downloads. After all, viral downloads are usually seen as a marker of success. Suppose you’ve set up a growth plan for your app and managed to drive a significant number of downloads. Before you start celebrating the number of downloads consider this: you might lose a majority of those new users within a week or month. If you’re only focussed on driving downloads, then you’re ignoring a major factor into your app’s success: retention. You’re only seeing the initial attention and missing the long term goal of driving users back to your app. Apart from downloads, a closer inspection is necessary to understand whether people are doing something with it afterwards. Are your new users playing songs, sharing content, posting pictures, updating their calendar, or tracking some kind of progress? If not, you’ve fallen victim to misleading data. From the outside, it looks like you’re experiencing rapid growth, but the reality is that you’re losing users and don’t realize it. It’s only a matter of time before you learn that your growth has dropped and plateaued, and you’ve lost the opportunity to turn a majority of your new users into retained users. 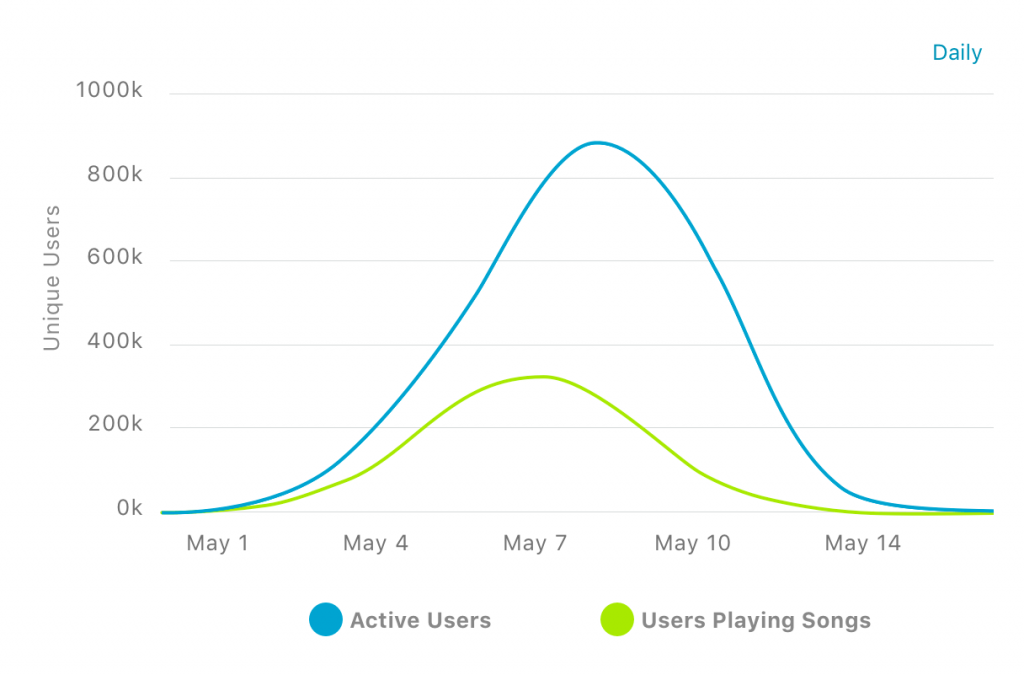 To sustain growth, design for your users

So what constitutes a successful number of downloads? It’s safe to say that if your app attracts a few million downloads in a short period of time, you’re onto something. However, it’s not the number of downloads that make an app successful, it’s your ability to take that initial spark of interest and use it to maintain an upward trajectory of growth for a sustained period of time. You need to build an app that people routinely use. Take Neko Atsume, the Japanese cat game, as an example. In less than a year, it raked in 5.5 million downloads. By the end of 2015, a little over a year after launching, downloads had swelled to 10 million. That’s a growth rate of 82%! 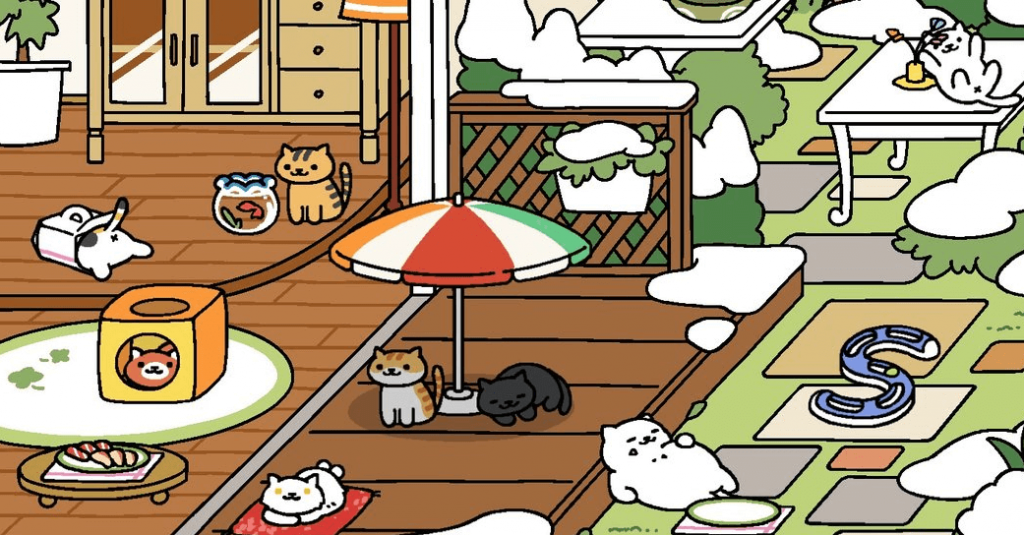 [Source] They’ve attracted millions of new users by building an app players are quick to share by using this approach:

One surefire way for your app to fail is launching it before it’s ready to handle increased usage. Nothing turns users off more than an app riddled with bugs and prone to crashing. We expect apps to run quickly and with minimal flaws. Prior to launching take time to perform rigorous testing to identify existing bugs. If you absolutely must launch before your app is 100% ready, communicate openly with your users in app or email. If the problem is temporary, assure them of this so that they know what to expect. The last thing you want to do is leave them wondering and frustrated. They’re more likely to jump ship and download something else because of the bad experience.

You’ve spent countless hours testing and tweaking your app before launching it, but user uptake isn’t guaranteed. In order to build a successful app that experiences steady growth, you can’t just build an app and throw it out into the world hoping for the best. You need a strategic plan that will guarantee long-term success and stickiness. 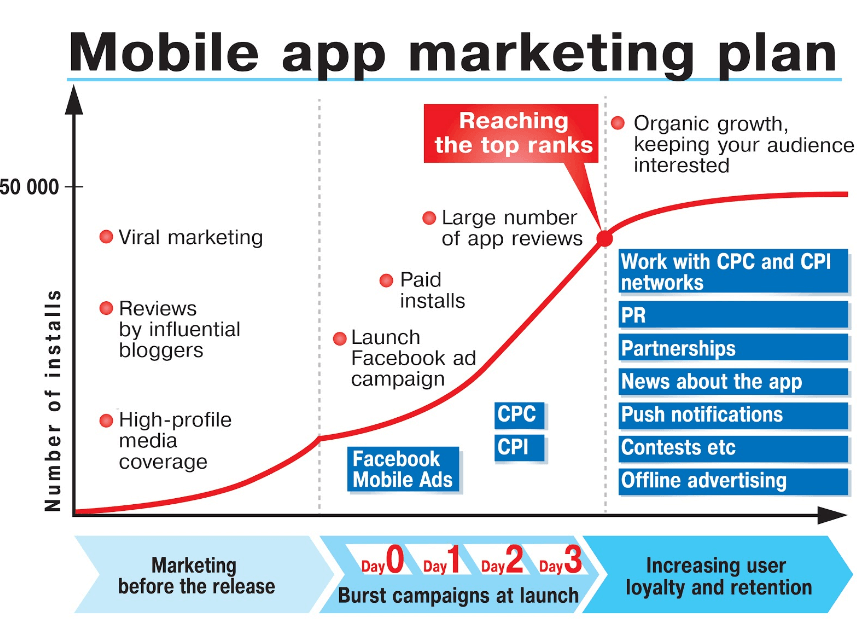 [Source] A marketing plan is really important during each stage of your app, but if you’re just starting out, chances are that you don’t have a massive marketing budget. An affordable approach is to use the following ideas for your growth strategy. Content: If you’ve just launched a new app, you might not have a blog with tons of traffic just yet. A solid alternative is to write blog posts for influential tech product sites that get you and your app in front of the right people. A blog on one of these sites will add an element of legitimacy to your app and can give your app the push it needs to garner steady downloads. Social Media: This has the potential to be a powerful marketing tool if used the right way. Be proactive about your social media presence by engaging with your target audience. This also acts as a quick and easy way for you to hear directly from them what they love about your product. They’ll also tell you where there’s room for improvement so listen to them. Push Notifications: When done right, push notifications are an excellent way to attract users back to your app. As simple as it may sound, send users useful notifications that will improve UX or pull users back to your app. If your app doesn’t have a reason to send notifications yet, then don’t send them. Useless notifications will make users opt-out from them anyway. Product Reviews: Along the same lines as feedback from social media, give users lots of opportunities to review your product while on your site or in your app. The more reviews you receive, the better direction you’ll have to improve your product. Positive reviews also help increase your ranking on app sites. Monetization: Users are far more receptive to free apps than paid ones, but since you want to make money from your app, consider phasing in in-app purchases. Show users how great your product is and then add in features that are available at an extra cost. With this approach, you don’t charge users who don’t want to pay for your product, but you give them the option to pay if they want to access features that are more relevant to them. Product Analytics: Listening to user feedback is important, but it’s also critical to understand exactly how your users are behaving in the product. Look at an old app called Burbn: a social app where users could check into locations, earn points and make plans with friends, post pictures, and more. Burbn’s unsuccessful growth prompted its founders, Keith Sawyer and Mike Krieger, to use analytics to understand how their users were actually using the app. They discovered that, of all of the features the app offered, users were only posting and sharing photos. So they got rid of the other features, focussed on just photo-sharing, and eventually relaunched as Instagram! Product analytics helps you understand the behaviors of both your retained and churned users, allowing you to appropriately enhance (or pivot) your product.

Make it work for you

So what have we learned? It’s no use attracting users if your app isn’t ready for them. Take your time to build a solid network and infrastructure so that crashes are at a minimum. Once you’ve turned a user off, it’s much harder to win them back for a second try. Get it right the first time. To bring your efforts together, have a growth plan (this is another good place to start). A strategy is super important if you’re to have any chance of being successful. Don’t be afraid to use the data you get from your strategic plan to improve your app and cater to the needs of your users.

Wendy is a Solutions Architect on the Success team, where she helps customers instrument and utilize Amplitude. She graduated from Stanford University and enjoys boards games, picnics, and learning a new skill every month.