How to Harness Network Effect to Grow Your Product

Choosing a growth strategy that measures your cumulative value is important. Even though Metcalfe’s Law was developed at a time before the internet and social media, its concepts still hold true. Your product will become more valuable as you grow.

Many of the most successful product companies today rely on ‘network effect’ to drive growth, improve product stickiness, and create barriers to entry for competitors.

Even if you’ve never heard of a network effect, it’s likely you’ve been a part of it. Put simply, network effect is the principle that your product becomes more valuable to the user as more people use it, increasing the likelihood of advocacy and user retention.

Let’s take a look at a few examples:

Facebook - Probably the easiest example of network effect in practice: as a user connects with more friends they are able to access more content, speak with more people, and reach a wider audience with their posts.

Lyft - The type of network effect Lyft leverages is heterogenous as there is more than one category of user - riders and drivers. The more riders who use Lyft the more ride opportunities for drivers, and the more drivers using Lyft the shorter wait times and cheaper the ride for riders.

What you might not realize is that there’s actually a technical theory that deals with this exact concept. It’s called Metcalfe’s Law. The law states that the value of a network is tied closely to the number of users connected within it.

But how do you harness the power of Metcalfe’s Law to get to this point? Let’s take a look at how to use Metcalfe’s Law (the network effect) to build a business that attracts more users so that it becomes more valuable as you grow.

The foundations of Metcalfe’s Law and network effect

Ethernet ports. Before wireless, every computer had one (most laptops don’t anymore, but there’s a dongle for that). An electrical engineer named Robert Metcalfe co-invented the ethernet port in the 1970’s. It became the ubiquitous way to connect computers and form a network to transfer data. Since then, ethernet solidified its place in the networking world.

It was here that Metcalfe’s Law was born. Metcalfe noted the growing value of a network as connections increased. 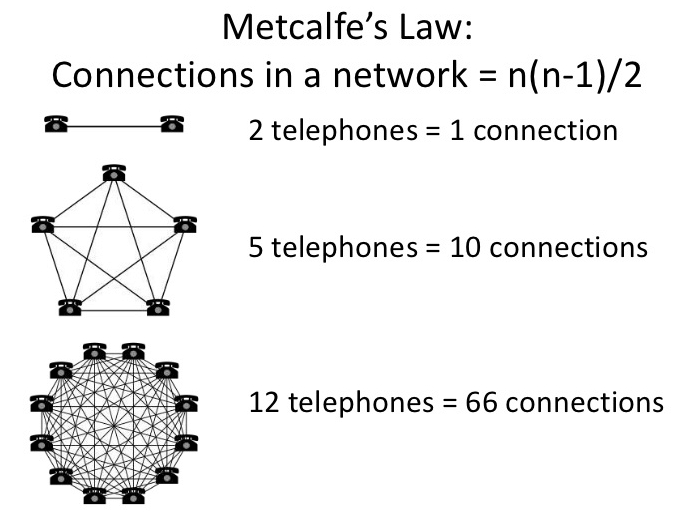 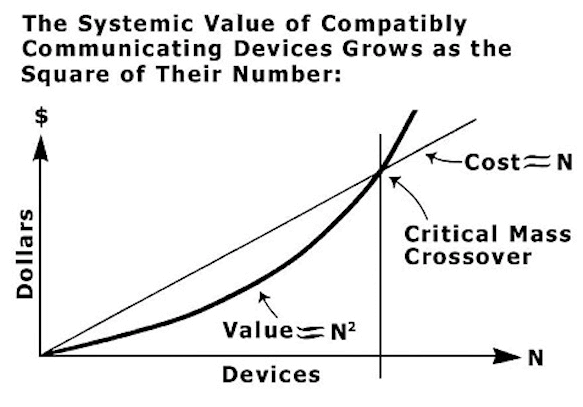 Let’s break this down. _n_ refers to the number of users in your network. Each connection the user makes within the network is calculated as _n_-1. When first introduced, Metcalfe’s Law assumed that each node or method of connecting—like with a phone—was equal, therefore the total connections = _n_ ( _n_ –1) or _n_^2.

Today, social networks like Facebook use Metcalfe’s Law to put a value on their growing networks. But when it comes to social media, not all nodes are equal. Some think that the idea of increasing value of a network based on increasing connectivity is flawed because it paints an ideal yet unrealistic picture.

It assumes that each node within a network is equal. However, social networks can’t be wrapped up in a pretty bow and treated the same way. That’s why some think that Facebook has overestimated its active user base.

Let’s take a closer look at how you can use Metcalfe’s Law to reinforce your business by boosting long-term retention and growth.

Choose an approach that works for you

There are two approaches to applying Metcalfe’s Law to your business. Using qualitative and quantitative approaches will help give you a valuation that means something.

Social networking platforms are vast and cover a variety of niches. Whether your users share their opinions on Twitter or their work history on LinkedIn, there’s no shortage. If you’re new to this marketplace your growth relies on your ability to communicate your value to users.

Because nodes or, in this case, people who use social networks, don’t have the same value you have to know who your users are. Some might access your network daily to post content or send data while others are just occasional visitors. To make Metcalfe’s Law work for you:

Nathan Black, co-founder of Village Defense, a company that provides real-time safety alerts to neighborhoods, points out “measure node value in terms of value received by all other nodes but generalize the receiving value.”

Take Bitcoin for example. They have millions of users worldwide but haven’t been widely adopted because they’re not as simple to use as credit or real cash. However, they’re working to increase their user base by increasing the number of merchants that accept their form of currency because they know this is something users want. By removing barriers to entry, it becomes easier for more users to join and use it.

Using the math behind Metcalfe’s Law, you can figure out the value of your business over time. Let’s look at the Bitcoin example again. Keeping the foundations of Metcalfe’s Law in mind, that the value of a network increases as the number of users grows, they saw an increase in their value over the course of a year when they analyzed daily active users (DAU).

Using the idea of viral cycle time, which is the amount of time it takes for you to attract new users to your product, over time it gets shorter as users become more engaged and rely more on the product.

They’ve found that for every new user they add each day, they add $20,000 back into their network. If there’s an increase in DAU, Bitcoin’s value increases proportionally, in accordance with Metcalfe’s Law.

It’s important to note that when using this approach, depending on your chosen industry, fluctuations in the data you collect means that growth won’t always align with the formula. Rather than relying on one magic number, stick to a range.

Your approach depends on your growth strategy

In addition to Metcalfe’s Law, Zipf’s Law and Reed’s Law are also widely used to measure the value of a network.

Zipf’s Law explains that by adding more to a system, _k_, the new additions are a fraction of the total, 1/_k._ The value’s based on where these additions rank and their frequency. Think of your email, as new messages come in, new ones are at the top (high value because they haven’t been opened) and they’re counted as a fraction of the total number: email 10 of 1,000.

Reed’s Law explains that when it comes to social media, large networks grow exponentially. The value is in the number of subgroups created. Think Reddit when it launched in 2005. In a few short years it tripled its growth in one year, reached 1 billion users in early 2011 and doubled that by the end of the same year. Its Subreddit groups allowed it to grow so quickly. 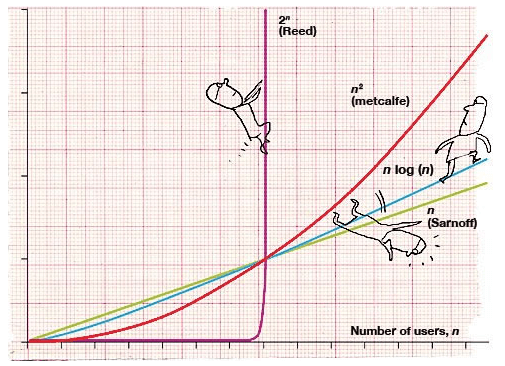 When you’re thinking about your growth strategy, you should know that there’s more than one way to measure value but Metcalfe’s Law provides a consistent approach. Zipf’s Law and Reed’s Law are a little more extreme in their approach. Reed’s Law predicts continuous exponential growth while Zipf’s Law predicts a slower increase in value as users increase.

The big takeaway here is that you need “to understand the economic costs and potential benefits of a network, and the actual conditions in the market, in order to apply a value to that network.”

Take a look at your competitive landscape, do you provide a solution to users that other social networks don’t? If so, this will help increase the value of your network. You’re providing a benefit that others don’t or if they do, they’re falling short of meeting user needs. Know what’s going on around you so that even though Metcalfe’s Law is more of a prediction than a concrete, absolute formula, it gives you data close to what you can expect.

Consider your next steps

Choosing a growth strategy that measures your cumulative value is important. Even though Metcalfe’s Law was developed at a time before the internet and social media, its concepts still hold true. Your product will become more valuable as you grow.

At the heart of it is know who your users are and how they’re using your network so that you can enhance it. The more you know about your network the easier it is for users to create exponential connections to reinforce your growing network.

Metcalfe’s Law helps you to choose strategies that focus on communicating your product’s value to customers to ensure you reach your goals because it gives you a starting point for developing your strategies.