Feature-less Roadmap: The Balance Between Delivering Concrete Features vs. Planning with High-level Themes

You shouldn't treat product roadmaps as to-do lists. Themes are a better way to stay aligned with your bigger picture product vision.

What’s the point of a product roadmap if it doesn’t have any features on it? Isn’t the entire reason for creating a roadmap to specifically layout which features are coming? And when to expect them?

That’s not a bad assumption. Most roadmaps are chock full of features, and 80% of the time they include specific delivery dates. But a feature-laden roadmap not only assumes your strategy is locked in place, but that the execution is already figured out as well.

Another danger is the implied commitment that once features appear on a roadmap they will definitely be delivered, even if the dates slip a bit. Since many roadmaps extend out 18-24 months, do you want to promise specific functionality two years from now?

But there’s another way—and frankly, I think a better way—to communicate long-range plans and strategic thinking without making unnecessary promises: theme-based roadmaps. What’s so great about themes? Let’s dive in and see.

Your product may technically be a log/collection/huddle/stack of functionality, but that’s not what your customers see. For them, it’s a better way to plan a vacation, streamline accounting processes, or distract themselves by blasting zombies in a post-apocalyptic Hellscape.

Watch the webinar: The Feature-Less Roadmap: Using Themes and North Stars to Ground Your Product Roadmap

“It forces you to consider ‘why’ you want to develop certain products or services,” says Marc Abraham of Settled. “I always take out the “feature” layer purely because I don’t want us to be pinned down to one solution.” 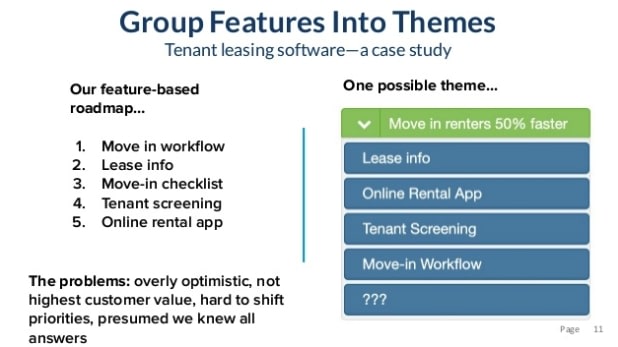 Theme-based roadmaps also do something most feature-based roadmaps struggle with: they build alignment and consensus. Roadmaps listing dozens of features create opportunities for endless debate, confusion, and disagreement amongst stakeholders. They become a convenient distraction.

An exec wants drag-and-drop. A salesperson clamors for double-byte language support because they have some hot leads in APAC. Marketing lobbies for Salesforce.com integration because they got a booth at Dreamforce.

Instead, to use the example of the battling executives above, it’s prioritizing improving UX vs. international support vs. 3rd party integrations. Agreed-upon corporate goals and KPIs should dictate which theme moves to the front of the line. This will transport the conversation from pet projects to larger, big-picture initiatives.

Shift to a more timely and topical debate

Raising roadmap context to the level of themes means more contentious (yet ultimately less important and low leverage) discussions get delayed. This reserves the timeliness of feature-specific decisions until you’re actually ready for product development work. No more deciding months or years in advance which specific features will be added. Instead, discussions occur far closer to implementation, when more data and context is available. There may eventually be bickering over which features are more important or urgent but those conflicts exit the roadmap process phase and move to the implementation phase where they belong.

This also enables you to be far more adaptive to changing market conditions while adhering to your overall product strategy. No longer will you be locked into prescriptive, solution-based plans too far in advance. This enables nimble execution to coexist with long-range planning. It additionally prevents preemptive and unnecessary feature commitments.

Make the move to theme-based roadmaps

While it might be new for your organization, you’ll be in good company if you adopt theme-based roadmapping. That’s because so many product leaders realize that tying roadmaps to product strategy instead of specific deliverables is the best way to get stakeholder alignment. Plus it means your roadmap won’t be outdated the moment it’s published. Keep in mind the following two things.

If you’re not sure where to begin, your overall corporate strategy is an excellent starting point. If you look at the existing objectives, you can work backward and translate them into themes.

Let’s say increasing adoption by human resources professionals is a strategic goal. Break that down into which big-picture themes would get you there based on the customer research you’ve done on that segment.

Those themes might include “Improving Benefits Management” or “Automating Professional Development & Training” or “Simplifying Payroll.” Each would then have a bunch of supporting features prioritized beneath them.

2. Specific but not specified

There’s also no perfect size for a theme; it could be knocked out in a single release or span multiple quarters depending on its scope and scale. So don’t feel like this is just another way to break your roadmap up into chunks of time; each theme will take as long as is deemed necessary.

Features are neither gone nor forgotten

Does this mean features will never appear on your roadmap? Probably not, but features will only appear within the appropriate context and as sub-elements of themes.

With tools like ProductPlan, individual features are slotted within the themes, epics, and stories. They remain hidden from view (but still available) during most presentations and conversations. You’ll still know they’re there. If someone asks about a particular one you’ll know where that feature fits into the plan given the current thinking.

Restore sanity and strategy to your roadmapping process with theme-based roadmaps. Break free from the feature factory mentality! Check out the webinar to learn more about feature-less roadmapping.

Victoria Fitoussi is the Content Marketing Manager at ProductPlan. She’s a writer by day and a comedy nerd by night. Victoria is passionate about delivering resources that help product managers be better at their jobs.

These features will help you and your team communicate and collaborate on insights in Amplitude with more speed, visibility, and clarity.

The best marketing teams use data to drive results. Here are five analyses your team can use to understand user behavior and campaign performance.

A Tale of Two Data Teams

A closer look at two ways that companies handle data governance—and why the optimal solution lies somewhere in the middle.