In the last couple years, Amplitude has seen exponential growth, establishing us as industry leaders in the space of Product Analytics.

The Amplitude chart (🐶🍗) below depicts one of the amazing things we achieved with this re-architecture. 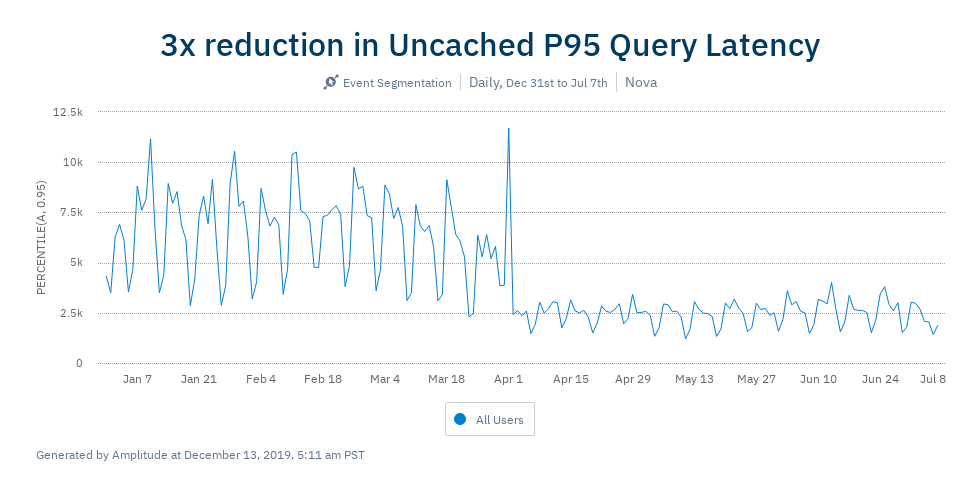 Nova is Amplitude’s in-house columnar-based storage & analytics engine. We built Nova from the ground up because of our unique flexibility and performance requirements. Nova’s original design is inspired by a few exciting systems like PowerDrill, SCUBA, Trill, and Druid. We also drew inspiration from data-warehouses like AWS Redshift, Google BigQuery, and Snowflake. I recommend checking out our Nova blog post to understand it’s architecture which will be important to understand the redesign and its benefits.

As we were analyzing the performance of our systems, we had a few discoveries.

Fragmentation of Data into lots of small files:

For our slowest queries, close to 65% of the total query time was being spent on reading raw data from the disk. Further investigation showed most of this time was spent opening and closing lots of small files. This problem is a little unique to us because of the way our data is sent to Amplitude. There are two key timestamps in Amplitude, event time (time at which the event occurred) and server upload time (time at which the event was uploaded into Amplitude systems). We often have significant differences in these two timestamps because of the following two reasons:

As all queries in Amplitude have a filter for the event-time, we want our raw data to be indexed by event time, so we can filter out data outside the query-range. We were using weekly event time buckets for our customers. 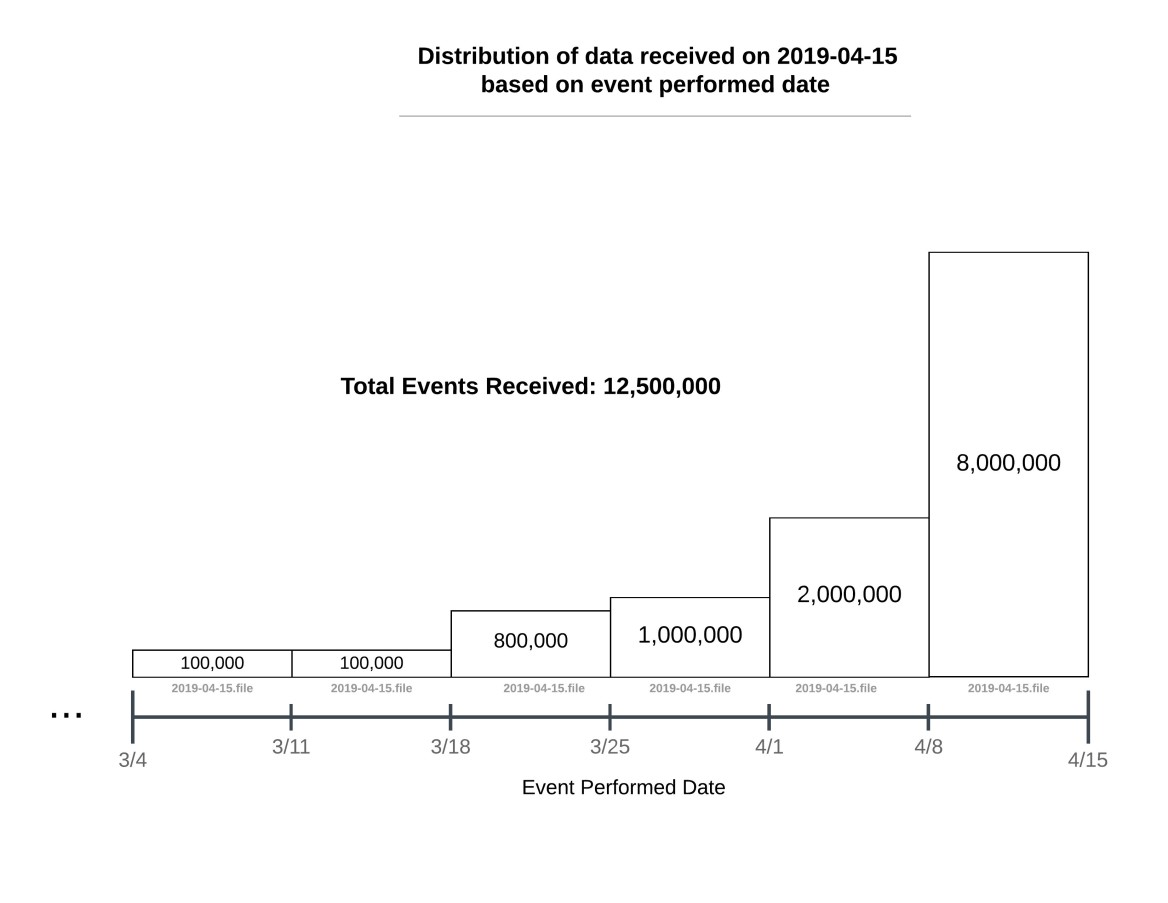 Compaction within a specific event-time-bucket can get us part of the way, but we were looking for a bigger improvement.

An average project sends approximately 189 columns to Amplitude. As is the case with most OLAP (Online Analytical Processing) workloads, we’ve always known that only 3–4 columns are used per query on average, that’s why we built Nova as a column store.

We also discovered that, in practice, customers only query a few select columns over and over. The average number of columns queried per customer over the last 30 days is just 16. 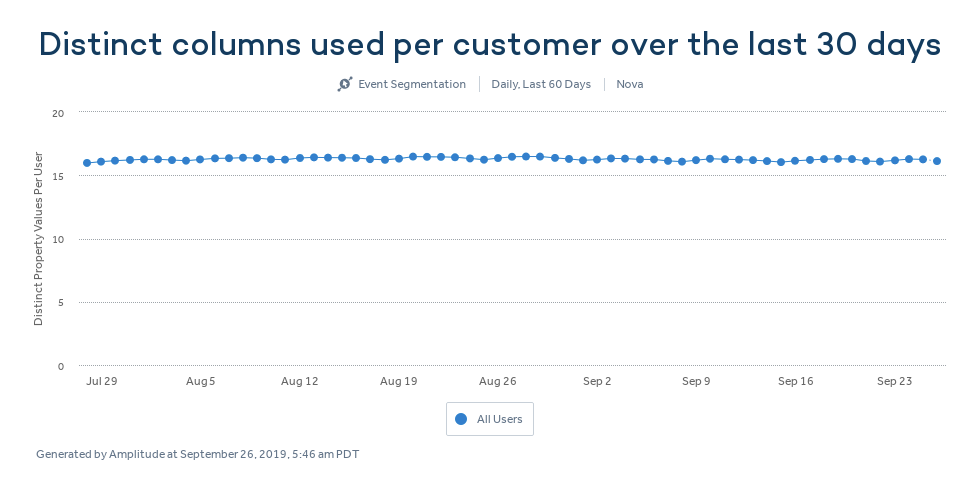 All columns for a specific batch of rows were stored in a single file, and our legacy storage system was downloading the entire file from our canonical store (AWS S3) to the local disk of our machines. 90% of the data on the disks was not being queried.

We decided file immutability was important and created files per server upload bucket, instead of generating files purely on event time and updating them as new data came in. To solve the small file problem, we created bigger files per server upload day. This was one of the most important pieces of the redesign. The old event time bucketing provided a built-in index on the time dimension. Given a time-range filter, it was straightforward for our queries to find the relevant files.

Example: if we get a query for Jan 2019, we only have to look into the sub-directories of 5 event time weeks that overlap the month of January 2019.

If we give up on static weekly event time bucketing to accommodate more events, these files will have a dynamic time range. In that case, we would need a data store that stores the start and end time of these dynamic files in an indexed and efficiently queryable way. We can then ask the data store for the files we should scan for a specific query. This led to the introduction of the File Metadata Store. 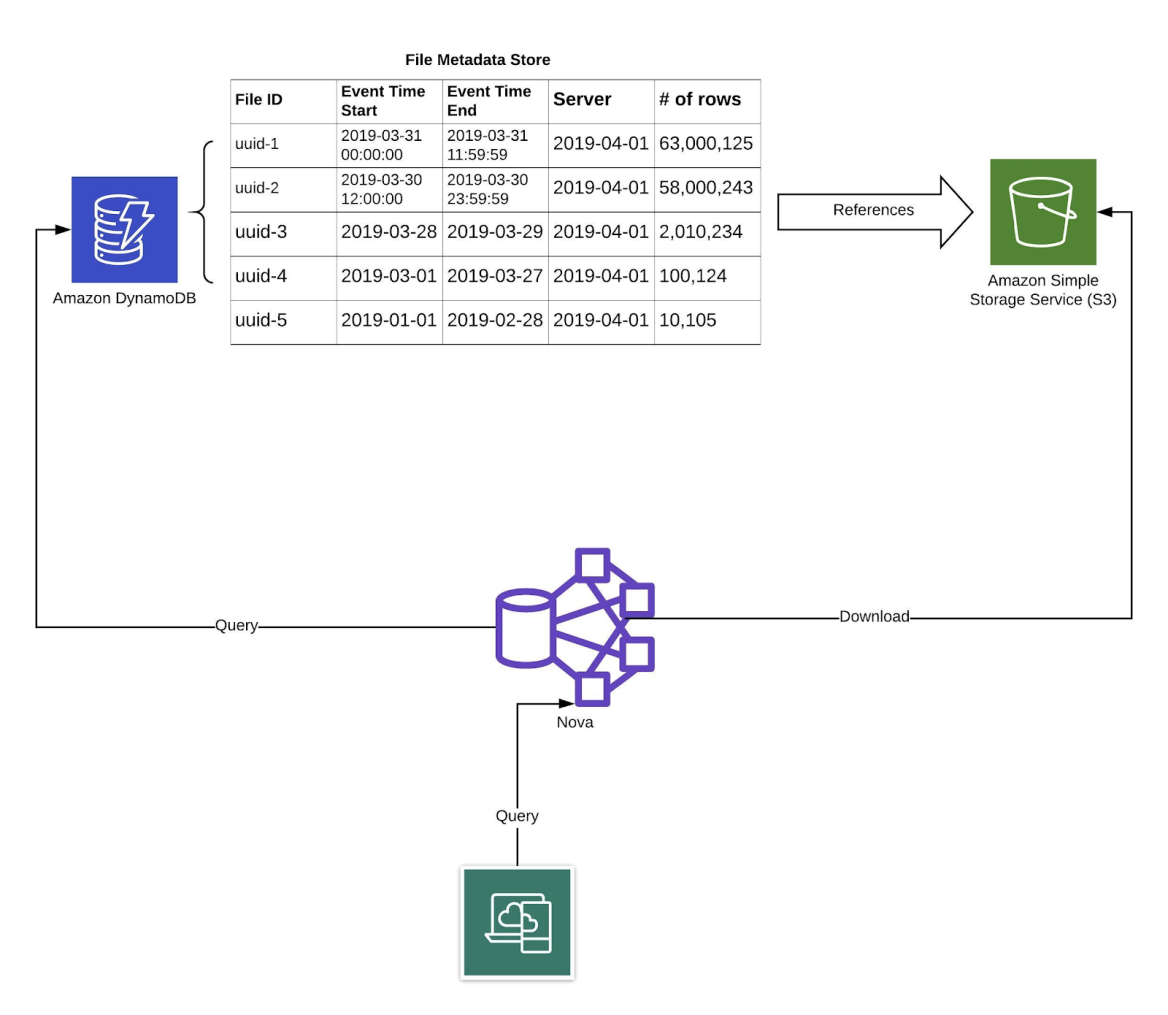 We are using AWS DynamoDB for our File Metadata Store. As the information in the metadata store changes only once per day, we cache the metadata store results heavily on disk and in memory on our query nodes. We have also built a more optimized metadata store lookup, more on it in a future blog post.

After moving to dynamic time-range files, the next question was deciding how to pick the time-ranges. While too many files are bad because of the extra overhead of opening & closing files, too few files are also bad because it makes our event time index less effective. For example: in a single file for all events, most of the data scanned might sit outside the query time range.

We wanted two kinds of files in our systems: 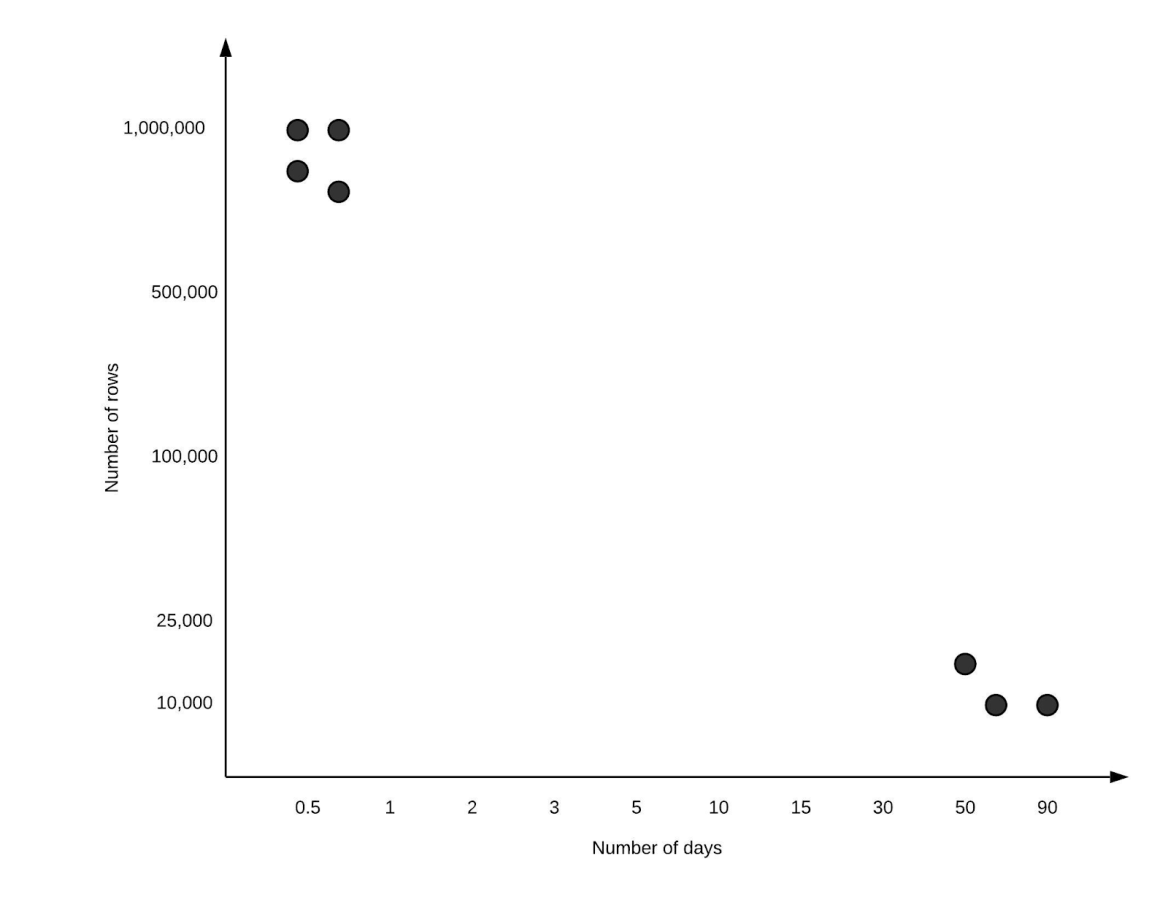 Our CTO, Curtis loves taking Distributed Systems problems into the realm of Mathematics and did a lot of interesting analysis to determine optimal rows per file for query purposes. More on that in a separate blog-post.

Reducing the number of files has had a massive impact on our performance numbers. As shown in an Amplitude chart below, our P95 response time which had slowly climbed up to 8 seconds went down below 3 seconds after introducing the new File Metadata Store to all our customers.

This was the biggest contributor to the performance gains from our re-architecture and reduced our P95 Query Latency by 3x. 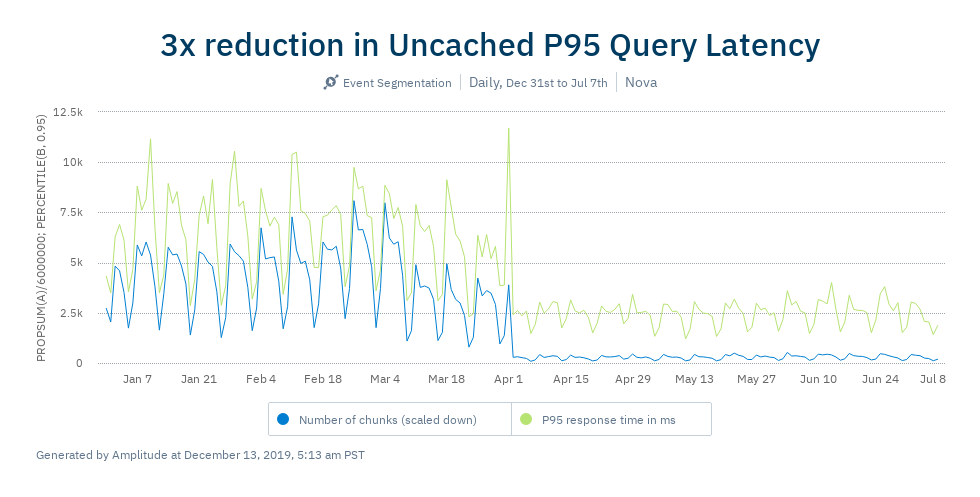 Introducing a Column Metadata Store and reducing server costs by 20%:

Once the metadata store gives the list of files to be scanned for a specific query, the specific query downloads the relevant files from S3. This is what a file looks like in Nova. 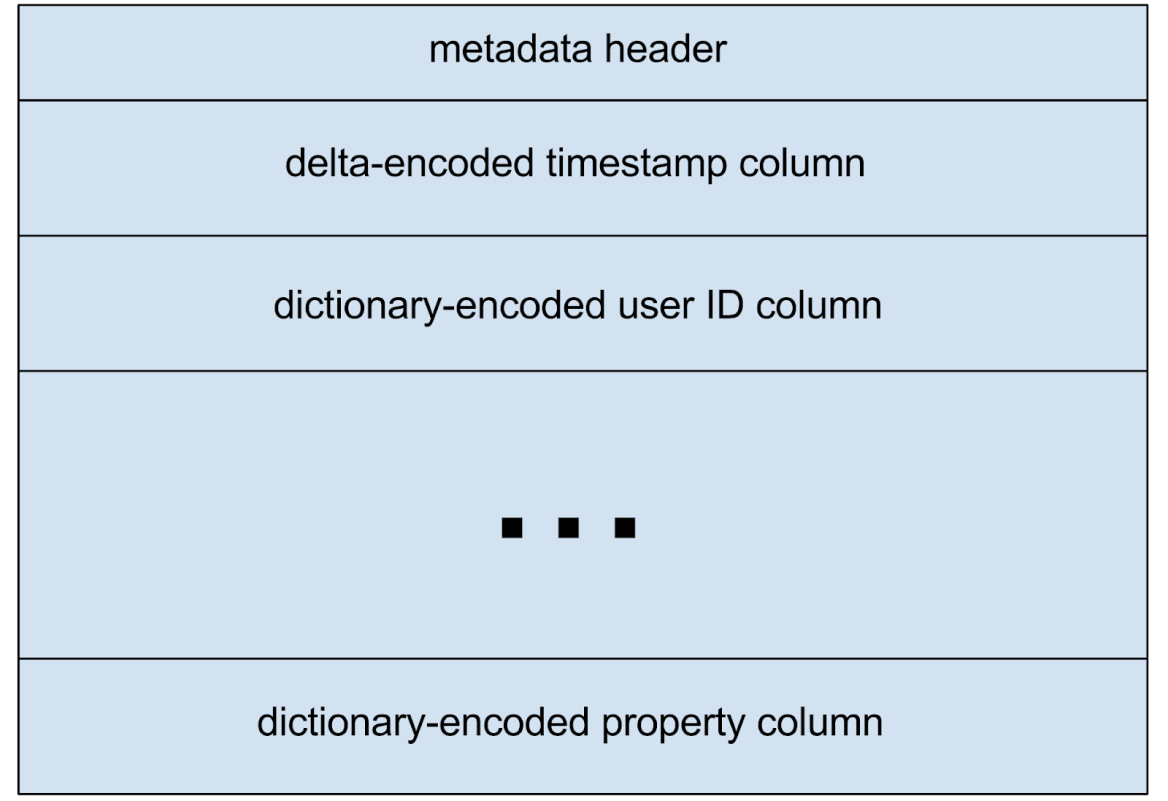 The metadata header in the file stores the start-offset and the end-offset of every column in this file. This allows us to only read the columns relevant for the query. A lot of the columns in these files on disk are never used based on our discovery that only 10% of columns are actually queried by our customers. Instead of downloading the entire file, we were interested in just downloading the relevant columns for the file. If we would create a separate S3 object for every column in every file, it would significantly increase our S3 costs, as S3 charges per PUT request. We could, however, leverage S3’s Partial Object Read capabilities to download only the relevant columns from S3 if we knew the start and the end offsets of the columns in the file. To satisfy the use case, we introduced another distributed data store that would store the start and the end offset of all columns for every file in Nova and we called it to the Column Metadata Store. 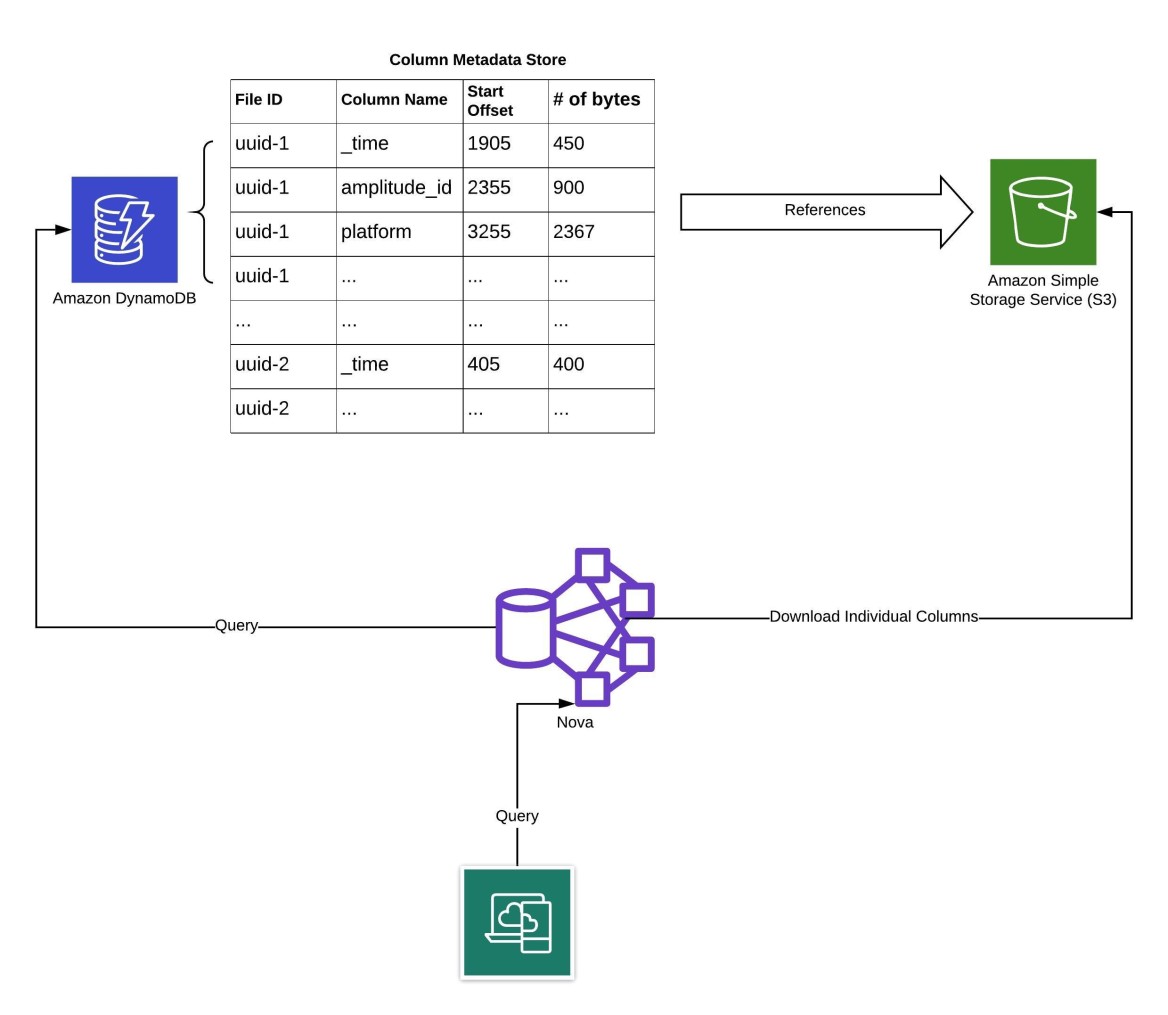 The Column Metadata Store is also built on top of AWS DynamoDB. As we were now only storing columns that were being frequently queried on disk, our disk storage requirements dropped by around 90%. We cache the S3 files on our EC2 server’s Instance Stores. Our legacy system had close to 1PB of Instance Storage across all it’s machines and our new system only needs ~140TB of instance storage. We reduced our EC2 server costs by 20%. We got this benefit by moving to servers with similar CPU & Memory instances, but much lower disk Disk resources. Reducing our Instance Store requirements by ~90% gave us more flexibility in choosing the right instance type from the wide range of options in the AWS EC2 ecosystem. We are also leveraging the new 5th generation instance types as we provisioned a fresh set of nodes for the new system.

Our Analytics Engine is one of the key differentiators that has helped us scale to meet the needs of our customers and help them in building better products. We continue to invest resources to support large volume customers, improve query latency, add new features, and reduce costs.

This re-architecture has enabled us to do the following in the future:

Because of similar reasons as above, we only have to download 10% of the data as compared to the legacy system. Our bootstrap time for a new node has reduced significantly because of the re-architecture.

Our new transformations feature allows customers to mutate and rename certain columns on query-time. As we have moved to cache only specific columns on disk instead of complete files with all disks, we can start materializing and caching these transformed columns on local-disk and in S3 to avoid applying resource intensive transformations at query-time.

We started brainstorming ideas and doing research in the second half of 2018. The development phase started in late Q3 2018 and took us approximately 6 months. The new system was going to replace an existing system being used by all of our customers across the world to run thousands of queries throughout the day, so we had to tread cautiously and avoid regressions. Once the backfill finished, we provisioned the new query clusters and ran both systems in parallel for approximately 6 weeks. We developed a client-side router to forward customer traffic asynchronously to the new cluster and compare responses for correctness between the old and the new systems. The entire roll-out phase took 8 weeks and we rolled out Nova 2.0 to all Amplitude customers on the 1st of April, 2019.

“This is the smoothest launch I have seen in my last 4 years at Amplitude.”—Amplitude Customer Success Manager 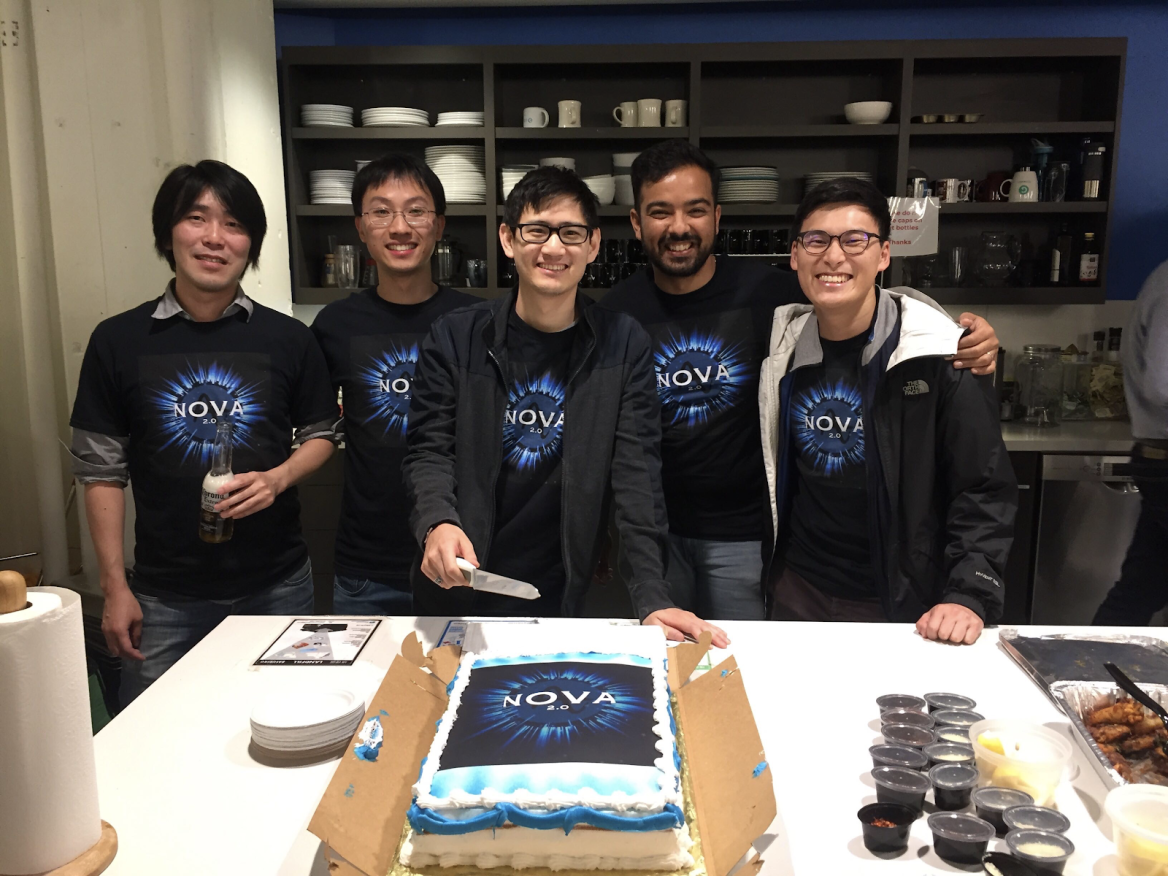 If any of this is interesting to you, please reach out to us by commenting on this blog or through LinkedIn. We are always looking for feedback and ideas to improve our infrastructure.

If you would like to join our team to solve problems and own part of our infrastructure, please reach out to us at careers@amplitude.com.

Nirmal is on Amplitude’s software engineering team. He has expertise in building scalable distributed systems and is our go-to Redshift guy.

Beat feature factory. Uncover your product's most important metrics to bring focus and alignment to your team.

How to Build Product-Oriented Engineering Teams

Engineers, this is how your team can get better at influencing product.