Instant Apps allow you to focus on what matters more: delivering a flawless mobile experience to your users.

In a nutshell, Instant Apps are “lite” versions of native Android apps that users can use without having to download anything. When a user taps on a deep link associated with an Instant App, they are redirected to a small “app”-version of the mobile website. Instant Apps open as quickly as mobile websites (sometimes even quicker), but they function like native apps. No downloads necessary. This makes user acquisition frictionless for app developers.

What that means for analytics is huge: no more working towards vanity metrics like installs and Play Store rankings just because people need to download your app to use it. Now, you’re free to focus 100% on what comes after—building an awesome user experience, improving your retention, and bringing even more users to your native app.

How do Instant Apps work?

Instant Apps work by modularizing native apps. An app is divided into smaller modules, or sections, each containing compartmentalized portions of the full app.

At Google I/O, the Android team released a demo video to show how Buzzfeed Video has incorporated Instant Apps. Click the image below to see just how fast you can access BuzzFeed’s Tasty channel on mobile using its Instant App.

Instant Apps read the same source code, use the same Android APIs, and run off the same Android Studio projects as native apps—so creating them shouldn’t be difficult; Google even claims it can take less than a day.

Why would you build an Instant App?

Instant Apps are awesome, but as with many shiny new tools, you might be wondering why you need them. There are actually a number of compelling use cases for them, ranging from simplifying browsing for your users, to increasing user acquisition and improving customer retention.

Some apps are really only used once, or at least just once in a while. These are the kinds of apps that users are made to download for a very specific function, but delete soon after to save on precious storage space. This is where Instant Apps can come in:

Getting people to simply download and use these kinds of “situational” apps is actually one of the biggest challenges they face. The commitment (however small) required to wait for the app to download, and then take up space on their device can introduce enough friction to turn users away. By providing the option to simply scan a QR code, tap an NFC, or click a Google search result to get into an Instant App, app developers can overcome this hurdle to user acquisition. Users can quickly get what they need and product managers can forego worrying about installations and instead track more useful engagement metrics.

Ecommerce businesses can benefit greatly from Instant Apps. Shopping on a mobile page can be a nightmare, especially if you have to scroll through many pages looking at tiny pictures to find what you want and then input all of your information before you can checkout. As we’ve seen, sometimes developers will resort to all kinds of annoying anti-patterns on their mobile site to get users to download their app. Yelp is an unfortunate example of this. When looking for a restaurant recommendation on the fly, users pull up the mobile site where they’re greeted with “Open in the Yelp app”. This pops up again when they choose a restaurant. And if you want to read more reviews, it’s a hassle to do so without having to download the app. 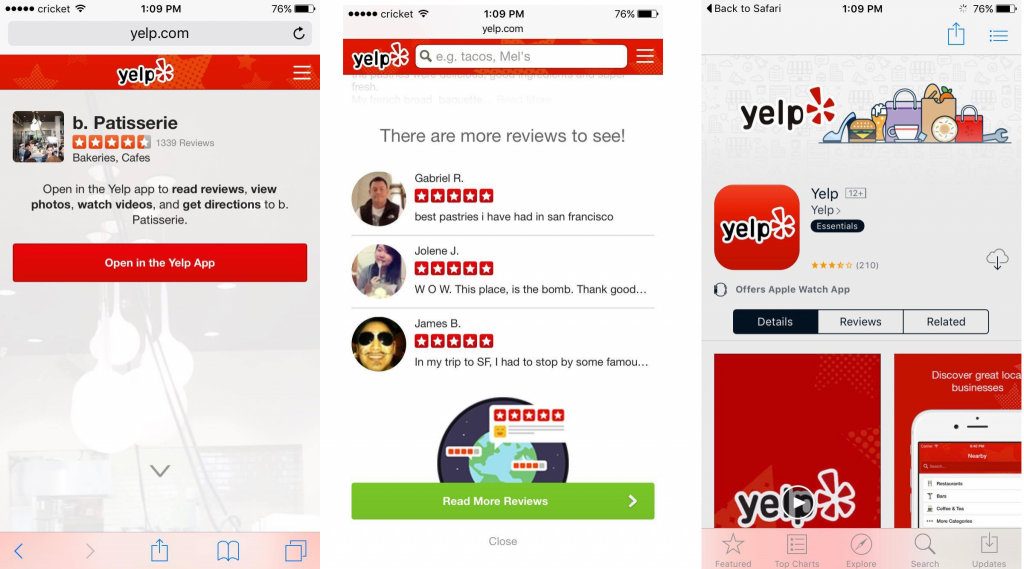 When customers search a product on mobile, directing them to an Instant App that provides all the necessary information can save so much time. With a simple “Add to Cart” link and a “Checkout” option that already has all their information filled out and connected to Android Pay, users are much more likely to follow through and complete the purchase.

Takeaway: Instant Apps can make for a better user experience

Often ecommerce businesses have people who want to use their product. The problem is, the mobile web user experience and the push to download the native app can be so annoying that users just end up dropping out of the funnel. Instant Apps go a long way toward making the user acquisition process smoother–because of that, developers can spend more time and energy on testing and improving user experience.

Many media and entertainment companies often struggle with the challenge of making customers choose between two “good” options–mobile web or native app. Customers may download an entertainment app to watch specific videos once in a while, but when the time comes to free up space for a more “important” app, that will be one of the first to go. The corresponding mobile site may be nicely formatted and easy to use, but poorly optimized ads will often slow down the page and kill the user experience (see below). 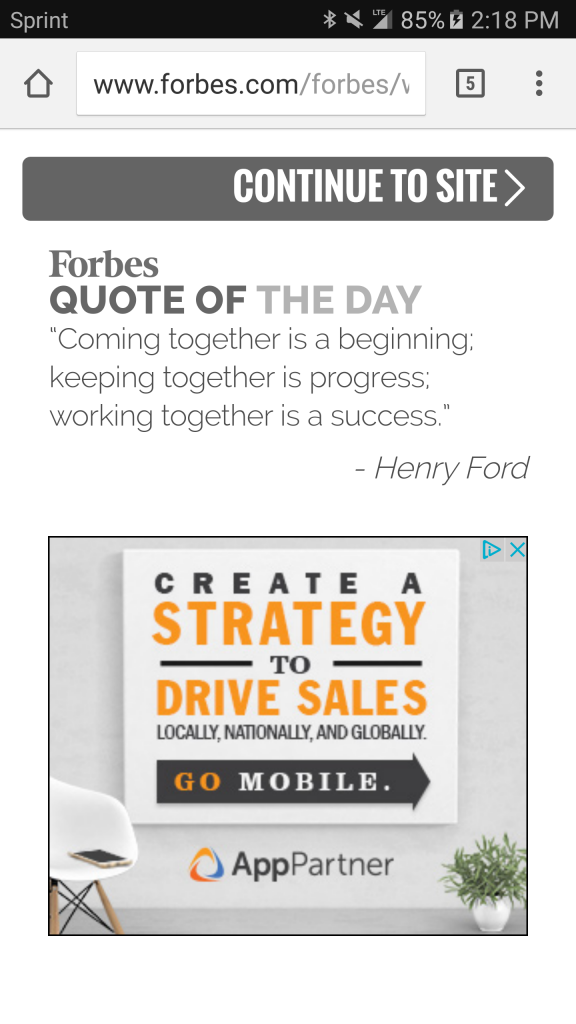 An Instant App can cut through the noise and take users straight to the content they’re interested in. By showing users a simple interface of the video or article they looked up, as well as a few suggestions of related content, you’re giving the user a peek at the potential your full native app offers. This may be just what you need to convince more people to download the native app. And if not, people will still be drawn to use the Instant App due to its simplicity and ease-of-use.

Media apps are often more popular and usually savvy enough to have both a usable mobile site and native app. The problem here lies in making users choose. Retention falls off when an active choice must be made. Instant Apps make the choice for them. By offering one easy-to-use option, even simpler than either of the previous choices, users are more likely to stick around and come back for more.

Instant Apps will be a game-changer

With the announcement of Instant Apps, app developers can take advantage of a number of new opportunities for growth. Any type of app can find benefits in developing an Instant App. This means analysts and product managers no longer have to worry about vanity metrics like download numbers. By providing such a frictionless user acquisition process, Instant Apps allow you to focus on what matters more: delivering a flawless mobile experience to your users.

Atal Vishwas: Instant apps? It is really going to be a game changer. I need to do more research into it.

Frank: What is this junk for? Am I in the minority that my apps download in seconds? And I’d rather have the full features instead of downloading another portion.