On Going Viral with Siqi Chen

If there’s one thing serial entrepreneur, social gaming pioneer, and product expert Siqi Chen knows a lot about, it’s how to make something go viral.

The Amplitude Datamonster of the Month series is our way of spotlighting product and growth experts who have made data a central part of their success. Through their stories, we hope to empower other industry professionals with proven analytics strategies and advice for leveraging analytics across their organizations._

We select our Datamonsters based on the impact they have at their respective companies. This ranges from how these individuals enable their entire organization to be data-informed to how they leverage analytics to make meaningful product and marketing decisions.

_This month I sat down with our September Datamonster Siqi Chen, Sr. Director of Product at Postmates.

If there’s one thing serial entrepreneur, social gaming pioneer, and product expert Siqi Chen knows a lot about, it’s how to make something go viral. With ten years of experience building his own incredibly addicting apps, as well as in product management and growth at Zynga, Siqi now heads consumer product and growth engineering at Postmates.

As another strong occupant of the on-demand industry, Postmates seeks to be “everyone’s favorite delivery service.” As Siqi explains, Postmates is changing the way local consumer transactions take place–their network of couriers delivers goods from local businesses to consumers who reside within proximity. “As long as it’s available in your city, you can buy anything you want and have it delivered to you in minutes without leaving your couch,” explains Siqi. “Postmates, to me, is a superpower.”

Earlier this month, I sat down with Siqi to chat with him about his own superpower – how he builds (and grows) such successful products and businesses.

Siqi graduated from the University of California San Diego with a degree in Computer Science and brought his technical expertise to all aspects of his career.

He started out doing robotics at the NASA Jet Propulsion Lab and even received a NASA Space Act Award for significant contributions to aeronautics and space activities.

But as Web 2.0 started gaining prominence, Siqi knew he wanted to get into the internet industry. As a software engineer, he forayed into the startup world, first at Webmetrics (acquired by Neustar in 2008), then at Veoh, and finally at one of the hottest startups at the time–Powerset, which Microsoft acquired in 2008 for $100 million, and whose semantic technology underlies Microsoft’s search engine Bing.

But it was Siqi’s side projects that truly struck gold. As soon as Facebook opened up its platformers to developers, Siqi built two games that went almost instantly viral–Mafia and Friends For Sale. Their success grew so serious that Siqi grew his own company around them, called… brace yourself… Serious Business.

Friends For Sale, which by itself had over 1 million DAUs at the time, drew the interest of social gaming giant Zynga. Zynga acquired Siqi’s two-year old company in 2010.

“At Zynga, I was a director of product and General Manager, mostly focused on central product management. I founded a group to oversee product management across all of the Zynga studios,” said Siqi. “But two years in, I wanted to do something different, that wasn’t limited to games. So I started a company called Hey.”

The evolution of Hey and going viral (again) with Stolen

One of Hey’s main products was an automatic journal called Heyday.

“It took all of your photos, the places you go, the people that you see, and tried to organize a story about your life automatically for you, and completely privately,” explained Siqi. “Users really loved it. It was featured as an Editor’s Choice in the App Store, but it didn’t have the traction that we needed to be sustainable. So we started iterating.”

With what came next, Siqi went back to the roots of his initial viral successes and this time launched an insanely popular app for iPhone in early 2016. That was Stolen.

Following a similar theme as Friends For Sale, in Stolen, users spent virtual currency to “steal” people from each other, via their Twitter accounts. The app as described as incredibly “addicting” and had staggering retention numbers–90% of users who downloaded the app came back the next day (compare this to a recent study that showed that the average app loses 80% of their users in the first few days).

“Jack Dorsey, Kim Kardashian, everyone was playing it for about two weeks. Then a congresswoman [Massachusetts Representative Katherine Clark] wrote a letter to Tim Cook and Jack Dorsey and Apple pulled us off the app store,” said Siqi.

Stolen shut down, but Hey started a new chapter of its life. Siqi joined the growth and consumer product team at Postmates when they eventually “acquihired” Hey in summer 2016.

Product and growth at Postmates

“I’m responsible for the consumer side of the business, the core app on Android, web, and iOS,” he said. “I also founded a group called Growth Engineering, which is using product and engineering levers to grow the company. Though I’m responsible for the stuff that user’s see, that’s actually a relatively small part of the business,” he added, noting that Postmates has an operationally intensive underbelly, where the challenges of dealing with multiple partners, merchants, and growing out “fleets” exist.

“It’s a really fast-growing company,” said Siqi. “Our team gets to have a lot of impact here.”

Staying curious about your data

From robotics to social gaming and now to Postmates–when I asked Siqi which part of his career trajectory had the biggest impact on him, he answered with complete certainty: it had to be his social gaming business Serious Business.

“This was before growth hacking was a thing,” he explained.

“Knowing how to get something viral, instrumenting every part of the flow, that’s all pretty growth hacking 101 nowadays, but that all started on Facebook. Having my first company be on the Facebook platform and having done really well has been the foundation of my career. My reputation as a growth person really comes from that experience.”

What about aspiring product managers who want to have a strong growth background?

Similar to what our past Datamonsters have articulated, Siqi says there’s no single path to get there.

“If you’re technical, building a product from the ground up that you have designed and you have coded is, I think, actually the best way to product management. If you’re a designer, then it’s designing something and working with somebody to get something out there. If you’re good at neither, you either learn one of those two skills or convince enough people to help you build you the thing you want to build. The most important thing is to have experience shipping. I’ve always optimized to try to do whatever I can to ship. That’s served me well so far in my career.” 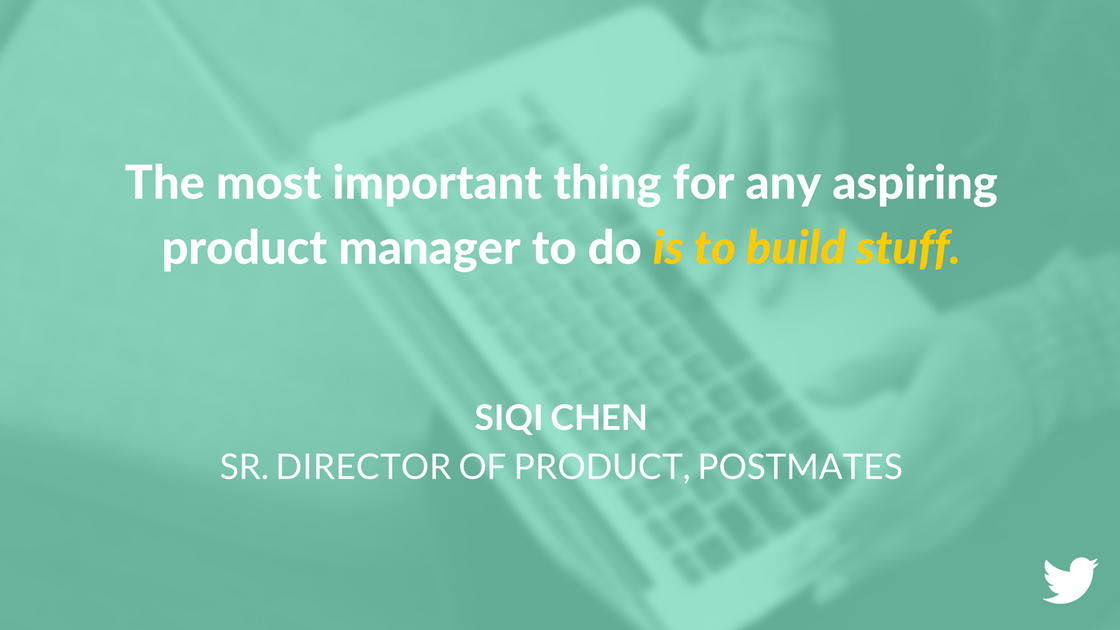 Every product expert I’ve had the pleasure of interviewing for this series gets asked this question (my personal favorite): If you had to describe your job in one word, what would it be?

So far I’ve heard everything from “chaos” to “progress” to “homecoming” and “persistence.”

“[Postmates] is a very complicated business with lot of moving parts. Our team is just the tip of the iceberg but it’s still a large team. We have to not only make sure our own team is in sync, but that we’re also in sync with all of the other groups in the company, because moving one part of the business has a cascading effect through the rest the business. So getting things done in the immediate future is not as easy as it is in a classic consumer company. If we increase demand on this one area, it could totally break the fleets of couriers in a way we don’t expect. There has to be a lot of coordination for a change to be made.”

Siqi has been a user of Amplitude since Hey; now his team uses Amplitude at Postmates.

“We use Amplitude for just about everything in the product chain,” he said, which spans everything from optimizing conversion rates and user flows to analyzing A/B tests and comparing results against various user properties.

“We used the Pathfinder tool pretty extensively when we we were redesigning our sign up flow,” said Siqi. Just last week, they shipped the winning A/B test and significantly increased signup. Siqi’s team also heavily uses Amplitude’s advanced retention features to look at how different behavioral cohorts of users keep coming back to Postmates.

Why Amplitude, as opposed to other analytics tools out there? Compared to other products, Siqi says he likes Amplitude’s speed and power. “You don’t usually get both in one package. It’s the combination that makes it really interesting,” he said.

“The speed of Amplitude allows you to be curious. You don’t need to have something in mind that you’re trying to find in order to analyze the data. You’re able to get insights that you don’t expect.

“Secondarily, the power. We have the ability to slice and dice any report by any custom cohort that we create. The behavioral cohorts combined with the application of that cohort across any report is the thing to me that gives Amplitude the most power.”

Given Siqi’s many years as an entrepreneur and one who deeply thinks about growth, I asked what advice he would give to someone just starting to think about growing their business.

His advice was to take a step back from growth and start with the one place that many eager entrepreneurs often neglect to concentrate their efforts in.

“I would tell them to make sure that they actually have a problem with growth as opposed to product-market fit,” Siqi said. 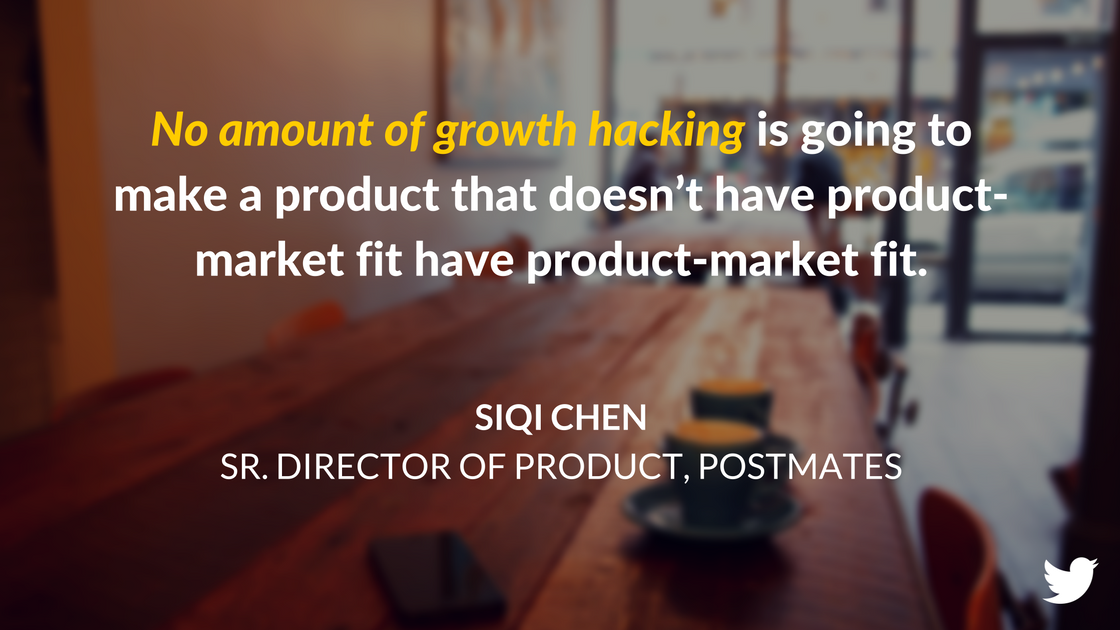 We’re eager to see how Siqi’s experience in growing businesses and building viral products will help take Postmates to the next level.