Why So Many Mobile Apps Get Soft Launched in Australia

If we imagine the perfect launch as a learning exercise—just one step along the path to a great app—then Australia may be the world’s best classroom.

When Machine Zone’s _Mobile Strike _hit the App Store and quickly shot into the top grossing games on iOS and Android, it felt like it came out of nowhere. Today, _Mobile Strike _nets its creators around $700,000 per day and ranks as the #1 top grossing _app _in six different countries.

Considering how fickle users supposedly are when it comes to mobile game adoption, we can safely write this off as simply an Arnold Schwarzenegger-assisted miracle, right?

But _Mobile Strike _didn’t come out of nowhere. For months before its official launch, its developers were studying how people reacted to the game and what got them most engaged. They were constantly analyzing and tweaking, testing out different monetization strategies, nailing down its unit economics. And you could have been a guinea pig in this test—but only if you lived in Australia.

It’s not that different down under

According to Tinder CEO Sean Rad, Australia is a great place for testing new apps or features for two reasons:

“There’s not that much science behind it,” he told The Guardian.

But there is—when it comes to demographics, Australia is about as perfect a soft launch destination as a developer focused on the US/Canada could get.

According to a Pew Research Center study, 77% of Australia’s population owns a smartphone, compared to 72% in the US or 67% in Canada. The GDPs per capita of the USA and Australia are nearly identical, as are their GINI index numbers (which track inequality) and gender percentages. 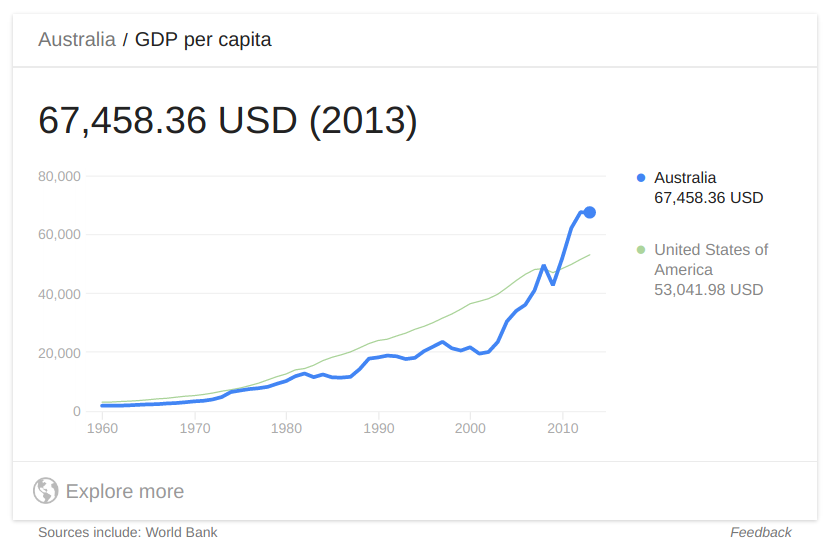 Average hours worked are also very similar between the two countries, data which seems to correlate with another study on how “fun” or “serious” the apps that countries download are. Australia and the United States both seem to enjoy a good balance of fun and serious apps, which is good news for app developers who want to get data they can extrapolate when they do their soft launch abroad.

When it comes to App Store size, Australia pales in comparison to the US and Canada. It ranked 4th among all countries back in 2012 (with one-tenth the revenues of America’s iOS and Android app stores) and 5th in 2014.

A less dense App Store, with less competition, with a population that is demographically almost identical to the United States—whatever Sean Rad says, there’s definitely some numbers to back up the idea that Australia is perfect for soft launching an app.

The analytics you need for your soft launch

Soft launching your app in Australia isn’t some secret shortcut to success. To make a soft launch worth the effort involved in setting it up, you need to be prepared to track crucial user metrics and learn from what you’re seeing.

A buggy feature is leading every user who uses it to end their session and churn out of your app. Another is sticky—users who take that action continue to take it, over and over.

In the below report, every user starts off together at the far left end—where the “Start Session” event (i.e. a user opening the app) triggers the beginning of Amplitude’s tracking. From there, users are tracked through all the different actions they can take and split based on the actions they take next. 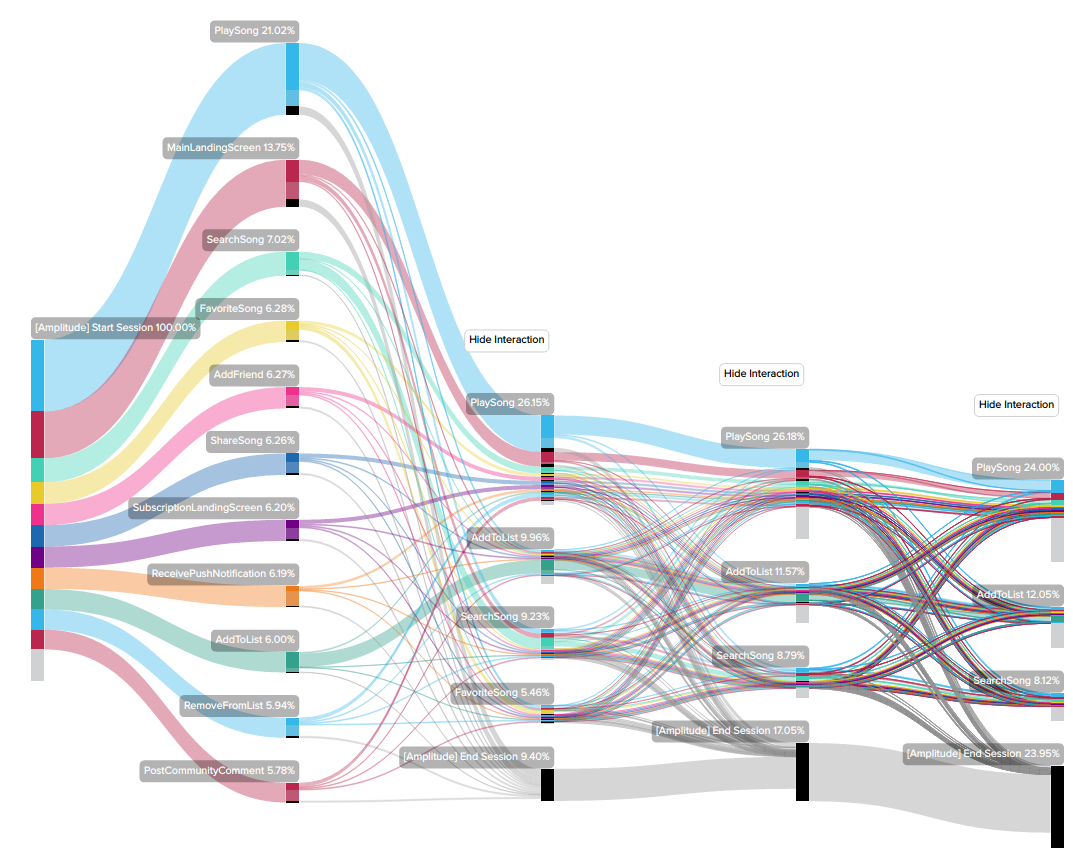 Looking at your flows like this shows you all the different ways that users can get through your app, not just a set of funnels that you think are important. That’s key—when you have to set up all of your own analyses, it’s easy to fall prey to your own biases. [Tweet “To make the most of a soft launch, be prepared to track user #metrics”]

The best way to turn your soft launch into the prelude to a highly successful launch is to use it to identify your app’s Aha! moments.

Aha! moments are the actions and events that make your users experience the magic of your app in a powerful, habit-creating way. After their Aha! moment, users want to come back time and time again. Soft launching is a great way to test different ideas of what your app’s Aha! moment might be and use your learnings to build a better app for your target market.

A tool like Compass can show you a selection of events from your app alongside measurements of how well they correlate with “x”-week retention. In the below chart, we see a list of features from a music app—“PlaySong,” “JoinCommunity,” “PostCommunityContent”—charted according to how well performing that action predicts 2nd week retention. 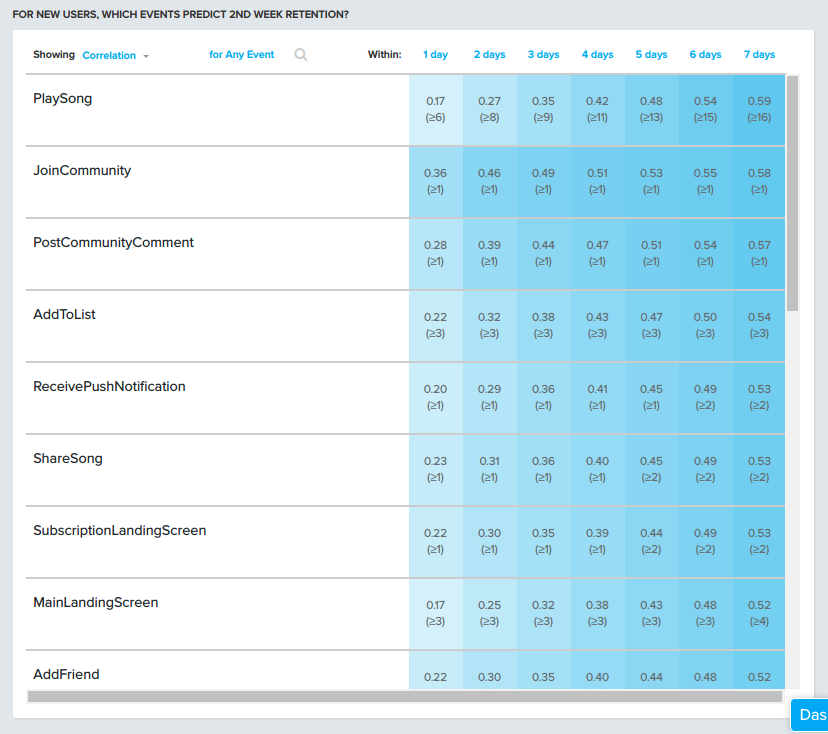 With the darker boxes indicating a higher correlation score, we can say with certainty that the “JoinCommunity” action (2nd from the top) is relatively more predictive of 2nd week retention when performed within the first few days of usage.

Over the first 7 days of usage, however, it’s “PlaySong” that edges it out slightly, with 0.59 correlation to the 0.58 of “JoinCommunity.”

Retention is king. It doesn’t matter how well you acquire users—if you can’t keep them around, you’ll be dead in the water.

Find the features that are naturally sticky in your app by testing it out on a smaller market, revise your onboarding experience and feature-set and keep testing, and when you do launch you’ll have a much better product then when you started.

Many app developers are focused on the wrong things when it comes to launching. They spend all their energy on getting everything perfect in the app, on getting press coverage, on making the perfect Product Hunt posting, and a whole roster of other well-meaning preparations.

The most important aspect of launching, however, is not the launch itself. It’s learning from everything that happens immediately afterwards.

It’s your first users, and it’s understanding how they’re using your app. It’s seeing what gets people “hooked” and where they get stuck. It’s about using data to figure out where you can make improvements, iterating, and then validating your learnings with more data.

And if we imagine the perfect launch as a learning exercise—just one step along the path to a great app—then Australia may be the world’s best classroom.

Australia, we love you. But you’re a great place to launch an app that isn’t ready for the prime-time. Rest assured that the world is jealous of how you get early access to apps like Pokemon Go all of the time.