Why Going Viral is Overrated

Virality after achieving product market fit can transform your startup into a successful business. Virality before fit could kill it.

Startups that prioritize going viral at launch miss a valuable opportunity to learn from their early users and maintain sustainable growth. Launching a new product is not about attracting as many users as possible through referrals. It’s about building a viable product! Remember Magic? The on-demand app that debuted at #1 on product Hunt and got 17,000 users over its first weekend? Or Draw Something? The game built by OMGPOP that was touted as the fastest growing game of all time and acquired by Zynga? Or more recently perhaps the success of Pokemon Go? How do you think the sustainability of these businesses compares to say Whatsapp, which also depends on virality for growth?

Whether you’re a startup or enterprise, growth is a vital part of your success. In an age where going viral seems so important, it might come as a surprise that this shouldn’t be your priority. Most of what you read online about virality will tell you that your viral coefficient (K) should at least equal 1 in order to experience virality. This makes sense. If you aren’t attracting new users at some point in the future, growth will ultimately plateau. But the truth is, having a product that speaks to the needs of your users is more likely to get you the growth you’re after than virality. Virality after achieving product market fit can transform your startup into a successful business. Virality before fit could kill it.

In comparison to metrics like customer churn rate, CAC, and MRR, the viral coefficient (k) has been positioned as a key metric to gauge potential growth trajectory. The viral coefficient compares the number of referrals (e.g. invitations or shares) sent by current users to their network to the rate these referrals become new users. Simply put, going viral is defined as the number of users who sign up for a product or service as a direct result of a referral from a current user. _Related: __The Role of Growth in Mobile Product Development The thinking is, the closer the number is to K > 1, the more likely you are to experience viral growth. This means that every newly converted user will send out additional referrals, which will lead to an exponential increase in users. The more users you can get to send referrals that lead to successful conversions, the better. There are a few ways to calculate your viral coefficient, but this is the most common method:

A value greater than 1 means that for every user you get through organic means (e.g. a Google search), they’ll bring in one new user. So you can see, when K > 1 your users are bringing more and more new users to you. 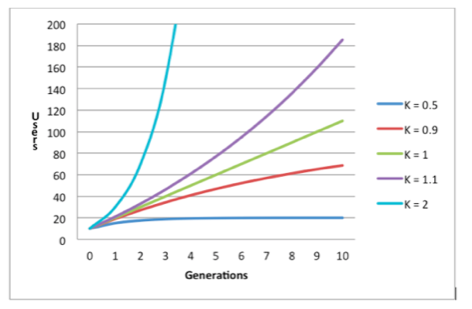 Source This graph shows the trajectory of growth based on changes to K. When K < 1, growth will eventually become flat. Users are inviting new users at a constant rate, and this means growth will level off within some amount of cycles. Example #1: K < 1

Going Viral Scenario where K = 0.5 In this scenario growth fails to take off. Despite adding more users, growth remains constant. Over the course of five cycles, new users only increase by a little over 200 customers. If you have a viral coefficient of say, 2, the story is very different: Example #2: K > 1

There’s more to growth than referrals

Virality is about getting your current users to bring new users back to your product. But if none of them stay, all you have done is wasted resources and time. A more sustainable approach is to build a product that’s a great fit for a specific set of users. If your product fills a specific need, users are more likely to respond positively to it. Once you have fit, you should incentivize the right set of customers to refer their friends! As a product manager, you will need a range of tactics to reach your users, engage their interest and convert them to repeat users. Relying on new users, who have not yet found value from your product to communicate your product to others takes away your ability to position it the way you want to. Instacart, a 1-hour grocery delivery service, has seen steady growth since its introduction in 2012. To aid with its growth, they’ve identified activation– that is, users who visit the site and submit an order– as an avenue of opportunity. By analyzing how new users move through their product and making adjustments to enhance user experience, they’ve seen an increase in conversion rates. This approach has not only increased sales year after year, but it has also allowed them to branch out into new markets. Their referral program is another valuable part of the marketing and growth strategy, but it’s only one tactic they use to attract new users. 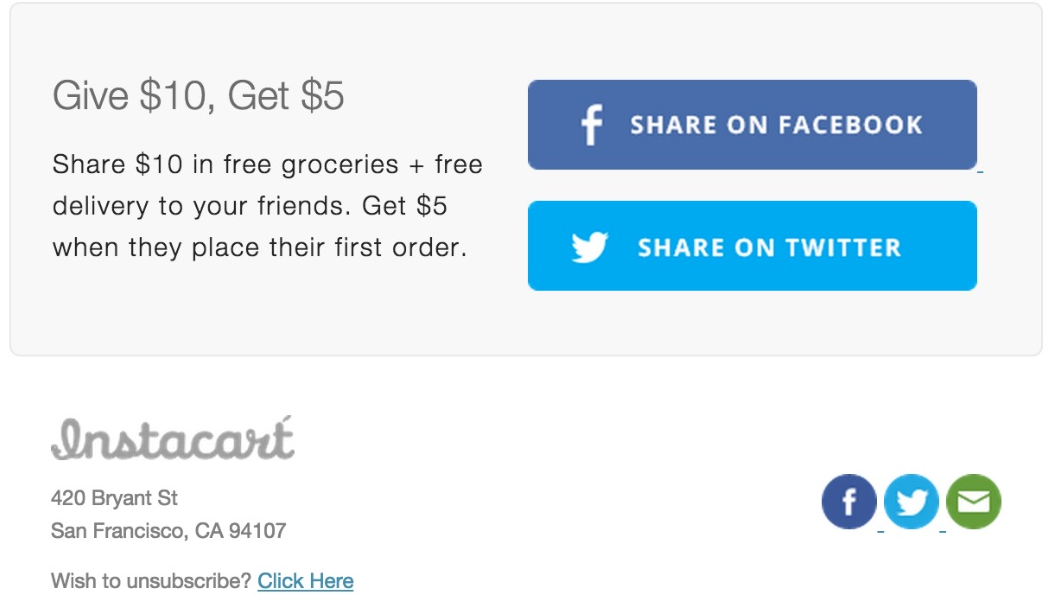 Source New users can quickly share Instacart via Twitter and Facebook to maximize exposure. The benefit is that both the current user and the new users they invite get the discount. This is a great incentive to increase referrals. It’s understandable to want to grow quickly and steadily, but it’s key to not rely heavily on viral growth. It doesn’t give an accurate indication of your potential. Instead, build a solid product management foundation with a well-rounded list of tactics. Use a mixture of tactics like strong user experience, use user data, email campaigns or build your social media presence. The combination of these will spread the word over time.

When you grow too fast too early for your own good

There’s no shortage of startups that saw early traction, built “waiting lists” and then fizzled out. What happened? Their team was focused on how to manage that rapid growth rather than build features that would retain their early adopters and find product-market fit. Even if you had a strong feature set, a poor user experience due to an ill-equipped platform means you’ll lose users. In the case of Peach, a messaging app, their sleek design and impressive features meant they were able to attract thousands of users the day they launched the product. Talk about exploding onto the social networking scene! But just as quickly as they arrived, they saw a drastic decrease in users within a week. Their platform just wasn’t ready to handle the rapid growth. They had no time to develop their infrastructure before their growth took off. Before they could use their user data to improve their product, their users had already left to find the next big thing. Despite the downside of viral growth, there are businesses who’ve made it work and are still hugely successful. Here are companies that were able to survive beyond initial user interest. While their initial growth was based on going viral, their continued growth is based on strategic planning and using a variety of unique marketing approaches.

Going viral isn’t the first step to sustaining long-term growth. Stop looking at your viral coefficient and instead listen to what your users are telling you. If you have power user retention and stickiness, you can implement virality tactics and referral programs that lead to sustainable growth.

Sandhya Hegde is the VP of Marketing at Amplitude, driving our strategy to help companies around the world build better products and win. A graduate from IIT Bombay and Stanford GSB, she is passionate about all things technology and business. Having been a startup founder, VC investor at Sequoia Capital, Khosla Ventures, as well as a product leader—she is an expert on how companies can craft product-led strategies for innovative disruption.