How Product Marketers Can Use Data to Drive Up Adoption

Grow your product with better adoption. Benjamin Brandall, Head of Marketing at Chameleon, explains how to use data to improve onboarding and retention.

Head of Marketing at Chameleon

Most SaaS products are in a constant battle against two dark forces:

It’s a battle to both stabilize the health of your new users, and deepen engagement and adoption for existing users. Since everything in business seems to be some sort of funnel, let’s represent these problems with a quick look at the product adoption process: 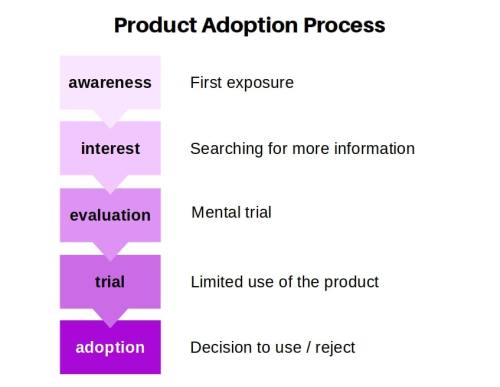 The user onboarding process spans almost the entire funnel above—improvements to your product’s onboarding help move users through every step faster. Hidden in the last step (adoption) is the second battle, to deepen usage and engagement.

In this article, I’ll look at approaches you can use to detect, analyze and combat these problems so you can drive product growth from the inside.

For mobile apps, freemium SaaS, and even enterprise software, nailing the onboarding process is a big problem. 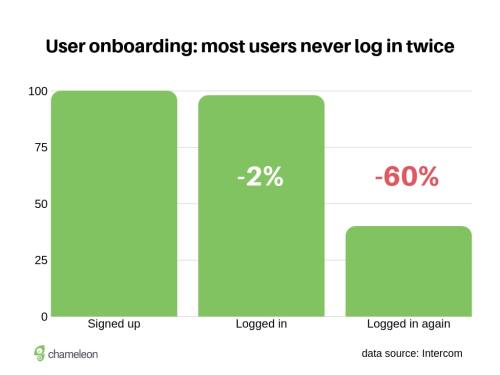 Acquiring a new user costs 25x more than retaining an existing one, so while there’s danger in ignoring first-time use there’s also the opportunity to make a big impact with small improvements.

With Amplitude, getting a look at your product’s onboarding effectiveness is easy. You’ll need to select an event that signifies a new user starting a session in your product as the start point, and then compare that against the number of users that hit a key retention milestone, or aha moment.

Every app’s aha moment is different; a good methodology to find it is to look at the events that engaged users do, but disengaged users don’t do. For an email marketing Every app’s aha moment is different. tool, that could be setting a campaign live or uploading a list of leads. At Chameleon, we correlate whether or not a user installed our Chrome extension with retention. Using Amplitude we found that users who install the extension are more than twice as likely to hit a key retention milestone and stay retained after 12 weeks:

Using Amplitude we found that users who install the extension are more than twice as likely to hit a key retention milestone and stay retained after 12 weeks.

So, you’ve got a signup event and an aha moment. To examine the correlation between them, run funnel analysis in Amplitude and check the percentage drop-off.

No one can tell you what a good activation rate is for your product; it’ll vary wildly based on whether you’re B2B, enterprise-focused, or freemium—basically depending on how qualified your leads are in the first place.

For self-serve products, this is a challenge because unqualified tire-kickers will pollute your data, but over time you’ll set a benchmark. According to Pulse Insights founder Jeremy Bieger, activation rate for free trial users on a low-cost product averages 10%, rising significantly for products with more qualification built into the sales and evaluation process like those with enterprise pricing, paid pilots, or required credit cards during signup.

Assuming that 10% of users end up sticking, by improving that number to 15% you could see a 33% increase in MRR, or even more over time: 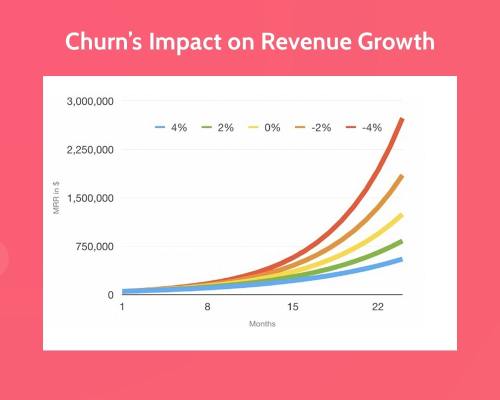 That brings us to the driving action part. How can you improve your onboarding? How do other companies do it?

Take Voxox as an example—an enterprise software company who were struggling to onboard new users to a product they had just launched. It’s not often you get access to other company’s metrics on user onboarding, but we’re uniquely situated to get an insider look at Chameleon. Voxox found that the difference in retention between users that saw an onboarding flow versus those that didn’t was 50%.

Here’s a quick gif of the onboarding flow they built:

Related Reading: How to Choose a User Onboarding Stack That Drives Retention

How to measure feature adoption with product analytics

Solving the onboarding challenge helps you get new users through the high-friction trial by fire of building new habits and skills, but it’s only one piece of the product marketing puzzle.

Engaging existing users by helping them discover new value within your product is equally important. You can have the slickest activation flows, but if users only get value for a month before getting distracted by another shiny object, your LTV will be low. According to UserIQ, nearly 50% of companies surveyed (mainly in the B2B enterprise space) have no formal approach to driving feature adoption.

Assuming your feature has unique, tracked events associated with it inside Amplitude, getting a pulse on adoption is as simple as looking at the total count of uniques and the active percent of users who have performed that event.

Although for a full picture there are more ways to slice the data and get insight. 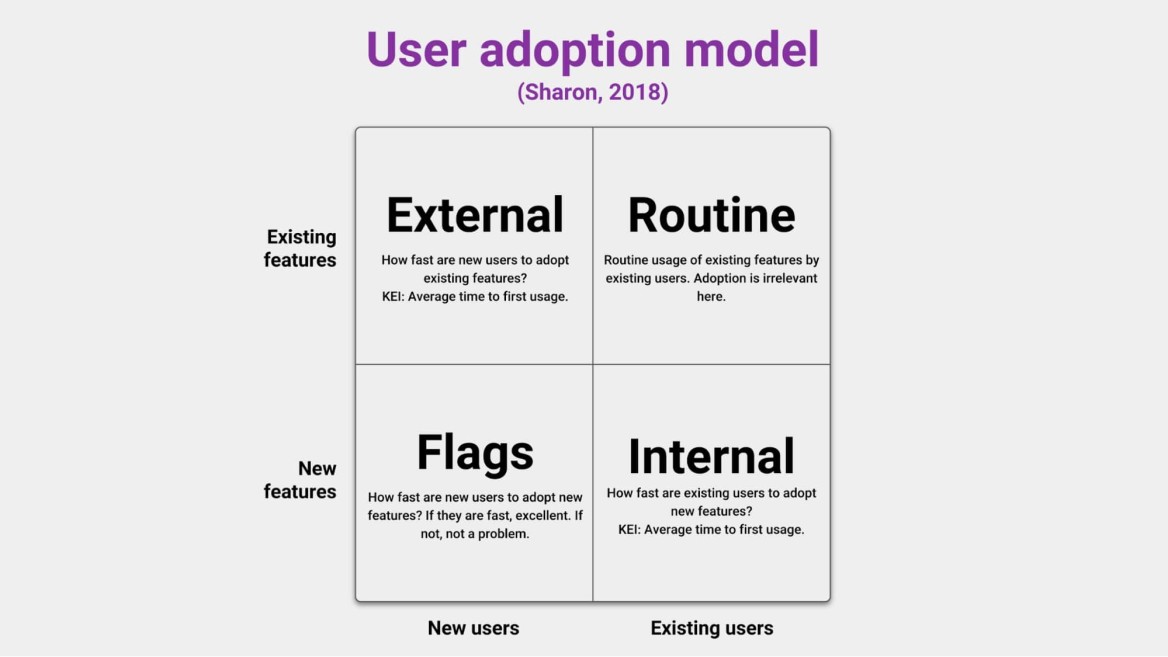 Here’s one way to measure adoption—the percentage of active users that interacted with a feature over time:

Amplitude chart of the percentage of active users that interacted with a feature over time.

In the chart above you can see there was a burst of interest when the feature was first launched, which waned over time before picking up again briefly due to an in-product announcement.

Users not getting deep enough into your app’s valuable functionality is a problem that can be solved from a few angles. To map out how users engage with a feature (and why more users aren’t adopting it), look at your existing feature announcement strategy and the channels that drive the most action.

Urban Airship, a SaaS company that makes mobile marketing software, found that one in-app prompt drove 10% of its user base to adopt a feature upon release. Considering that the industry standard click rate for SaaS emails is just over 2%, the conversion rate boost that comes with a contextual, in-product prompt is huge.

Announcing features in-product is a channel used in launches by a ton of SaaS companies including AngelList, Stripe, and Moz: 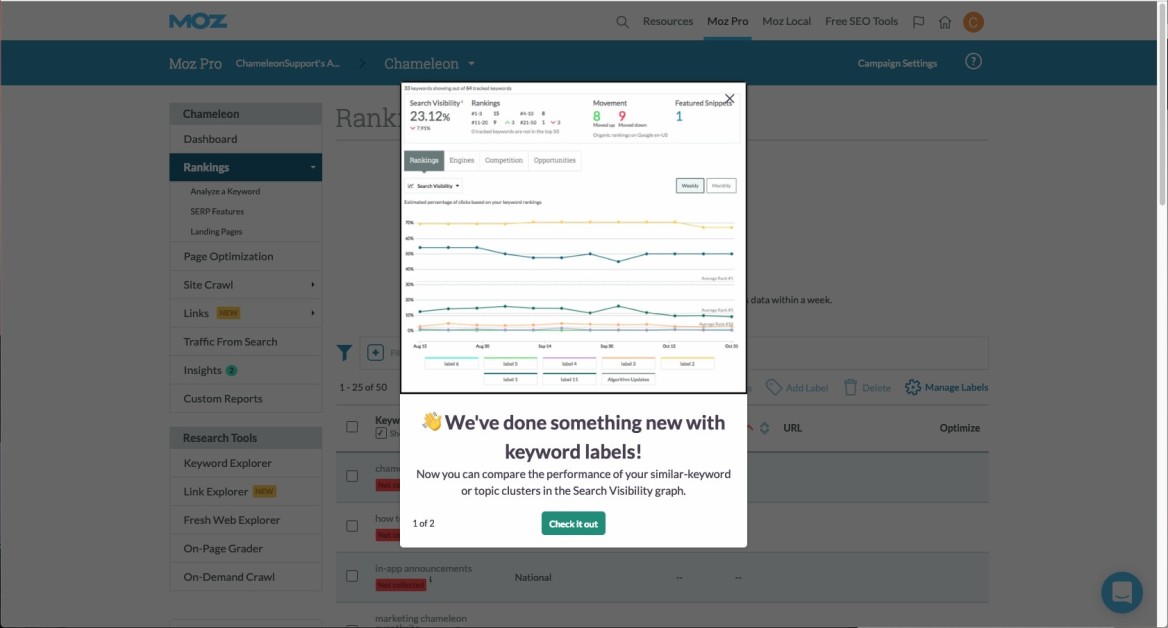 Product Marketers are tasked with both bringing more users into the product and ensuring those users stick. Really nailing the formula to make that happen is part science, part alchemy—because it’s different for every product.

With sophisticated product analytics, it’s possible to query user behaviours and draw accurate correlations between changes you make and factors like activation and retention.

A combination of Amplitude and Chameleon allows you to target in-product prompts to based on your existing user data (attributes, events and segments). With the right stack, Product Marketers can take on the role of scientists, and constantly run experiments that drive product growth. Learn more about the integration here.

Benjamin Brandall is Head of Marketing at Chameleon. When not obsessing over SaaS, he’s probably programming silly bots in Ruby.

There are a few different ways to calculate retention, and it’s not always clear how your analytics platform is defining it.

How to Choose a User Onboarding Stack That Drives Retention

You need this stack of tools to measure, analyze and evolve your user onboarding flow.

How To Increase Growth Through Retention Analysis

Many people don’t know how to analyze their retention in any meaningful way to drive growth and make their app better for both existing and new users.