What Exponential Growth Really Looks Like (And How to Hit It)

Exponential growth is one of the most powerful forces in nature. Here are three quick stories to prove it:

Facebook, the Manhattan Project, and Australia’s rabbit infestation were all driven by this one force. Alternately cute (rabbits!) and terrifying (the nuclear bomb), exponential growth can start from what seems like nothing to create huge explosions and worldwide phenomena.

The basic concept behind exponential growth is that the growth rate of a population, your revenue, your user base, or whatever, increases in direct proportion to its size. With this model, growth is constantly accelerating.

Take two rabbits and let them breed, and within a very short period of time you’re going to find yourself with six rabbits. The original two can and will begin mating again instantly, while the babies will need a few months to grow. Nevertheless, you’re going to have a lot of rabbits very fast.

You can model any situation of exponential growth as a relationship between a variable _x _growing at a rate _r _to the power of _t_, or time. 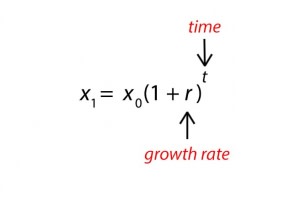 That equation may look complicated, but all it’s really saying is that your current growth rate exists in some kind of proportion with your current size. Let’s say our r is 1—meaning our current value doubles each time we measure it. If we have a company with two paying customers in the first month and double that each month, the first eight months would look something like this:

Having a paltry 256 customers after eight hard months of work doesn’t sound like the transformative work of exponential growth. However, consider that this is the same force that drives nuclear chain reactions (as well as rabbit infestations). Look what happens through 2017 and 2018 if that exponential growth keeps up:

By the end of the summer, you would max out your user base because every single human on earth would be using your product.

Some entrepreneurs believe (or act as though they believe) every concave graph is “exponential.”

During the BP oil disaster, the company pulled out charts to show how the amount of oil it was collecting was increasing over time—demonstrating that their cleanup effort was improving. The consultant Stephen Few quickly noticed a problem with the following visual: 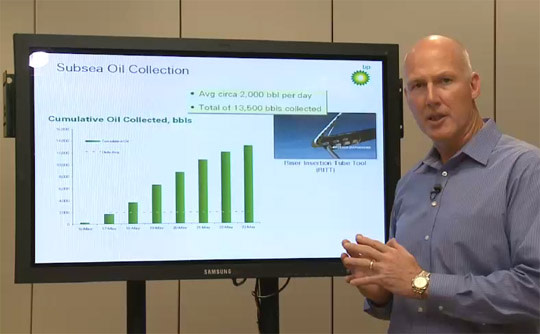 “Although the graph doesn’t outright lie,” Few wrote, “BP is relying on the viewer’s assumption that a series of bars that increases in height represents an increase in performance.” In reality, he said, the amount of oil BP was collecting from the water looked more like this: 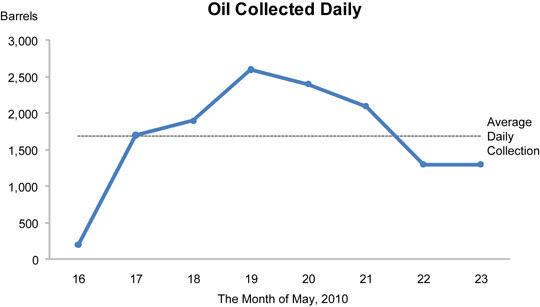 The bar chart was designed to make its viewers think that BP was “ramping up” their cleanup efforts at the very same time those efforts were actually slowing down. In fact, the amount of barrels being collected was reaching a six-month low.

You can pull off the same kind of trick with your revenue if you measure it cumulatively. If your new revenue isn’t slowing down as dramatically, you can even make the graph look exponential. Here’s an example:

In this example, new revenue is added in linear amounts (the same amount each time) each month. That proves that you’ve identified one channel that you can pump for double-digit revenue each month, but it doesn’t prove you have something that can become huge.

When you just plot out the cumulative revenue, however, you wind up with a graph that looks like this: If no one’s paying attention to the way you plotted this out, it looks like you’re crushing it. Every month your revenue is pushing you up and to the right. You’ve got a concave curve.

But this is what it would look like if it was exponential growth: 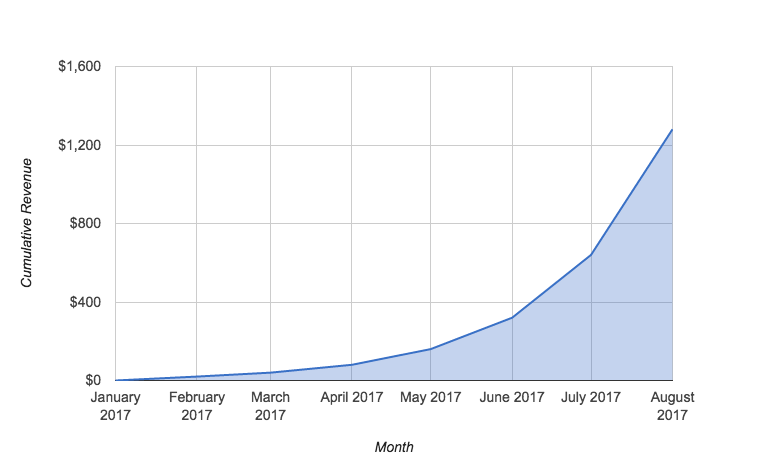 That’s not what you have. What you have is a business that’s growing at a linear rate—by $10 each month. Despite what your cumulative graph looks like it’s saying, any investor you show it to is going to see right through you.

Being explicit about your growth model is important as you map out the future of your product. Too many entrepreneurs build business models assuming they’re going to be able to hit and sustain exponential growth.

Exponential growth in the wild

When Yelp was first starting, they created a little HTML button—it said “People Love Us On Yelp!”—that restauranteurs and other business owners could put on their websites to demonstrate social proof.

They gave small businesses something of value—a little badge that could confer some sense of legitimacy. In return, Yelp received something incredibly valuable themselves: Link juice. Every time a store put one of those buttons on their homepage, Yelp’s reputation grew until they were on the first page—and then in the first results—for basically any local search ever made. The more popular Yelp became, the more legitimacy the “People Love Us On Yelp” badge conferred: a virtuous circle. 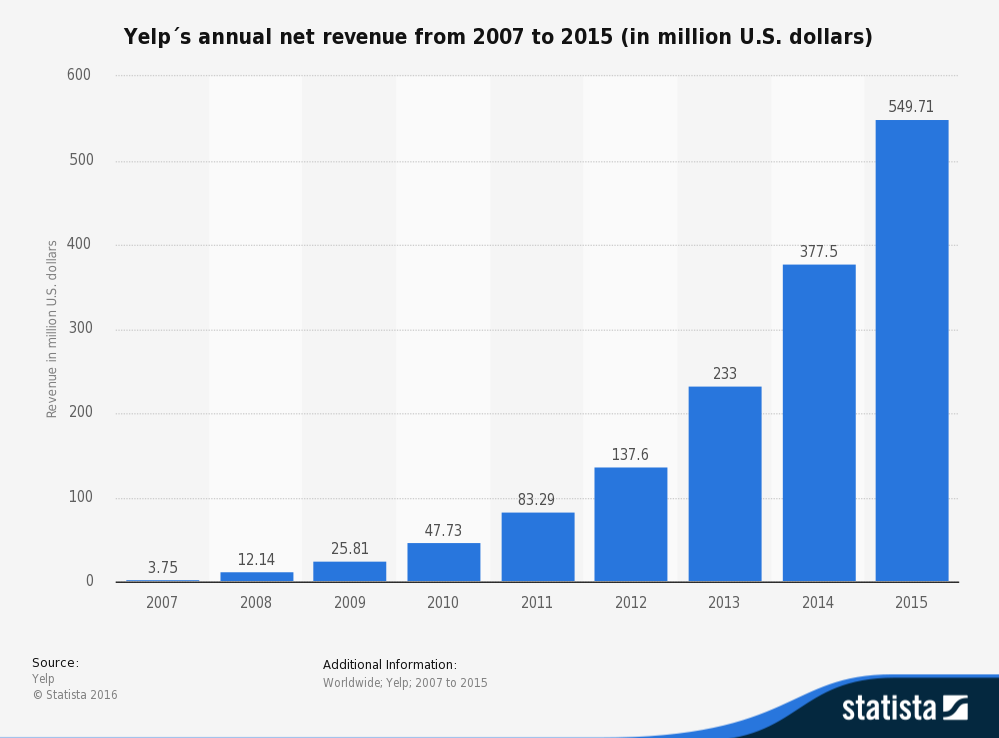 Yelp’s growth relied on user-generated content and the peculiar power of backlinks at that point in Google history. The same mechanism wouldn’t work today, mainly because Google has adjusted their algorithm to prevent backlink quantity from producing exponential returns. This is an example of how understanding available mechanisms and timeliness affect your growth.

No business can grow exponentially forever, or even for very long. Startups run out of money, saturate their market, or their techniques stop working. Or, they become a Google or an Amazon (or a Yelp). 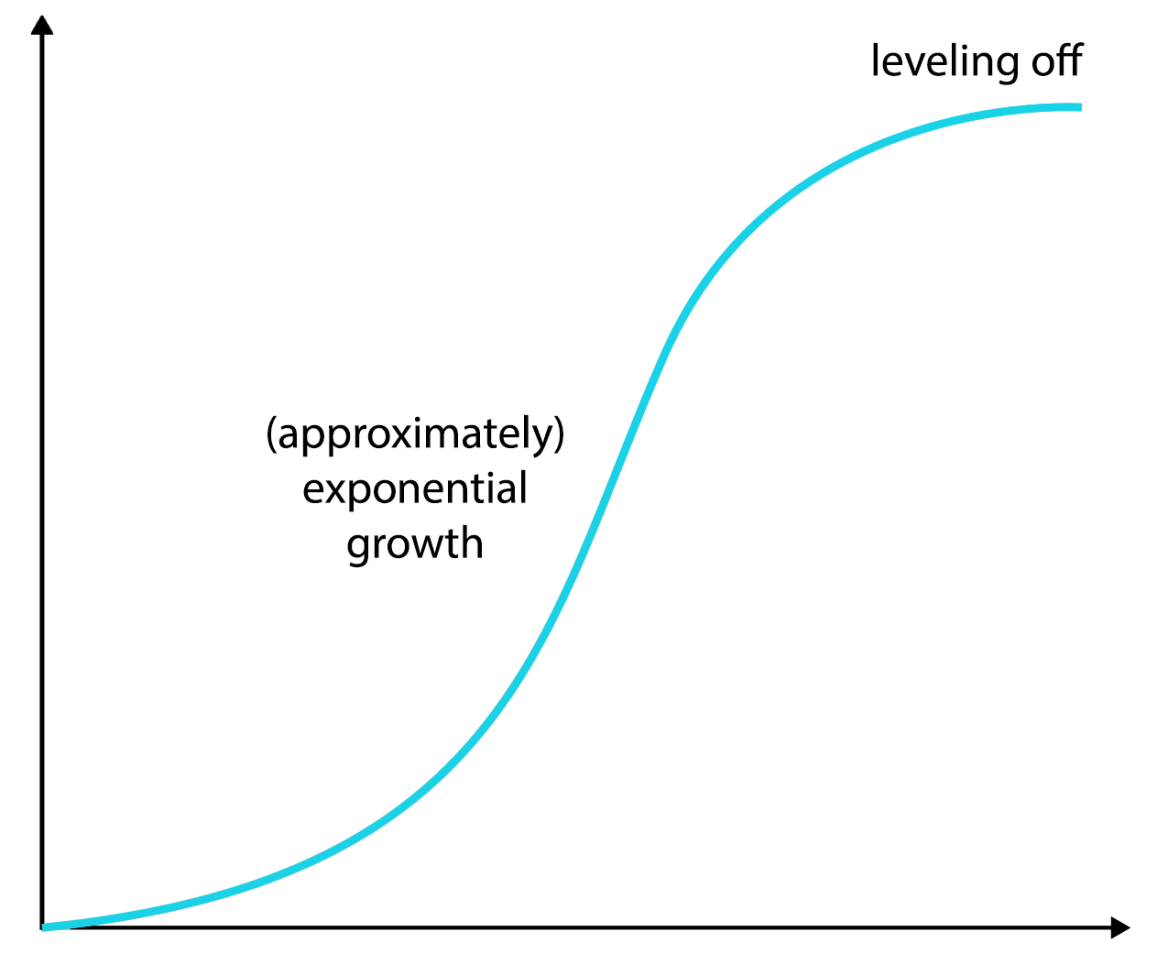 Ironically, it’s the moment when you become too big for exponential growth that you yourself become vulnerable. Exponential growth is what makes startups dangerous. If you can get it and sustain it for any meaningful period of time, you have something very powerful on your hands.

As Paul Graham dryly observes, “It’s hard to find something that grows consistently at several percent a week, but if you do you may have found something surprisingly valuable.”

A three-part webinar series and collection of resources to help you hold onto what matters most: your users.